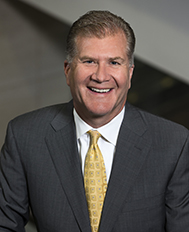 Denny Schleper '83 had a distinguished career on the gridiron at Saint John's. In his senior year as quarterback, he led the Johnnies to an undefeated season and a berth in the playoffs.

Schleper's hard work and perseverance have carried him in his professional life as well. Schleper graduated with a degree in accounting and was in an administrative role in non-profits before joining the firm of LarsonAllen in St. Cloud. Over last 25 years, Schleper has held various leadership positions in the firm. In 2015, he was appointed the CEO for CliftonLarsonAllen, where he oversees a team of 4,500 employees.

Saint John's has also been a recipient of Schleper's leadership and expertise. He has been a volunteer for reunions, class giving, and has been the Class Fellows Society chair.

Schleper received the Bob Basten Award on September 24 at halftime of the football game. The Basten Award honors a former Johnnie football player who has been an outstanding leader as an alumnus. It is given in honor of the late Bob Basten '82, a former Minnesota Viking, business executive and founder of the Playing to Win for Life Foundation for ALS Research.

"Much like Bob Basten, Denny is a natural leader and he inspires people to find the best in themselves and to work together as a team," says Rick Bell '83, a teammate of Schleper's. "To this day, Denny remains humble and true to the Benedictine values he experienced so many years ago at SJU."