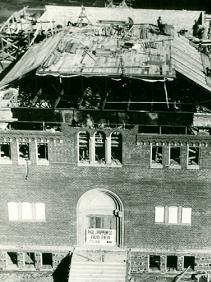 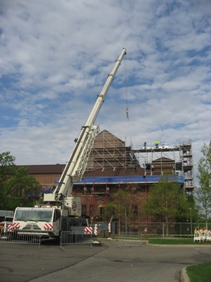 The Auditorium-Music Hall (constructed between 1927 and 1928), is a three-story brick building (with an additional story allotted for stage loft space), which matches the Spanish and Romanesque architecture of Benet Hall (which it is conjoined). Originally, the auditorium featured seating for a capacity of 800 (650 on the main floor and 150 in the balcony) with a control booth and moving picture projector. The building featured terrazzo flooring in the foyer and auditorium aisles, and a fine oaken-beamed ceiling in the auditorium. Stained glass windows lined the sides of the auditorium, featured portraits of great men of poetry, drama, music and oratory.

The second major function of this new building was to house the music department (grouped around the stage on two floors), which contained sound-proof studios, practice rooms, a large rehearsal room together with a music library, and rooms for dressing, wardrobe, and storage. The basement housed a tailor shop, a barber shop, a shoe shop, the bookstore, Liturgical Press, and treasurer’s office.

The construction cost of the building was $100,000 but the total cost with furnishings was $250,000. The blessing of the auditorium and music conservatory took place with two celebrations on May 10 and May 13, 1928. In 1933, a small two-manual and five ranked Wicks pipe organ was installed in the auditorium. In 1948 the stage was modified with a new oak floor and a platform over the orchestra pit (designed by Cloud Meinberg, OSB). In 1950 a new public address system was added by Minnesota Electronics Corp. of St. Paul to keep the sound and music system updated with current technology.

The building underwent a $2.5 million renovation in 1984, which included reshaping and remodeling the auditorium.  A continental seating arrangement was selected, with an upward slopping floor as well as new acoustical and mechanical updating. Air-conditioning was added, the lobby expanded, and the building was made handicapped-accessible by an elevator. The renovated auditorium, rededicated on October 2, 1985, was named the Stephen B. Humphrey Theater in memory of a distinguished English professor who made St. John’s his life and home. New construction on the west of the auditorium included an organ studio and choral rehearsal room. The basement was totally renovated for use by the music department and other campus offices. In 1988 K.C. Marrin constructed a new tracker organ to honor the early Saint John’s music professor, Norbert Gertken, OSB, in the space renamed the Gertken Organ Studio.

For the 1984 renovation, the original wooden seats of the auditorium were refurbished by adding padding and refinishing. In May of 2002 the original auditorium seats were replaced with new theater seating for a capacity of 520. In the summer and fall of 2009 major repair and replacement work was done on the exterior and the copper roof.

A multi-year project to re-roof the Auditorium was completed in August 2011.

The Auditorium-Music Hall is listed in the National Register of Historic Places.