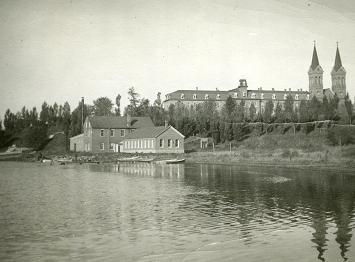 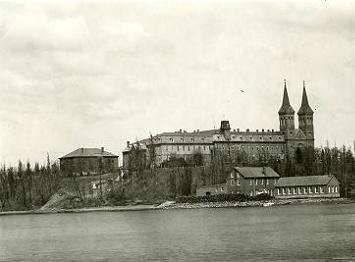 Previous to 1877 the laundering and repairing for the institution had been done by neighboring farmers, whose primitive appliances dealt roughly with clothing although the money paid them was as good as any. It was concluded to build a laundry on the lake shore and operate it under the supervision of a reliable lay brother. The building was begun in 1877 and is still standing. Excellent machinery was installed and Bro. Isidore was superintendent and filled the position for about 35 years. About the same time the first system of waterworks was installed. The pumping station was aside of the Old laundry and the reservoir was a sunken tank a little to the north of the present tower. Before the waterworks were installed the system of supplying the house with water was almost ante-diluvian. Brother Maurus daily drove down to the Lake with a pair of oxen which drew a wagon upon which were two big barrels. At the Lake the good old Brother filled the two barrels by means of a large dipper -- it was in fact a pail with a long handle to it. Then he slowly drove up to the kitchen where the water was emptied into barrels or directly into the boiler on the stove. Such was the provision made for the kitchen. For drinking and toilet purposes we had recourse to the well at the rear of the first brick building (See map). The water of this well was excellent but the process of drawing it was tedious; there were two buckets and these went down and up all day long. Those who had private rooms came to the well with pitchers and carried away what they needed from day to day. In the study halls there were small drinking tanks like those still used in the summer time. In the students lavatory three or four wash-tubs were filled every evening with water from the well and in the morning everyone good-naturally dipped his basin - which had been used by one or two before - into the tub and took out the water he needed, in case any was left. On cold winter mornings we sometimes found 3 inches of ice in those tubs and on such occasions our toilet was rather informal. We were not forbidden to wash with snow if no water was to be had. In addition to the lake and well, there were two excellent springs, one near mill dam and the other near the old brick yard, in the hollow west of the present cemetery.