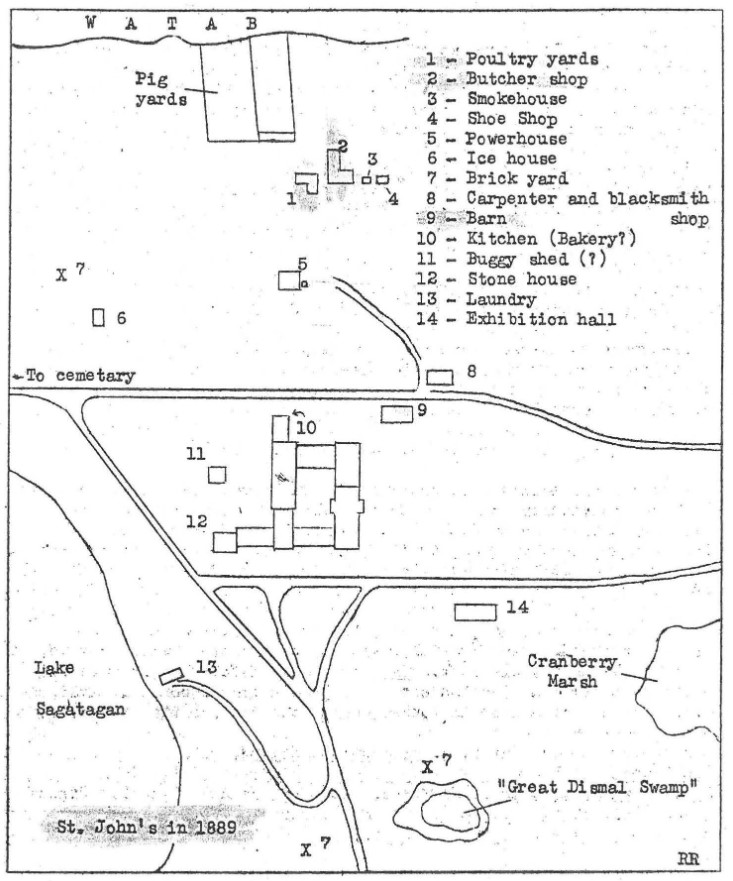 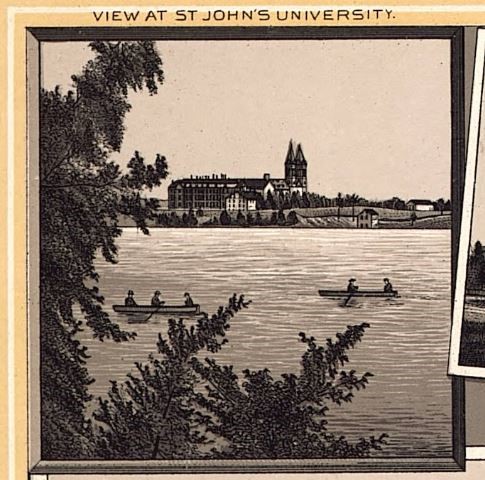 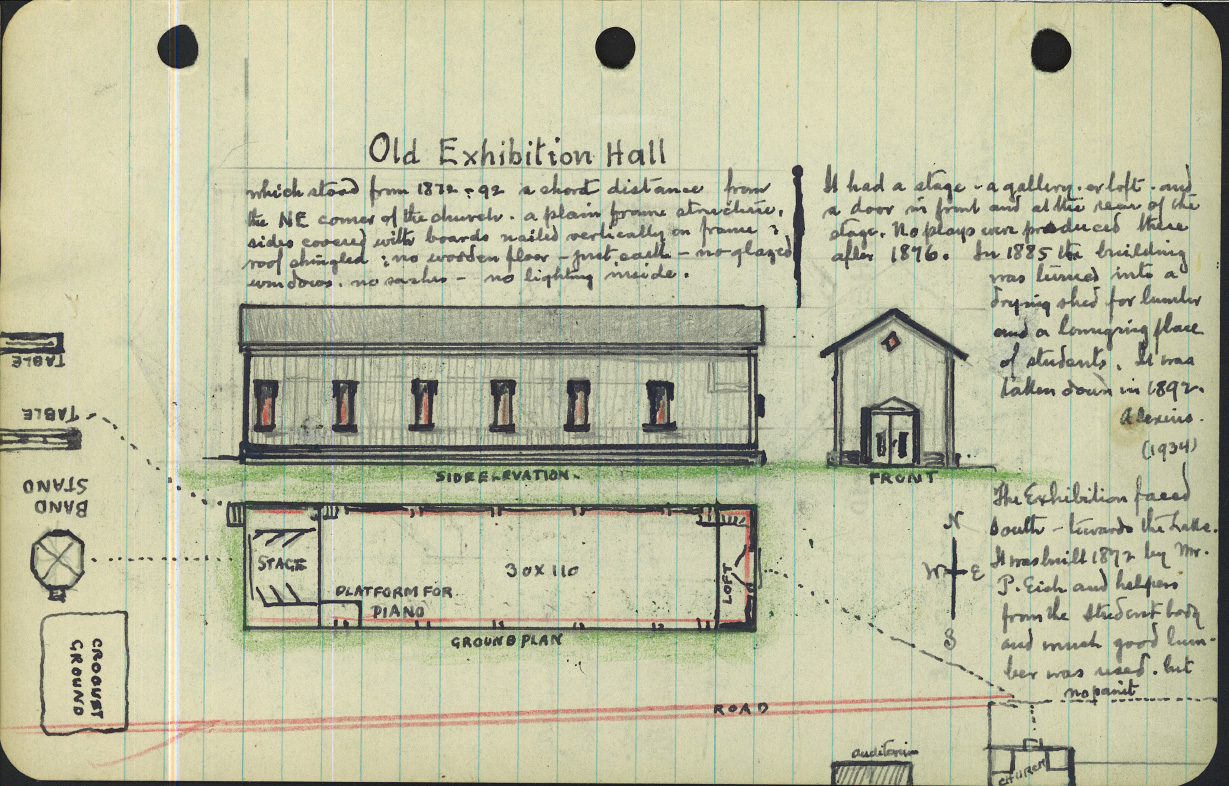 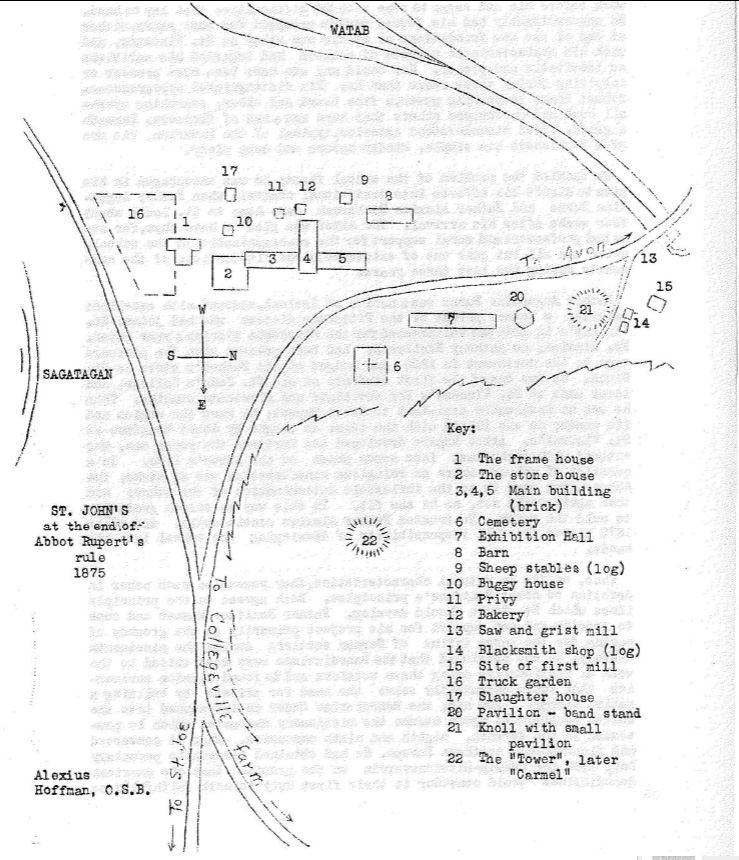 Exhibition Hall was built to provide a venue for “Exhibition Day,” the St. John’s Commencement day, which inaugurated on June 24th, 1868, and for other events.

Alexius Hoffmann describes the first event, before the Hall was built:

“June 24th was Commencement day or as it was familiarly called ‘Exhibition’ day; for it was one of the fashions of the age to make an impressive demonstration at the close of the school term. The students were prepared to make a fine exhibition but there was no hall for the great audience, no stage for themselves. A shady, sheltered place was selected on the south side of the building, towards the lake; here a stage was hurriedly improvised that savored of the best features of the early Grecian theater. The Northwestern Chronicle reported the event in its issue of July 4, as follows: ‘On Monday of last week the first annual exhibition of St. John’s College, situated in Clinton, Stearns County, Minnesota, took place under the most flattering circumstances. About 350 persons were assembled to witness the performance, which we are informed was highly creditable to both students and teachers. The Band belonging to the College, but a few months in existence discoursed most excellent music on the occasion. The exercises commenced at 9 o’clock A.M…’”  - page 25

“This new hall was a plain frame structure on slightly rising ground northeast of the College, was 110 ft. long by 30 wide, without any interior finish, but equipped with a spacious stage, drop curtain and scenery. It served as an Exhibition Hall and for other gatherings as late as 1881.”   - page 38

“The Exhibition [Hall] faced south – towards the lake.  It was built 1872 by Mr. P. Eich and helpers form the student body and much good lumber was used, but no paint.”

It stood “a short distance from the NE corner of the church, a plain frame structure, sides covered with boards nailed vertically on frame; roof shingled; no wooden floor – just earth – no glazed windows, no sashes, no lighting inside.  It had a stage – a gallery, or loft – and a door in front and at the rear of the stage.  No plays were produced there after 1876.  In 1885 the building was turned into a drying shed for lumber and a lounging place of students.”

According to an account by author Minnie Mary Lee (Mrs. Julius A. Wood) of Sauk Rapids, who frequently visited Exhibition Hall after its erection (as cited in Worship & Work, page 114), the Hall hosted “Plays and dramas in English and German, well selected and creditably acted; orations in Greek, Latin, French, German, and English, and oh! Such music, such plaintive and lively, and all sweet and beautiful.”

Exhibition Hall was used for Exhibition Day and other events and gatherings until 1881, and was eventually torn down in 1894.  [Some accounts indicate 1892.]