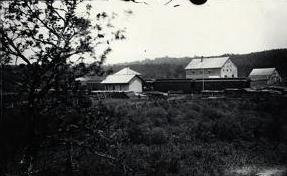 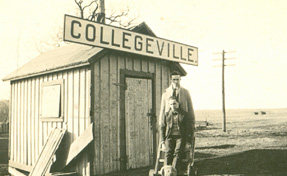 As the work progressed on the church, other tasks claimed the attention of some of the Brothers... Brother Andrew was getting the lumber ready for new houses at Collegeville where the Brothers constructed the station house during June and July [1879], and a house for the station master during July and August. 48 At last, there was a station at Collegeville...

48 The station master's house was the large house on the [north]east side of the tracks. Henry Broker was the first station master.

"July 17 [1879]: The masons went down to build the foundation for the house at Collegeville. It will be 30 x 50 and 20 ft. high. In the center will be a cellar 12 x 18 x 6. The Brothers do the carpenter work. This was the Collegeville station house mentioned earlier. Henry Broker lived there and for many years acted as stationmaster and U.S. Postmaster."

"The station is not in the town of Collegeville but in that of St. Wendel [township]. Up to November, 1879, our nearest railroad station was St. Joseph, 4 miles distant. One of the old Brothers, Bro. Taddy, made that distance every day once with a slow team of horses and a clumsy wagon which carried freight and passengers. It was not pleasant to make the trip in bad weather--say in winter. But in 1879, the year in which our church was begun, Abbot Alexius Edelbrock negotiated with Mr. J. J. Hill of St. Paul for the erection of a "depot” or station at what is now Collegeville. There was no settlement, nor even a building of any description there before July, 1879. When it became a settled fact that there was to be a station and that it was to be also a post-office, both to be known as Collegeville, we built a large frame house on the north side of the track to serve as a residence and grocery store for the station agent, Mr. Henry Broker, brother in law to the Abbot and ex-postmaster of Richmond and New Munich. (His name was really Bröker). Broker conducted a very simple store, and it was not a very attractive concern. I doubt if it ever paid, and I know that it was the occasion of many petty annoyances. About 1898 Andrew Kugler, H. Broker’s son in law, succeeded him as station agent and post master and held the place till 1915. The Collegeville road was built about 1879 also. An older road of which some traces remain was abandoned. Collegeville was made a Money Order office in 1892."

And, from Saint John's University, Collegeville, Minnesota: A Sketch of Its History, by Alexius Hoffmann, OSB (and reprinted in 1907 issues of The Record):

In the course of the summer arrangements were completed for the establishment of Collegeville station on the St. Paul, Minneapolis and Manitoba railway line.  A passenger and freight station house was built in June 1879 and Mr. Henry Broker, who took up his residence in the large frame house on the north side of the track, was the first station agent.  A new wagon road was cut through the woods and thus good old Brother “Taddy’s” daily stage trip was shortened five miles.  Late in summer Collegeville post office was opened, with station agent Henry Broker as postmaster.

NOTE:  A St. John's Abbey photo of the Collegeville Station in 1886 can be viewed on the Minnesota Reflections website. Of the four buildings depicted, one still stands, though it is in serious disrepair [as of 2008].  It is on the north side of the tracks (now the Lake Wobegon Trail); in the photo, only its roof can be seen.

On June 20  th, commencement exercises were held. Eight medals were awarded: the degree of B.A. was conferred on four graduates in the classical course and that of M.A. on 41 graduates of the commercial course. The total number of students enrolled was 243 (39 seminarians and 204 other students). “With the martial sounds of a drum and a fife” the outgoing class marched to the railway station with waving banners and streamers in college colors. The coaches placed at the disposal of the students, and even the locomotive, were decorated with the colors and so the first class of the twentieth century rushed out gleefully, hopefully into the broad field of action.

From Alexius Hoffmann's notes in the Abbey Archives:

"The Collegeville railway station house [was] built on the south side of the track in June 1879. The station house was removed one night in 1900 by the Great Northern Railway Company and transported to Ronneby, Minnesota, where the company had been ordered to build one at once. It was easier to take the Collegeville building and transport it across the river! The whole act was so despicable that for the sake of Mr. Hill, I should much prefer it had never happened."

In consequence of the removal of the Collegeville station building by the Great Northern railway company, the authorities of the institution were compelled to erect near the station some kind of shelter for students and visitors to St. John's. A spacious two-story frame building was erected to accommodate the station agent, Mr. A. J. Kugler, and his family, as well as the post office and express and ticket office.

The private telephone system of the university has been considerably extended recently and now numbers nine instruments within the buildings and a tenth one at Collegeville Station.

In September of 1955, the Collegeville Post Office moved from the Diekmann House to the old workmen's refectory located at the base of Devil's Tower within the Quadrangle.