In the 1960s and 70s, there was increasing emphasis on interpersonal relationships unconstrained by old codes of conduct.  So-called sexual liberation included a growing acceptance of nudity, sex outside of marriage (and the use of contraception), and homosexual relationships.

The SJU and CSB campuses were either liberated or scandalized, depending on one's outlook, by events on campus in the late 60s such as a performance of the Twin Cities' Firehouse Theater, which included nudity, and the increase in contact between the male and female students, who by then were attending co-ed classes on both campuses.

In the age when Broadway's production of Hair brought nudity to the stage in New York, the Twin Cities' Firehouse Theater brought it to CSB in October 1968 in a production called "Trunity."  Reactions were pro and con, and when there was an attempt to bring the company to SJU the following spring to perform their version of "Faust," a debate over censorship and a power struggle ensued.  Approval was denied by the administration, but when a hastily-arranged performance in Avon had to be cancelled, the play was shown in the SJU gym after all, permitted, as stated by Abbot Baldwin Dworshcak in an April 10 press release (Box 2572:2), "to take place only because we wish above all to prevent physical violence on this campus."

Another point of controversy was "The Farm," aka the CEP (Community Education Program), a student-led effort in the fall of 1968 to permit students "to maintain regular class schedules, but also participate in unstructured, individually-styled community living and learning."  This experimental learning community pilot was given preliminary approval by the administration.  Fifteen students, men and women, took up residence in Flynntown, with the women living on the second floor of the old house and the men in a trailer house parked outside.  That arrangement didn't last, as the local landlord was not happy with the tenants, and vice-versa.

A second CEP was formally proposed for 1969-70, with a faculty advisor and the preliminary approval of the Deans: 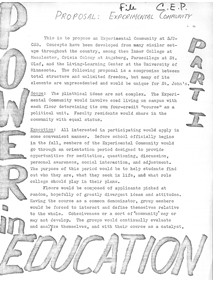 This proposal was not approved by the Presidents who, students felt, succumbed to pressure from off-campus constituencies-parents, alums, and trustees.  (See Brusseau, Mary, "What Happened to Coed Dorms?" The Torch, May 15, 1969, p. 3.)

The next semester, the fall of 1969, the CEP group of ten students moved to two adjoining apartments in Avon. 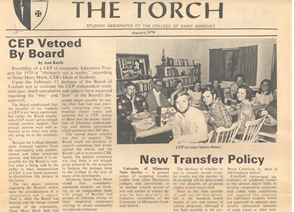 The formal CEP effort seems to have faded as its proponents graduated or left campus.

The CEP did have a measure of success, however: the clamor for choice and experimentation in the educational experience led to the establishment of a Joint Council for Innovations to consider such things as student-designed courses.

A related attempt, to implement co-ed housing in the dorms, was promoted by students in 1969:

"...As Christian liberal arts colleges St. John's and St. Ben's must consider education to be a total personal growth within the personalistic [sic] atmosphere of a Christian living community. At the present time the segregated aspect of our campuses does not allow for the consideration of education from the total life contact perspective. Consequently, the Co-educational Dormitory Community is an attempt to complete education."  (Steve Filipowski, "Co-Ed Dorms: An Attempt to Complete Education," The Record, April 14, 1969, p. 3.)

Plans were drawn up to use a floor of St. Bernard Hall at St. John's and/or one of the Mary Commons dorms at St. Ben's. This attempt was ultimately vetoed by the CSB Board in the spring of 1970.  There was a victory of sorts a year later, however: SJU dorm open house hours could be extended, at the discretion of a floor's occupants, to 10 pm on weeknights and 2 am on Friday and Saturday nights (Community, March 19, 1971, p. 9.).

Articles on/Mentions of The Farm or CEP in the CSB/SJU Student Newspapers, 1968-1970

The Record February 25, 1969.  "Outsider Looks In" By Karen Petersen.  "Editor's Note:  Karen is a biology major at St. Olaf's College in Northfield."

"The Avis Is a Phoenix" by Grant Schampel
"STATEMENT of Tom O'Connell, Chairman of the SJU Educational Innovations Board"
"Comments from the Presidents"
"What Happened To Coed Dorms?" by Mary Brusseau

Compiled in June 2011 from resources in the SJU Archives, and other sources cited herein, by Peggy Landwehr Roske, CSB/SJU Archivist. All rights reserved.