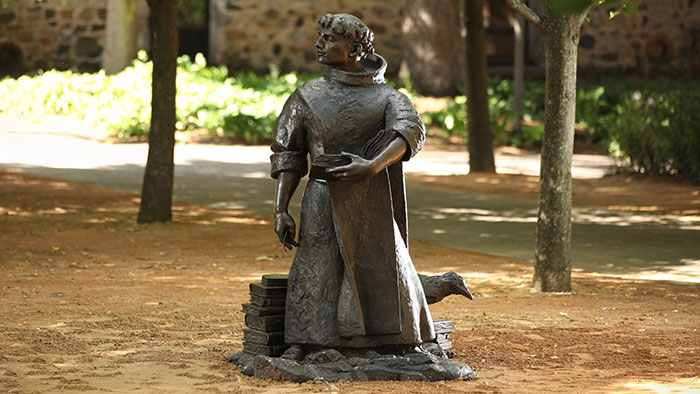 Located in the Stephen B. Humphrey Auditorium Plaza near the Abbey Church and the Great Hall, Saint Benedict was sculpted by David Paul Lange OSB and Steven Lemke (SJU '08) using clay donated from The Saint John's Pottery. The clay was cast into bronze with the professional assistance of former Jerome Foundation Emerging Artist Ben Jose in New York.

Upon completion, the 614-pound statue was raised into the air and set into place on specially fitted pegs and an industrial adhesive. Rather than standing upon a formal pedestal platform, Saint Benedict rests squarely on the earth, facing the modernist profile of Marcel Breuer's iconic Saint John's Abbey bell banner.

Organized by the Saint John's Pottery, the Saint Benedict bronze is a gift from Eugene and Mary Frey in honor of their son, James R. Frey (SJU '78), former chair and member of the Board of Regents. The statue was dedicated and blessed in a public ceremony on June 24th, 2012.