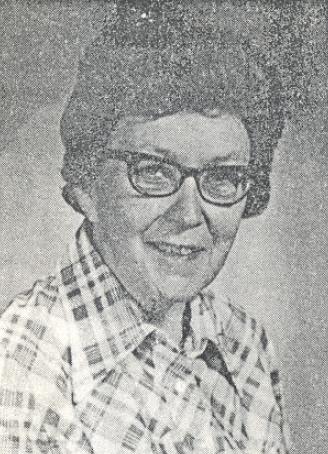 Sister Jeroma Johnson of St. Paul's priory died at Midway Hospital in St. Paul on February 2, 1981 after a short illness. Born at Elk River October 29, 1911, she was baptized Mary Isabelle at the church of St. Andrew. She attended the local grade and high school, and then studied at the College of St. Benedict where she received her B.A. in 1931. Entering the Convent of St. Benedict, she made her triennial vows in 1932.

Further preparation for her teaching followed: a year's study at the Catholic University of America at Washington, D.C. leading to her M.A., study at Fordham University in New York City, and at Marquette University in Milwaukee. She also received her B.S. in Library Science from the College of St. Catherine.

Her teaching took her to St. Patrick's High School in Eau Claire, Wisconsin, to the College of St. Benedict, and to Hill- Murray High School in Maplewood. Her students will remember her especially for her love for poetry and her devotion to Dante. She was an active member of the group of Sisters that founded the priory in St. Paul in 1948, and served as director of the junior Sisters for sixteen years.

Sister Jeroma was a unique person in many ways. Because her mother was of Scotch ancestry, Sister had a love for all things Scottish, even to the wearing of Scotch plaid. She truly loved the study of Scripture. Her disposition radiated cheerfulness and a willingness to listen to everyone. This spirit of concern and compassion won for her many friends, both among our Sisters and among the laity. Her death leaves a vacancy in the community that will not easily be filled.

She is survived by three brothers, Russell of South St. Paul, Garry and Walter L. of Elk River.

At her request, joyful hymns were sung at her funeral Mass, celebrated at the Priory on February 4, 1981 at 4:30 p.m.