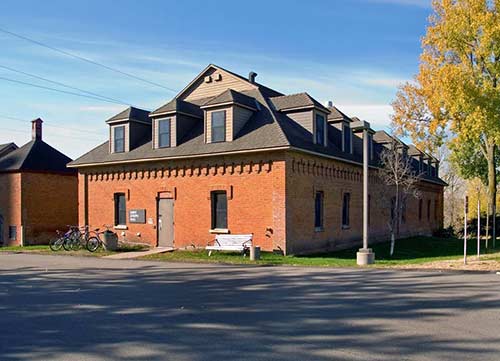 Saint Joseph's Hall, most commonly called "Joe Hall," was in its earliest days built as a buggy shed before automobiles.  It was a place where those coming to St. John's could stable their horses. The present configuration of Joe Hall was designed and constructed in 1923 as a two story brick building for lay employees and workers of St. John's. In its earliest history thirty or more on-campus workers of the Abbey were housed there. Joe Hall became a favorite housing choice on campus because of private rooms and a relaxed Bohemian atmosphere. The basement was used by St. John's for storage until it became the pottery shop for artist-in-residence, Richard Bresnahan, in 1979.  With the approval to build Sexton Commons on the Joe Hall site, a decision had to be made for razing Joe Hall or moving it. Lots of sentiment argued for preserving Joe Hall which is listed in the National Register of Historic Places. A celebration on August 5th, 1992 was planned with bands and past residents sharing memories of the 70 year old dormitory. Joe Hall in its new location near the Power House along county Road 159 continues to house students as it has since 1941.

Joe Hall Floor Plans (.pdf)
Website requires CSB/SJU username and password to access. If accessing from off-campus, you must put "ad\" in front of your username.