Setting the record for longest spaceflight in U.S. history was a drama that played over 355 days for Mark Vande Hei ’89. Getting his feet safely back on Earth took only a few hours on Wednesday, but it culminated several anxious weeks for his family, friends in the Saint John’s University community, and Americans the world over.

Vande Hei had been at the International Space Station since April 9, 2021, working with three U.S. astronauts, another from the European Space Agency, and two Russian cosmonauts. The ISS, which for more than 20 years has largely been a collaborative effort between the Americans and Russians, remained insulated from world tensions that erupted in February with the Russian attack on Ukraine. In the ensuing month, there were mixed messages from the Russian space agency, Roscosmos, as to whether Vande Hei would be allowed to return with the two cosmonauts on a Soyuz MS-19 spacecraft.

Despite any posturing, Vande Hei returned to Kazakhstan with the two Russians and was met by a small crew of scientists and doctors from NASA. Their capsule left the ISS at 2:21 a.m. Central time on Wednesday and made a safe, parachute-assisted landing at 6:28 a.m. (5:28 p.m. Kazakhstan time).

“Mark’s mission is not only record-breaking, but also paving the way for future human explorers on the Moon, Mars, and beyond,” NASA Administrator Bill Nelson said in a statement. “Our astronauts make incredible sacrifices in the name of science, exploration, and cutting-edge technology development, not least among them time away from loved ones. NASA and the nation are proud to welcome Mark home and grateful for his incredible contributions throughout his year-long stay on the International Space Station.”

The capsule landed upright, but winds dragged the parachute and pulled the capsule over on its side. It took half an hour before recovery teams helped all three astronauts out of the Soyuz. Vande Hei was the last to emerge.

Following post-landing medical checks, Vande Hei was scheduled to return to the recovery staging city in Karaganda, Kazakhstan, a two-hour trip aboard Russian helicopters. He then was to board a NASA plane bound for Cologne, Germany, for refueling prior to his return home to Houston. He is eager to see his wife and family, and that he has no plans to continue his career as an astronaut. With an earlier mission in 2018 on the ISS, Vande Hei spent a total of 523 days in space.

“I promised my wife I will not be flying to space again, so that will be bittersweet,” Vande Hei said in an interview recorded last week but streamed on NASA Television on Wednesday. “I’m very, very grateful to have had this amazing opportunity to come up to the space station here with such wonderful people who I consider friends for the rest of my life; to serve my country and all of humanity.”

He also addressed the tensions.

“This is a very challenging time for international relations,” he said. “My hope is that in our attempt to further and find peace throughout the world, that these type of connections that we have can be maintained and serve as a path forward.”

Vande Hei’s stay originally was intended to last six months but was extended in September to allow for a Russian movie crew to visit the orbiting complex and, more importantly to NASA, protect against a crew rotation that would’ve left the station without any Americans on board. As a result, Vande Hei’s extended mission will provide researchers the opportunity to observe the effects of long-duration spaceflight on humans.

Vande Hei completed approximately 5,680 orbits of Earth and a journey of more than 150 million miles, roughly the equivalent of 312 trips to the Moon and back. During his stay, 15 spacecraft and new modules visited the ISS. 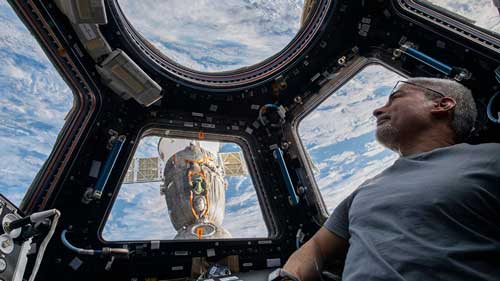 NASA astronaut Mark Vande Hei ’89 dealt with his U.S.-record extended mission of 355 days in space by meditating while looking out from inside the International Space Station's Cupola. He said he routinely awoke before the other astronauts and meditated in the cupola. 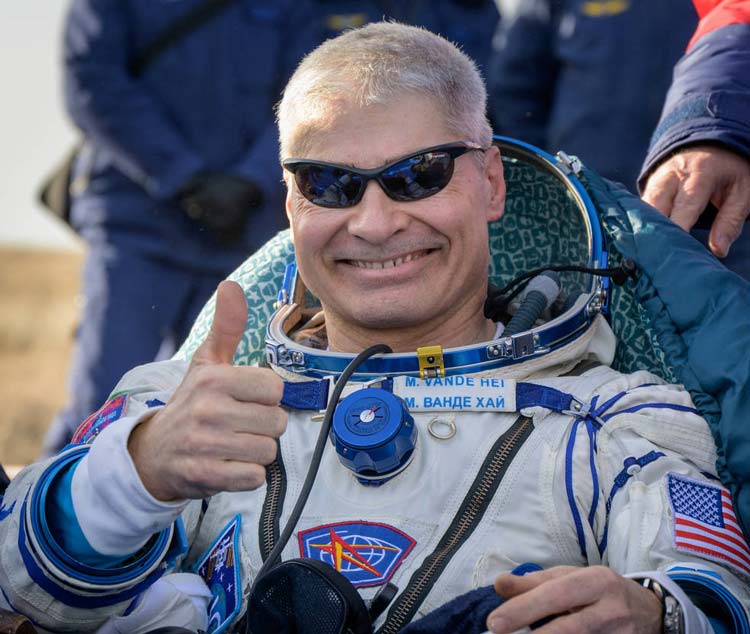