If her goal was to leave the College of Saint Benedict better off than when she arrived, Marissa Johnson ’22 could smile with success when she walked in graduation with 373 other women this spring. She not only earned her degree in nutrition and is en route to graduate school at Mount Mary in Milwaukee, Wisconsin, she played a major role in creating a community for Indigenous students at Saint Ben’s and Saint John’s University.

In 2019, she arrived on campus and felt alone – unaware of other students of similar background. Her spirits also crumbled when, barely a week into her first year of college, she was walking along a hallway at Saint John’s filled with historic photos and noted one that depicted a boarding school for Native Americans. It was one of four boarding schools operated by the Sisters of the Order of Saint Benedict, including an industrial school on monastery grounds in St. Joseph, and another on the grounds of Saint John’s Abbey. The subject was explored in a recent issue of Saint Ben’s Magazine and the schools were among hundreds operated nationwide on behalf of the U.S. government. The Native students were pressured to discard their own culture and convert to Christianity. In many cases they had been abducted from their parents and were subjected to inadequate conditions.

The practice meets the official United Nations criteria for genocide, and it continued deep into the 20th century. The sisters operated a school at the Red Lake reservation until the 1940s. (The school continues today as a Catholic day program affiliated with the Diocese of Crookston.) They also operated a school at the White Earth reservation until 1969. There are people alive today who can recount what attending the schools was like. As for the schools on monastery and abbey grounds, they haven’t existed for more than 120 years.

In any case, Johnson couldn’t understand why the photo was displayed along with other images of which CSB and SJU evidently were proud. Four years later, after she helped form the Indigenous Student Association, the photo has been removed and, of more significance, there has been an awakening of accountability at the schools as well as the monastery and the abbey. One of the first calls to action from the ISA was for CSB and SJU to help convene a task force to coordinate plans for becoming more inclusive broadly and, specifically, how to respond to the history of the boarding schools. Not only did that happen before she graduated, but Johnson also got to witness the awarding of a two-year $59,976 planning grant by the National Endowment for the Humanities to archive thousands of pages of documents and about one hundred photographs held by the sisters related to the White Earth Mission School. Dr. Ted Gordon, a visiting assistant professor who teaches anthropology in the sociology department, has helped secure grant funding and been a resource for Indigenous students on campus.

It’s likely the planning grant could lead to a further grant of as much as $350,000 from NEH to actually do the work of digitization to make the information shareable and searchable.

“It means a lot, but that’s just the short and sweet statement,” Johnson said. “Every day, I’m in awe at not only what I’ve been able to accomplish and my own growth but what Ted and the students have been able to accomplish. Personally, I find myself needing to take a step back to recognize that we did really important work. It doesn’t feel that way when you’re in the middle of it. I’m just so grateful for Ted because he’s constantly reminded us to look at what came of it.

“It’s also kind of a relief, almost, because I know now that any future Native students who come after me have these resources that are in place compared to myself when I entered college. They won’t have to do the heavy lifting that we had to do.”

The NEH grant application was submitted long before the task force first met in January 2022. Gordon, the principal investigator for the proposal, previously helped obtain grants from the Council of Independent Colleges and the McKnight Foundation (involving the tribal community, CSB and the monastery) to fund archival research on Native histories.

The NEH planning grant will be for “Building Protocols for Sharing Native American Boarding School Archival Materials.” Its objective is to create an index of archival materials and develop a digitization plan and intellectual property protocols.

NEH selected the project to be part of its “A More Perfect Union” initiative, set to coincide with the 250th anniversary of American independence in 2026. The work at Saint Ben’s and Saint John’s is one of 245 projects nationwide totaling $33.17 million in NEH funding.

“Being a part of that wasn’t even on our radar when we applied for a grant,” Gordon said. “It’s confirmation that the work we’re doing is important and historic. There were hundreds of these boarding schools across North America. Up to now, only three government-run schools have digitized their records. This will be the first church-run school to come available.”

Funding for the planning grant will go to Saint Ben’s, but the monastery, abbey and White Earth representatives will all consult on how the material may be used.

“How do we share these materials?” Gordon asked. “There are some parts of this history that both White Earth and the monastery will want to make public. There are other things where we’re talking about student records – including some for students who are still alive, and federal privacy laws still apply. These could be somebody’s mother’s school records. Who should have access to them? There’s no textbook for this. We need to have a way where there can be tiered access to the things we digitize.”

It's a sensitive subject. In 2021, unmarked graves of more than 1,000 people – mostly children – were discovered at the locations of Native boarding schools in Canada. That led to increased outcry for investigation into similar schools in the U.S., and last summer Saint Benedict’s Monastery issued a formal apology for its role in that history and, for more than a year now, classes and presentations at CSB and SJU have been preceded by a land acknowledgement referring to the boarding school history.

In May, 2022, a U.S. Department of the Interior report on federal Indian boarding schools was released detailing the policy, history and as a first step to repair the damage caused to Native people. A second report is expected to provide more detail about the long-term effects of the schools, an accounting of their funding, and – most prominently – a list of marked and unmarked burial sites of Indian children who died at the schools. Nationwide, that total is expected to be more than 500 – with some experts predicting it will be much higher as the communal living and poor accommodations made the schools ripe for tuberculosis and influenza.

The task force brings together leaders from the monastery, abbey, CSB, SJU and Saint John’s Preparatory School as well as students and representatives from among the seven Native Nations touched by the four boarding schools. Its members will have a foot in the past, as it relates to the research into the schools, and another in the future, helping form policy and a response. After July 1, when Brian Bruess, Ph.D., becomes the first president of both CSB and SJU, the group will present an overview of its efforts and a plan to foster reconciliation, repatriation and revitalization in Native relations. Bruess will then have input on how the task force moves forward.

“This was the students’ idea,” Gordon said of the task force. “The ISA just wants to be a club, building community among Indigenous students right here. As an institution, (CSB and SJU) has the responsibility for this task force work. It can’t be action from the bottom up. When there are changes that need to be made, those need to come from the top down. The task force necessarily has the support of the abbot and the prioress, had the support of the presidents (Laurie Hamen, J.D., at CSB and Dr. Jim Mullen at SJU) and they’ve helped shape what it looks like. Hopefully, the desire will be there for the work to continue.”

The task force includes 12 members and working groups of four – each dedicated to reconciliation, repatriation or revitalization – including in each at least one member of the abbey/monastery, CSB and SJU (faculty, staff and students), and the Native Nations representatives. Jaime Arsenault, the tribal historic preservation officer for the White Earth Nation, participates on the task force and will help oversee recommendations for how to use the archival materials.

“We were committed, early on, to see this work through even without grant funding, and I’m happy to be working alongside those who had already made that choice,” Arsenault said. “However, with this grant opportunity, I think CSB and the task force will accomplish more in a shorter amount of time. This is key when acknowledging that many of those individuals who attended such schools are now elders. I definitely feel a sense of urgency to create conditions to make conversations possible without trying to rush anyone before they’re ready for that to happen.”

The hope is that one day all information regarding the schools will be available to the students and their descendants, and in some form available for researchers to tell the story of a part of American history that is just now being unearthed.

And for whatever arises next, from a misplaced photograph to any revelation impacting Indigenous students, there’s a task force prepared to help find a path forward.

“With each year that we have been going through this process, our circle of helpers has grown,” Arsenault said. “For me, that is an indication that we are moving in the right direction. None of this is easy work, but it is necessary work and I am grateful that there now is a task force of committed individuals to help us see this through and help build a better future for everyone in the process.”

Johnson, who graduated from Saint Ben’s in just three years, will serve on the task force through the summer before going to grad school. She’s melancholy at leaving the ISA in particular, and CSB and SJU in general, but confident in Moses Wiseman ’23, also a member of the task force, who will be ISA president for 2022-23.

“It’s hard for me to leave because it’s like my baby,” Johnson said. “But it’s amazing to hear the response from students who aren’t in the ISA about how we have such a presence on campus. It’s a student club and my first and foremost goal for it was community building within the entire CSB+SJU student body, not just the Indigenous students. I was really worried in the beginning. How were we going to get people involved? It has evolved into something successful, and I know I’m leaving it in good hands.” Charges for spring/summer of 2022: 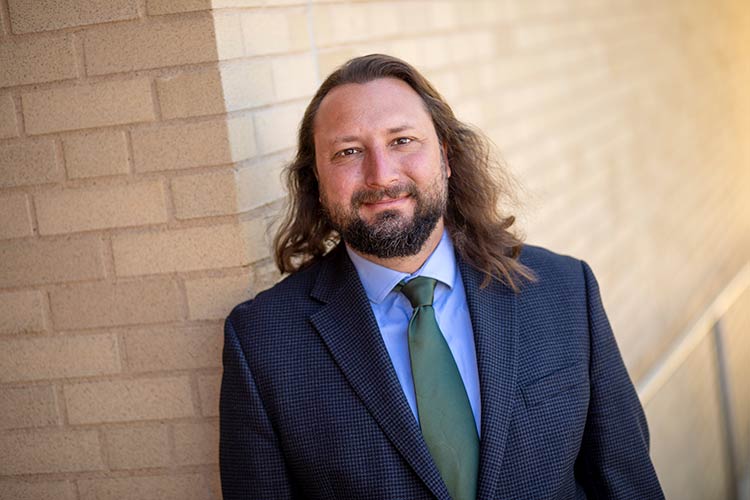