The Saint John’s School of Theology and Seminary (SOT) will continue to strengthen its relationship with the Vatican next week when Kristin Colberg, Ph.D., joins a committee of experts tasked with synthesizing a new document related to the Catholic Church’s Synod on Synodality.

Colberg, an associate professor of theology at SOT and a member of the faculty at the College of Saint Benedict and Saint John’s University, is one of only three North Americans on the drafting committee of 23 people who will gather beginning Wednesday, Sept. 21, at a religious house near Frascati, Italy.

Her appointment to the group, which came during a recent announcement by the Vatican, follows work she did last year as the only person from the U.S. on a commission of 25 experts in theology, philosophy and canon law that convened for the first of three stages of the synod.

“This is the apex of my career,” said Colberg, who came to Saint John’s in 2012. “It is a tremendous joy and honor to serve the Church as part of this historic process.”

Francis called the synod in 2021. Its theme is “For a Synodal Church: Communion, Participation and Mission.” Essentially, synod means to gather or come together on a journey. While synod has ancient roots as a traditional meeting of bishops, Pope St. Paul VI established a modern process, the Synod of Bishops for the Universal Church, in 1965. Francis commemorated its 50th anniversary with an address about the importance of synods and has called for previous versions on family (2014), youth (2015) and the Pan-Amazonian Church (2019).

This synod is different from any other.

“Pope Francis has asked ‘What is the Holy Spirit saying to the churches in this moment?’” Colberg said. “It’s notable that the pope is asking people to share their ideas and experiences and that no topics are off the table. He is trying to involve as many voices as possible in this process – not just those of people who come to Mass on Sundays – so that we can truly hear how the Holy Spirit is speaking in our world and discern how we can respond and walk together as one family.”

The Diocesan first phase collected thoughts and reflections of Catholics at the local level throughout the world. Each diocese submitted a 10-page document summarizing what was heard. In addition to theology, there also were commissions in communications, methodology and spirituality.

In the Continental second phase, the task force that includes Colberg will summarize the response of millions of people in a working document for review early in January by a select group of cardinals and bishops.

The final Universal phase is expected to culminate with the release of a teaching document in October 2023.

“I don’t know if people realize how internationally renowned and respected Saint John’s is in the world of theology,” said Colberg, who has published two books and written more than a dozen articles, reviews, presentations and other publications on the life and mission of the Church. “Saint John’s contributions to the Second Vatican Council, liturgical renewal and ecumenical dialogue are well-known and highly esteemed. Having Saint John’s be connected to this synod is in line with this heritage.”

Members culled from around the globe

The committee has members from 17 countries, including lay people, religious sisters, Catholic priests and an archbishop. In addition to Colberg, the only other American is Fr. David McCallum, S.J., who currently lives in Rome and is executive director of the Discerning Leadership Program. Sister Gill Goulding, C.J., a Toronto-based professor of systematic theology, also represents North America.

“Dr. Colberg’s expertise and Saint John’s are valued by the synod organizers,” said Donald Kettler, bishop of the St. Cloud Diocese. “As a resource, there's no doubt that the most important influence on this diocese over the last 150 years has been the religious communities — all of them, including Saint John’s. Dr. Colberg’s involvement with the international synod process shows that the Vatican is aware of the School of Theology and the work it does, and it wants to draw forth the expertise that’s there to help the whole Universal Church. As a Saint John’s graduate myself, it makes me proud. The fact that she’s a woman and a lay person is significant. I also like that she brings a history of engagement on an ecumenical level. With her involvement in this process, there is a greater chance that we will do more in our diocese because of her relationship to us. I’ve been impressed by her willingness to engage the synod process locally as well as globally.”

Colberg earned previous recognition for work representing the Church on the Anglican Roman Catholic International Commission. Her husband, Shawn Colberg, became dean of the SOT on July 1 after previously serving as associate dean. They have two daughters.

“It’s historic for her to be a part of this because in the past she may not have been a representative in this conversation,” said David Fremo ’99, director of Catholic Education Ministries for the Diocese of St. Cloud and coordinator of the local synod consultation. He graduated from SOT in 2013.

“This information isn’t being prepared in advance by offices or leaders in the Church, it’s reflective of the People of God, as Church, including many voices that aren’t typically heard. Those are the ones God is calling to, and I think Kristin is very authentic to the people who were consulted. It’s mind-boggling to think our kids went to school together and now she’s going to be representing us and everyone else at this table. I know she will bring integrity to the process and, as a lay-woman, I think her involvement speaks to how the Church has changed.”

Following a path of others at Saint John’s

Colberg walks in the footsteps of the late Godfrey Diekmann, OSB, Fr. Columba Stewart, OSB and others. Diekmann, who taught theology at Saint John’s for 65 years, was one of 46 theologians chosen from around the world to prepare the schema on liturgy during the Second Vatican Council (1962-1965). Stewart became executive director of the Hill Museum & Manuscript Library in 2003, has cultivated relationships all over the world with communities possessing historic manuscripts, and has connected Saint John’s to the Vatican via The Saint John’s Bible.

But Colberg also is blazing a trail.

“Kristin is a stellar systematic theologian, as well as a woman who is a mother and married,” said Barbara Sutton, a fellow SOT faculty member and director of the Thriving Congregations Initiative. “She is a well-respected professor by the faculty and students and explores fundamental issues with her ability to illuminate contemporary Church life. Her appointment should be well celebrated because it continues to break the mold of who is heard at the Vatican. These types of positions, until recently, have typically been reserved for male, celibate clergy.

“One of the purposes of the Synod for a Synodal Church is to ask young people to identify the most effective way to announce the Good News today. (Colberg) has her ear to the ground on this every day she is in the classroom teaching future church leaders. She stirs their imagination, pursues their questions and suspends judgment as she engages people. She is steeped in a Benedictine culture that reflects the hopes and dreams of Pope Francis for a return to the ancient Christian practices of pastoral discernment and decision-making and to be a Church that listens.”

Ironically, it’s in that fashion that Colberg also will be heard.

“It’s hard to put in concise words what this means because in a sense a synod like this has never happened before,” Colberg said. “We're developing our path as we go.  I'm proud to do this work for Saint John's and to be a part of its legacy of ecclesial reform.  I am also glad to do it in service to the wider church and with colleagues from around the world.  I certainly know that I do not do it alone.” 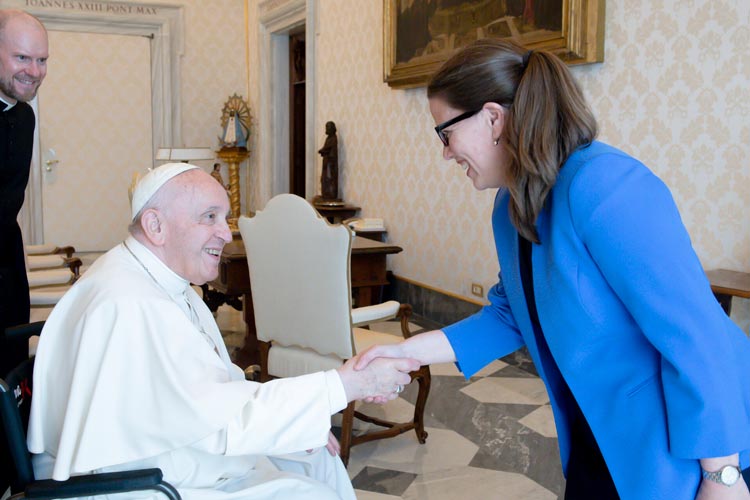 Kristin Colberg, an associate professor of theology in the Saint John’s School of Theology and Seminary and a member of the faculty at the College of Saint Benedict and Saint John’s University, meets with Pope Francis (left) in May during meetings of the Anglican-Roman Catholic International Commission. Colberg and 22 other members of a drafting committee will begin meeting next week in Italy to synthesize a document for a Continental meeting of cardinals and bishops early in 2023. It’s part of the process for the Synod on Synodality. (Photo courtesy of the Vatican)