Numbers have always been important to Joe Kelly.

And there are three big ones that led the 1983 Saint John’s University graduate to conclude now is the right time to step away from his duties as director of Homeland Security and Emergency Management for the State of Minnesota (HSEM), a division of the Minnesota Department of Public Safety.

“The first number would be eight,” said Kelly, who has been in his current position since January of 2015 and previously spent 31 years in the U.S. Army and Minnesota National Guard, achieving the rank of Brigadier General and serving in Iraq as part of Operation Iraqi Freedom.

“Then there’s the fact that I’ve been (with this agency) for 12 years in total,” continued Kelly, who served as deputy director of HSEM for four years before taking over his current post. “Combine that with more than 30 years in the military and it adds up to 42 years of public service. So 42 would be the second number.

“I think this job is important enough that whoever takes my place should get a full four years,” he concluded. “And I don’t want to be selfish and eat away at some of that time. To me, being in an appointed position, there’s just a finite amount of time there. Two four-year terms seem like enough.”

Minnesota Department of Public Safety Commissioner John Harrington – Kelly’s boss the past four years - remembers meeting ‘General Joe’ for the first time during preparations for the 2008 Republican National Convention, held in Saint Paul. Harrington was chief of the Saint Paul Police Department at the time and recalled Kelly – who served as the joint military task force commander during the event - being the most prepared person in the room.

“He never seems to get rattled,” Harrington said. “He’s been the steady hand throughout wind storms, tornadoes, floods, blizzards and, more recently, medical emergencies and civil unrest. No matter how late or how awful things might seem, he’s the voice saying, ‘We got this.’

“He’s the boots on the ground directing help to those in need.”

Those sentiments were echoed by Gov. Tim Walz, who said Kelly has been a steady presence no matter what challenges have arisen.

“Whether it’s a tornado, a flood or a snowstorm on Christmas Eve, Joe Kelly is the first call we make for emergency management,” he said in a statement. “He has continually stepped up to guide Minnesotans through historic challenges – always with calm, steady leadership. He has led a lifelong career in public service, and I am deeply grateful for his leadership and service to communities across Minnesota.”

And there have been plenty of needs to fill the past three years. His job entails coordinating state agency preparation and response to emergencies and disasters. That meant playing a key role in Minnesota’s response to COVID-19 as well the civil unrest that followed the death of George Floyd at the hands of Minneapolis police in late May of 2020.

During 2020 and ‘21, the state’s emergency operations center in St. Paul ran at full activation for a record-shattering 475 consecutive days. Add all that into the agency’s regular natural disaster response duties, including 14  this year alone that have qualified for either state or federal disaster assistance, and it’s made for an unprecedented level of effort.

“We do (hypothetical exercises) all the time,” Kelly said. “And a lot of times we accuse the exercise writers of packing too much stuff in there.

“But you would have never written an exercise that would have had historic rioting occurring in the middle of a global pandemic. We would have said you’re nuts. That’s never going to happen.”

But it did, making for a number of long days … and long nights.

“I had some pretty (bad) sleeping conditions when I was in the army,” Kelly said. “But there were times (during the past couple of years) that I slept on a piece of cardboard in my office. Rolling up my pants as a pillow to put something behind my neck. Because we just had to keep going.  I’ll admit that was hard. But it was hard for everybody. It’s been hard for all Minnesotans to go through all this.”

Responding to the pandemic

At the start of the pandemic, HESM’s primary roles included securing badly needed equipment such as face masks, nose swabs and ventilators, which were all in short supply, as well as taking on the critical task of building a statewide testing network from scratch.

“We knew if we were going to try and control a virus, we had to figure out who was sick,” Kelly said. “We had to know who had it. Testing was really hard to get our arms around. We had someone from the Met Council - Meredith Vadis – who came and worked with us. She previously had nothing to do with the Department of Health or emergency services. But she is a really smart operations person. She came in and started building this testing program, which ended up being the spit test that Minnesota kind of operationalized. And we could do 40,000 tests a day through that.

“But she built it from nothing. So our days would be spent trying to figure out how we were going to this. Where were we going to set up test centers because you had to get them out where the people are. In the end, we built up this testing network all around the state.”

Later, with the arrival of vaccines, the job became finding ways to get them distributed and administered.

“You probably saw pictures of places like the Minneapolis Convention Center and the State Fair to local National Guard armories,” he said. “Those are places where we set up networks for testing, then later for vaccines. A lot of that kind of thing is what occupied our days.

“I would say the average day at the height of the pandemic was probably 12 hours.”

It was truly life-and-death work, which Kelly said took a tool physically and emotionally on both he and his staff.

“Draining is a good word,” Kelly said. “The duration of the pandemic response, even though it ebbed and flowed a little bit, was just relentless. It was always something. If it wasn't setting up testing then it was setting up vaccines. Some of the darkest moments were early on when we had these crises in these long-term care facilities, these nursing homes. How do we get help in there to them? Our elders were there … our grandparents. It just went from thing to thing to thing.

“Relentless is maybe the word I would choose. I put the pressure and the workload of (these past few years) right up there with anything I did in the military - including a tour in Iraq. It was essentially the equivalent. But the thing that made this harder is that when I was in Iraq, I was in Iraq. This was all happening right here in Minnesota.”

And it was impacting not just Kelly, but his family as well.

“My wife Jean, who is a Bennie (class of 1984) by the way, was running the operating rooms at the University of Minnesota hospitals,” he said. “Our oldest daughter, also a Bennie, is an anesthesiologist working at a hospital. Our youngest daughter, sorry, she went to Marquette, is also in health care as a physical therapist. So my family and I were in the same war at the same time. Worse yet, they were on the front lines. And that happened to all sorts of people across Minnesota – people who owned businesses, teachers, day-care providers. Everyone was impacted by the strain of this.”

Kelly credits lessons from his time in the military with helping him keep going.

“After 9/11, I was lucky enough to be a brigade commander as a colonel, and the Army said they needed one of our infantry companies to go to Afghanistan,” he recalled. “I remember calling this young captain and saying ‘Simon, I’m sorry to give you this bad news. You and your soldiers are going to deploy to Afghanistan. Here are some the details, and on a human level, I’m sorry, because I know this is going to change all of your lives and the lives of your families forever.’

Kelly said that call-to-service was ingrained in him during his time on campus at SJU.

“I think it does all go back to what I learned at Saint John’s about community, common good, service, hospitality and just taking care of each other,” he said. “That carried through into my military service.

“In addition to getting my degree at SJU, and having a wonderful undergraduate experience there, I also went through the ROTC program. So I walked off campus with a Bachelor of Science degree in one hand and an Army commission in the other.

Kelly expects to continue finding new ways to serve, even as he enters retirement. But he hopes the playbook that was developed during his time overseeing HSEM, especially during the pandemic response, will prove valuable in the years and decades to come.

“Part of our challenge is that it’s not going to be another 100 years before we have another global public health emergency – unfortunately,” said Kelly, who currently resides on a lake near Lindstrom, Minnesota.

“We’ve also figured out, at least within state government … how to do that interagency work together. We have an organization chart that we didn’t have at the beginning of this which we can now use for the next public health emergency, or for the next mega-storm. We could use it for a technological incident – a cyberattack or a power grid failure.

“Our imaginations have really been opened up. I think we’re a lot smarter and a lot better prepared.” 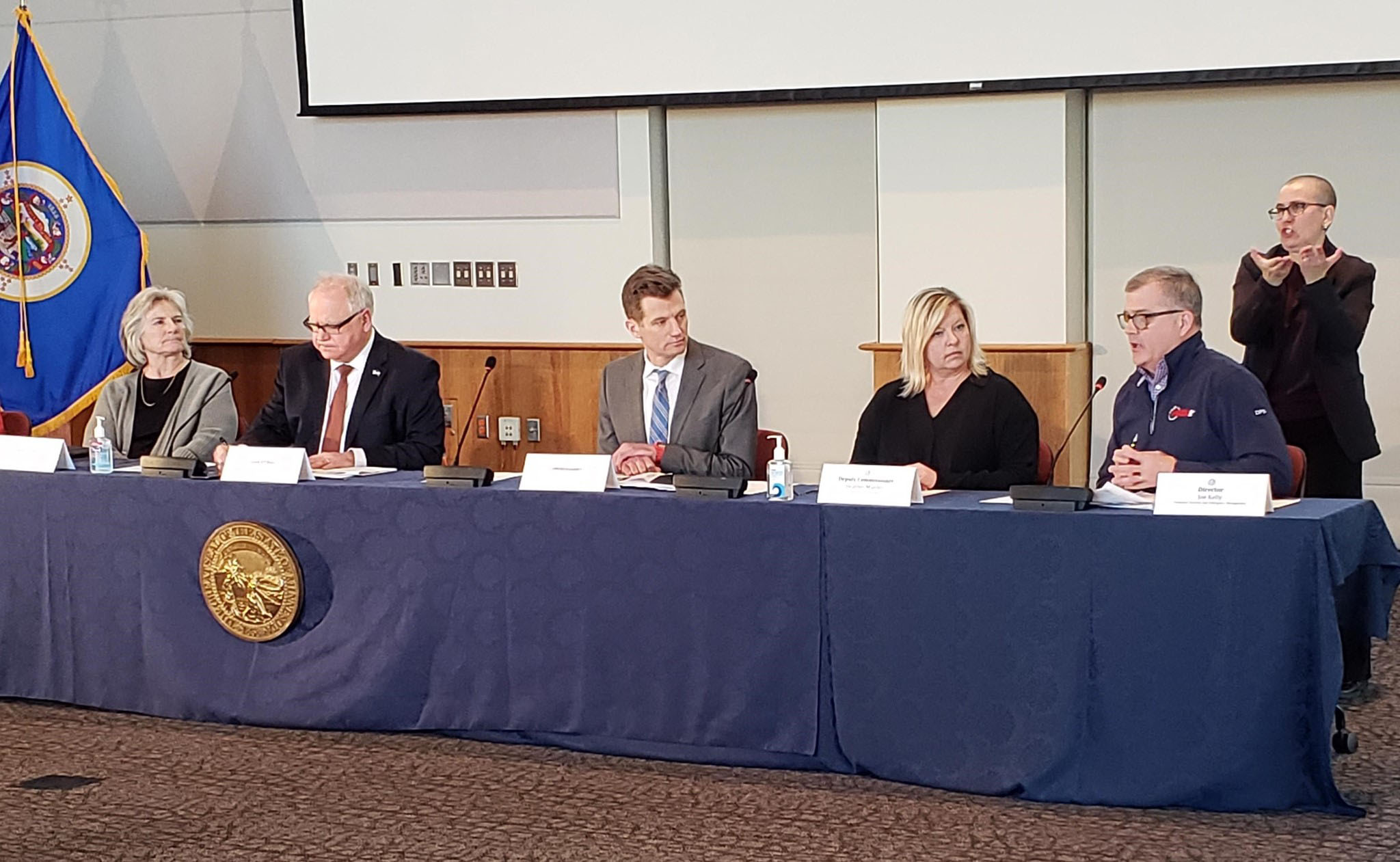 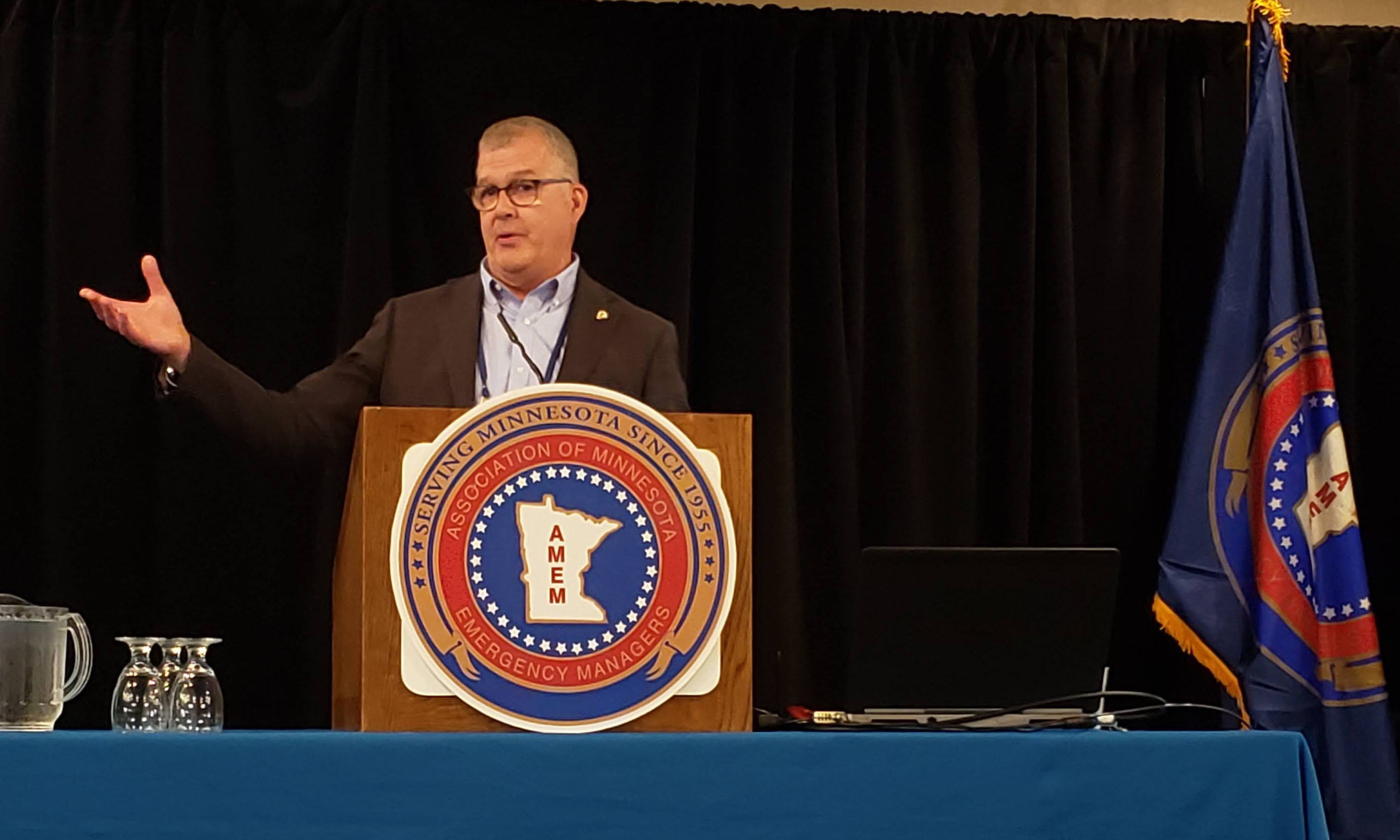 Joe Kelly, a 1983 graduate of Saint John's University, is retiring after an eventful run as director of Homeland Security and Emergency Management for the State of Minnesota.