SJU Fulbright brushing up on Macedonian before departure to southeast Europe

Editor’s note: This feature story on Noah Knapp ’22 is the fourth of six that will appear this summer about College of Saint Benedict and Saint John’s University graduates who have received awards from the Fulbright U.S. Student Program.

Knowing that he has his next year solidly scheduled, serving as a Fulbright Student in 2022-23 at a university in North Macedonia, you’d think Noah Knapp ’22 would be prepared to kick back and relax this summer.

Nope. Always one to be thoroughly prepared, he’s currently in Tempe, Arizona, taking a seven-week course to hone at least rudimentary ability to speak Macedonian.

“I actually know very little at this point,” said Knapp, who is from Aberdeen, South Dakota, and graduated this spring from Saint John’s University with an English degree.

North Macedonia has existed as a country only since 1991, when it gained independence as one of the successor states of the former Yugoslavia, and is bordered by Kosovo, Serbia, Bulgaria, Albania and Greece – where Knapp studied abroad last fall.

“It was a pretty big plus in my college decision that Saint John’s had a study abroad program,” said Knapp, one of six College of Saint Benedict and Saint John’s University students to earn Fulbright awards this spring. “I had planned to do that during my junior year, and my family comes from Germany. I originally was going to go to Austria, but with COVID that fell through. That was the fall of my junior year. The next semester, I was going to go to London, and that fell through. By the fall of my senior year, my options were dwindling, and I decided to go on the Greco-Roman program. My aunt had done that, and she was really hyping it up. I got to go but, even then, the program split. So, I had to choose – Italy or Greece?”

He decided to go to Greece because he thought Rome might be a more accessible destination for him in the future. He also wanted to experience something more foreign to Americans and broaden his religious experience. Greece (like North Macedonia) is largely an Eastern Orthodox Christian nation and neighbors Turkey, which is 99% Muslim and borders Syria, Iraq and Iran.

“I was raised Catholic,” Knapp said. “I still am. I love being Catholic. But I also wanted to step out of my comfort zone. I’d never had a conversation with anybody who was Greek Orthodox. It was a good experience for me to live in a big city. Aberdeen has about 26,000 people and Saint John’s is in the middle of the woods. All my life, I’ve lived in pretty small communities. To move to Athens, where there are 4-5 million people, was totally new and exciting.”

Knapp said the change in political climate and the culture around politics in Greece was distinctly different from the U.S. He experienced many visible protests, usually against the government or the Greek Orthodox church – which are often intertwined.

“All over Athens there were spray-painted signs for Antifa,” Knapp said. “You knew what kind of neighborhood you were in based on some of that (graffiti).”

He found the religious and ancient history fascinating, however, and that made North Macedonia an inviting target with his Fulbright application.

Destined to pass through Saint John’s

Knapp routinely made the dean’s list and became a member of Phi Beta Kappa during his tenure at Saint John’s. His mother, Catherine Cantleberry Knapp, graduated from CSB in 1990 and his father, Michael Knapp, is a 1992 SJU grad. They met just outside the Great Hall prior to a chamber choir concert in which they participated under the direction of Dr. Axel Theimer, who has become a close family friend. So, it’s not surprising Noah found his way to Collegeville, although making that decision was another example of his thoughtful nature.

“Growing up, I was familiar with Saint John’s and then my mom wanted to start me early on college visits,” Knapp said.

The summer after his freshman year in high school, he began his college search at Saint John’s. He was interested in music and met with Theimer.

“Since I was so young, I didn’t take it too seriously,” Knapp said. “Later, I visited again and enjoyed the experience but – this is kind of crazy, I know – I went on to tour, like, 25 other college and universities. My parents were supportive. They wanted me to find the best fit for myself, and in my mind that meant I had to see as much as possible. I visited Saint John’s a third time at the beginning of my senior year, and at that point I needed to make a decision.”

To do so, he made charts of pros and cons, and top-10 lists for the schools he’d seen.

“I realized I was comparing all my other experiences to Saint John’s,” Knapp said. “Once I realized that, it was a pretty clear indicator where I wanted to go.”

Knapp has excelled as a creative writer and was one of nine CSB and SJU students to earn a Manitou Fellowship in 2020. It provided a $7,500 stipend to allow him to concentrate on his writing that summer without taking on additional employment.

Music also has become a major influence in his life. He participated in a jazz ensemble under the direction of Prof. Pete Johnson for three years, and also learned trombone from Prof. Carson King-Fournier. But Knapp eventually switched to piano as his primary instrument, studying under Fr. Robert Koopman, OSB.

“I don’t think music will be a career for me, but it was a big part of my college experience,” Knapp said. “It created a lot of friendships, playing in different bands, but the most important thing I’ll take away from Saint John’s is the friendships I formed throughout college. That’s what I’m most grateful for. The education was amazing, the religious community was very welcoming, and the environment is beautiful. But the friendships, I believe, will last longest and produce the most fruit in my life.”

Knapp knows he will be an English Teaching Assistant at Goče Delčev University of Štip, beginning on Oct. 3. It’s one of five state universities in North Macedonia. Beyond that, however, he’s uncharacteristically uncertain about what he’ll do next.

“That’s a great question,” he said. “While I haven’t taken any education classes, I’m definitely interested in education. Part of being a Fulbright was so I can see what it’s like being on the other side of that equation. I’ve normally been a student. I want to see if being an educator is something that I enjoy, that I’m motivated to do and whether I’m good at it. If it turns out well, I could be interested in education long-term – perhaps something in higher education.”

He’s also considering law school and wouldn’t rule out working as a diplomat. But for now, he’s content knowing he’ll arrive in Skopje, the capital and largest city in North Macedonia, in late September. He plans to run in a marathon there just before school starts.

“Number one on my list is to make friends,” Knapp said. “That sounds a little cheesy. I know I’ll be working with colleagues and students, but I hope I can also befriend them. I also want to understand how North Macedonians view their national identity. What does it mean for them to be North Macedonian? I think I’d have a hard time answering if someone asked me what it means to be an American.” 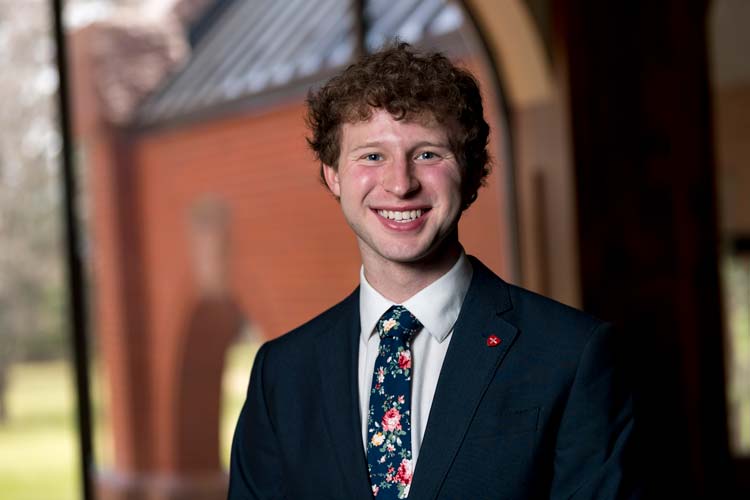