Pedro dos Santos doesn’t necessarily consider himself distinguished. He’s just a 41-year-old husband and father of two who has a couple of dogs, lives in St. Cloud, Minnesota, likes basketball and teaches political science at the College of Saint Benedict and Saint John’s University.

When he comes home and doesn’t take off his shoes in their house, his wife, Cara Langston, really doesn’t think he’s distinguished.

But it turns out the United States government, by way of its flagship program of international educational and cultural exchange, does indeed consider dos Santos to be distinguished. In fact, he has become the first Fulbright Distinguished Scholar in Saint Ben’s and Saint John’s history.

While 15 other CSB and SJU faculty members have earned Fulbright U.S. Scholar awards since 1950, only dos Santos has received Distinguished Scholar status, considered the program’s most prestigious appointment.

“This is a big honor,” said dos Santos, who was born in Rio de Janeiro, moved to the U.S. in 2000, and joined the faculty at CSB and SJU in 2018. “It still hasn’t sunk in yet. I’m thankful that the people here have been giving me the support to teach and advise students and do the things that warrant an award like this.”

The Fulbright Program, created in 1946 through legislation introduced by the late Senator J. William Fulbright of Arkansas, disseminates funds from Congress to students, scholars, teachers, artists and professionals to foster mutual understanding with other countries. Many Saint Ben’s and Saint John’s graduates have received Fulbright U.S. Student awards, which facilitate teaching English abroad and – more rarely – to participate in international research. Just this year there were six of those.

Fulbright Scholar Awards, by comparison, are primarily for faculty and professionals. In 1950, the Rev. Aubrey Zellner ’34, OSB, a former army chaplain in the China-Burma-India theater during World War II, returned to India on a Fulbright U.S. Scholar award to conduct historical research. Upon completion in 1951, he produced a book about the history of education in India.

Fourteen others have followed in appointments representing most continents of the world, although there have been only two in the past decade. In 2014-15, Ellen Block participated in an anthropology project researching AIDS in Lesotho, a landlocked country enclaved by South Africa. And in 2017-18, Patricia Bolanos-Fabres researched Spanish language and literature in Ecuador.

Dos Santos will research political party dynamics, candidate selection and democratic representation in Brazil. It’s an extension of work he developed for his dissertation in 2012 on the Brazilian Gender Quota Law en route to his Ph.D. at the University of Kansas.

“My research was about why (the Gender Quota Law) doesn’t work,” said dos Santos, who leaves July 3 for the Universidade Federal de Minas Gerais in Belo Horizonte, a city of 2.7 million people that is sixth-largest in Brazil. “I spoke to a lot of candidates who believed they were running, and they didn’t get hardly any votes. Where does this disconnect come from? Some parties that have been in favor of the gender quota have tried to strengthen it. Between 2014 and 2018, a big change was there was no more private funding (in Brazilian campaigns). It was all public. All the campaigns go through this pool of public funds, and the parties get funded based on their representation levels. There are debates all over the world about public or private funding for campaigns. The way we do it (in the U.S.) is considered corruption in many countries.”

Under a 1997 law, the Federal Republic of Brazil requires at least 30% of candidates to be women. And a 2009 amendment requires political parties to use at least 10% of their free broadcast time and 5% of their public campaign funds to promote the participation of women in politics. Yet despite the fact that 52% of Brazilian voters are female, according to the Institute for Democracy and Electoral Assistance, through 2018 just 76 of 513 (15%) seats in the Cámara dos Deputados (Chamber of Deputies) and 14 of 81 seats (17%) in the Senado Federal (Federal Senate) were held by women.

Brazil’s gender gap in representation ranks 22nd of 25 Latin American countries, according to the Atlantic Council, a nonpartisan organization that “galvanizes U.S. leadership and engagement in the world, in partnership with allies and partners, to shape solutions to global challenges.” And a central tenet for the United Nations is that equal access to representation in political decision making fuels sustainable economies and benefits societies and humanity at large.

“Women aren’t getting elected,” said dos Santos, who started his teaching career at Luther (Iowa) College. “Some of them have no support and no chance. The parties just put their name on the list, so the list is legal. Sometimes the candidates got less than 10 votes, which means they didn’t even try to campaign. Others maybe got a couple hundred votes, which means they campaigned, but they didn’t know how or have the resources to do it.”

In 2016, dos Santos co-authored a paper highlighting disparity in women’s representation among parties in Brazil. Three years later, after he’d come to CSB and SJU, he helped produce another focusing on extreme non-viable candidacies, citing a need for more information about what the Gender Quota Law means and its impact. In 2021, after dos Santos co-authored a book about a former Brazilian president (Women’s Empowerment and Disempowerment: The Rise and Fall of Dilma Rousseff), he thought his initial doctoral research might be worth revisiting in a Fulbright application.

“My motivation is to raise the voice of marginalized people so candidates can have their voices heard,” said dos Santos, who’ll be accompanied for two months by his 6-year-old daughter, Aida, in an effort to ease the strain on his wife, who will remain behind with their 31/2-year-old son, Arthur. “The school where I’ll be has one of the most respected political science programs in Brazil – especially as it relates to gender. My goal this year is to embed myself with the research groups that are already there because the next state and federal elections are going to be in October … I definitely want to publish some more articles and work with co-authors from Brazil. I’m going to get to know people who don’t know me yet and, hopefully, work with them to open up a larger market publishing in English.”

Thanks to a recent innovation, Fulbright U.S. Scholars can sometimes now “flex” their assignments to split up their time spent abroad. For dos Santos, that was a must so that he would be able to maintain his teaching position at CSB and SJU. He and his daughter will return about a week after fall semester begins on Aug. 29.

“Based on what happens with the election, I’ll know what I want to go back and do for 2023,” said dos Santos, who hopes to bring his entire family when he returns next summer. “I plan to interview party leaders and people who are making decisions about campaign financing and who gets what. I hope to pick a few parties where we can look at different states, because some have national policy objectives, but many don’t. Since I’ll be part of an interdisciplinary network, can we provide a questionnaire that can inform not only my research but that of others, too.”

The administration at CSB and SJU is well aware of dos Santos’ impact. He was the 2022 recipient of the Linda Mealy Faculty/Student Collaborative Research and Creativity Award. It’s given annually to a faculty member who “exemplifies demonstrated excellence in scholarship as well as teaching, conducts student/faculty collaborative research or creative work, and excels in the mentoring of students.”

“Pedro has extensive experience interviewing political actors in Brazil and a strong, established network of collaboration,” said Pam Bacon, Ph.D., dean of the faculty at CSB and SJU. “His research is particularly exciting given his commitment to collaborating with and mentoring undergraduate students. In addition to providing Pedro with the opportunity for more innovative scholarly work, this award ultimately enhances the reputation of CSB and SJU, strengthens classroom instruction, enhances interdisciplinary work and supports undergraduate research, which is a high-impact practice. We’re thrilled to see him recognized and we hope it will inspire additional faculty to pursue the award.”

Whitney Court, Ph.D., chair of the CSB and SJU political science department, has seen firsthand how students have benefitted from dos Santos’ expertise.

“He constantly seeks ways to incorporate students into his research projects, including presenting with them at national conferences and co-authoring published research with them,” Court said. “He even developed a short-term study abroad course where students learned about race and gender dynamics in Brazilian culture and then spent three weeks in Brazil experiencing the culture first-hand. We appreciate his passion for race and gender studies, his Brazilian culture, and his willingness to share that with us all.”

But without the support of Karlyn Forner, a grants partner at CSB and SJU, dos Santos said he never would’ve been selected.

“She read some of my stuff and made my application much stronger,” dos Santos said. “One of the things we talked about was ‘Do you think you’re distinguished?’ It’s a legitimate question because we’re not from a big school and I don’t always have that much time for research. I didn’t know. But we figured, let’s see.”

“Since I got this, I’ve had a few faculty come up to me and say they’re thinking of going for it, too,” dos Santos said. “Hopefully, this shows others they have a chance.”

Below are the 16 faculty who have received Fulbright U.S. Scholar awards:

*Note: Zellner taught at Saint John’s before the faculty at SJU and Saint Ben’s began collaborating in the 1970s 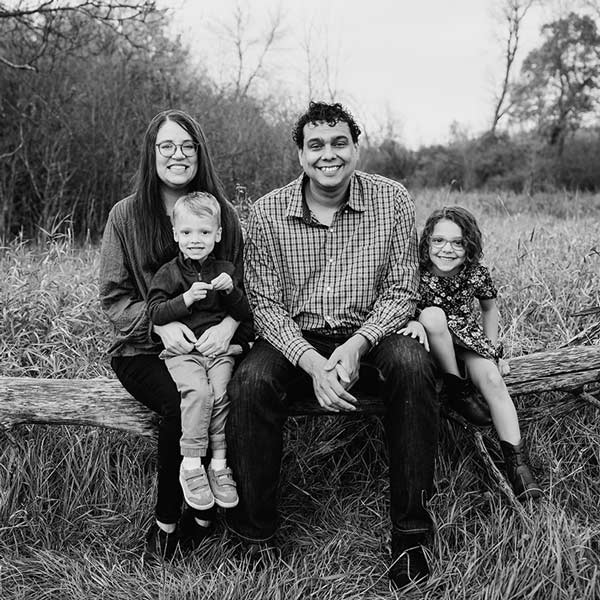 Pedro dos Santos is pictured with his wife, Cara Langston, son, Arthur, and daughter, Aida. Pedro and Aida will spend two months in Brazil this summer as he conducts research for a Fulbright Distinguished Scholar award, the first in CSB and SJU history.