Sisters finally at nationals together as part of CSB dance team

It was the beginning of January in 2020 and College of Saint Benedict dance team captain Kate Dempsey had just returned to campus following the holiday break.

Ahead of her in the new year was the rest of her final season – most notably her last trip to the Universal Dance Association (UDA) National College Championships at Walt Disney World in Orlando, Florida.

And this trip would be extra-special because she would be making it with her younger sister Allie, then a first-year on the Bennies roster.

“It was going to be a really big deal,” said Kate, who like her sister is a graduate of Victor J. Andrew High School in Tinley Park, Illinois.

“We were both so excited because we’d grown up dancing together. We’d been doing it since we were little kids. And now we were about to have the chance to compete together at the national meet.”

Fate, though, had other plans.

“It was our first practice back and we had a big performance scheduled for the next day,” Kate recalls. “Nationals was just a couple of weeks away. We were in the last part of our routine when I came out of a turn and landed wrong. I ended up tearing an (anterior cruciate ligament) and a meniscus.”

And, with that, her college dance career came to a sudden end – as did the chance to make a trip to nationals with her sister.

Or so it seemed at the time anyway.

“She tried to play it off and put on a brave face,” said Allie, now a senior nutrition major. “I think she wanted to stay strong for me, and for the rest of the team. But I knew how hard it was on her. It was hard on me too. I was really sad.

“It was her final season and we were about to get to do this great thing together. Then it ended before it even began.”

But dance sometimes brings a second act. And it now has for Kate, a computer science major who took a job as a power system engineer at a software company in Maple Grove following graduation.

She also remained involved in dance, working as an instructor at a studio while continuing to follow Allie and her old CSB teammates, even lending a helping hand when possible.

“Because Allie has still been here, I’ve continued to come up and watch practices and competitions,” Kate said. “And there are times when I’ve been able to offer feedback or just help out as an extra set of eyes.”

CSB head coach Anne Sumangil was grateful for the assistance. So much so that when co-coach Tori Grootwassink departed following last season, she immediately thought of Kate as a replacement.

“We’ve stayed in touch and she’s such a great technical dancer,” Sumangil said. “So when Tori left and we were trying to figure out what to do next, it just made sense to ask Kate to come in.”

Which means Kate and Allie now have a second chance to be part of the same team at nationals. CSB – which finished fifth in Open Jazz and seventh in Open Pom at the national meet a year ago - returns to compete at this year’s UDA college championships on Saturday, Jan. 14 and Sunday, Jan. 15 in Orlando.

Those interested in watching can do so at VarsityTV (tv.varsity.com/signup), though there is a subscription fee.

“It’s been so amazing having (Kate) here again, especially because this is my last season,” Allie said. “It means I get the chance to share that experience with her. She really has such a great technical eye and she’s helped us all out a lot as a team. She knows her stuff.”

Kate said she’s also enjoyed having the chance to coach her sister.

“I thought it might be a little awkward, but it really hasn’t been at all,” she said. “Allie is always very professional in everything she does and we have such a great relationship that we’re able to compartmentalize the different parts of our lives. When practice starts we are coach and athlete. But as soon as it’s over, she’ll come over and talk to me about her day and we’re back to being sisters again.”

And both sisters are now focused on helping the Bennies compete for a national title.

“I think everybody on this team is really excited to go down there and see what we can do,” Allie said. “We’re confident in ourselves. The fire is burning and we’re ready to go.”

“It’s going to be awesome,” Kate added. “The last time I was at nationals, I was on crutches watching my teammates perform. So to have the chance to go back there now and coach not just Allie, but the entire team is incredible. 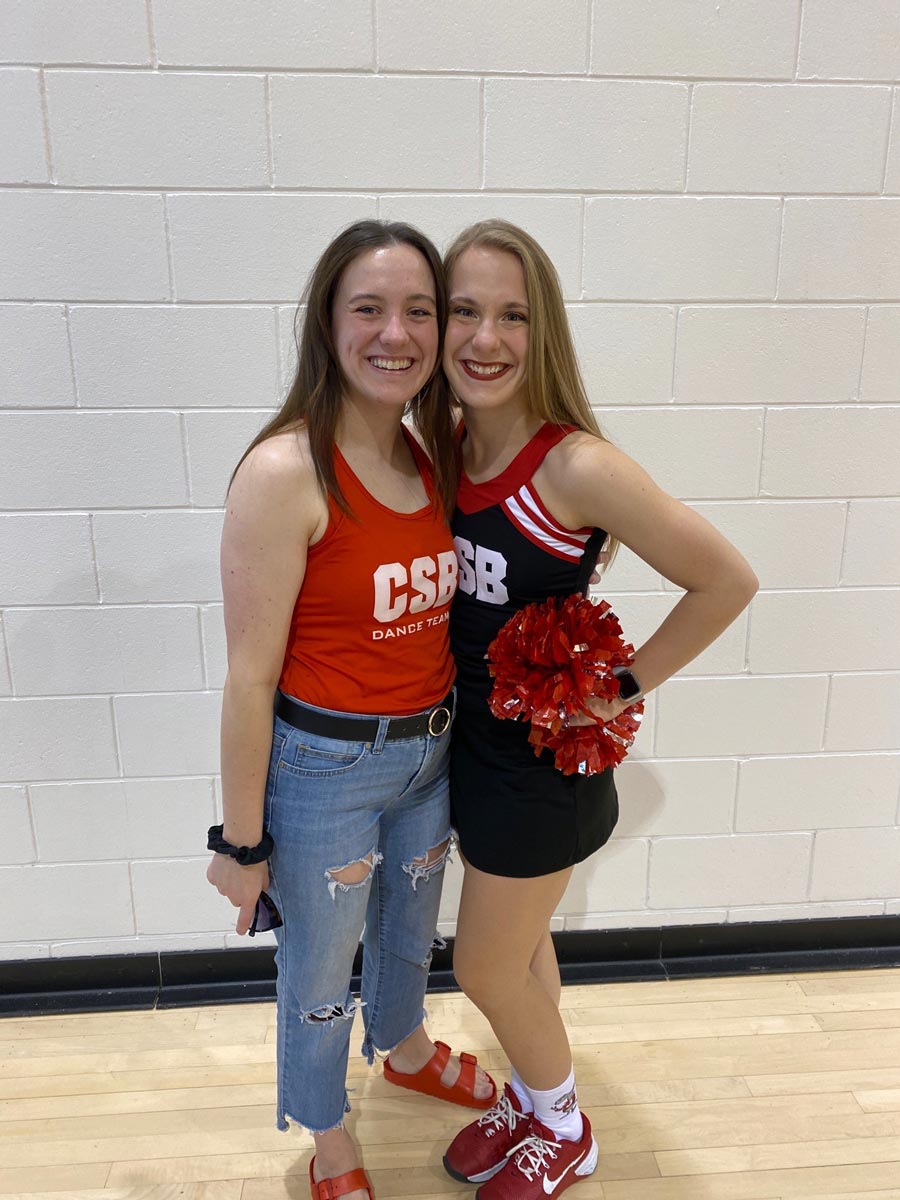 Kate Dempsey (left) is an assistant coach with the College of Saint Benedict dance team. Her sister, Allie, is a senior on the squad. The team competes at the Universal Dance Association National College Championships this weekend in Orlando, Florida.