For more than 10 years, Colette S. Peters ’93 served as director of the Oregon Department of Corrections. On Tuesday, July 12, she became the top prison official in the United States.

Peters, who studied psychology at Saint Ben’s and was the Distinguished Alumna Award recipient at Reunion 2018, was selected by U.S. Attorney General Merrick B. Garland to be director of the Federal Bureau of Prisons (BOP) for the Department of Justice. Peters will assume her federal duties on Aug. 2.

BOP is the nation’s largest correctional agency, with approximately 150,000 federal offenders housed in 122 federal prisons and 178 community-based facilities worldwide. Peters will head an organization that has more than 36,000 employees.

“Director Peters is uniquely qualified to lead BOP in its efforts to ensure the rehabilitation, health and safety of incarcerated individuals, a safe and secure work environment for correctional staff, and transparency and accountability across federal detention facilities,” Garland said. “The Justice Department’s mission to uphold the rule of law, keep our country safe and protect civil rights depends on an effective, safe, humane correctional system.”

Peters has been involved with public safety almost since the moment she left Saint Ben’s. She served as a juvenile counselor in Iowa, worked at a halfway house for gang members in Minneapolis and as a victim's advocate with the Denver Police Department. In 1997, she earned her master’s in criminal justice from the Graduate School of Public Affairs at the University of Colorado in Denver.

In 2004, Peters began serving as the Oregon Department of Corrections’ (DOC) public administrator and was promoted to assistant director. She then was given a second title as inspector general, serving as an adviser to the director. In 2008, Peters and her husband, Lynn Snyder (a 1992 Saint John's University graduate), briefly returned to Minnesota before back to Oregon in 2009, when she was chosen to head the Oregon Youth Authority, a state agency responsible for people who committed crimes prior to their 18th birthday. In February 2012, she became head of the DOC – which has a $1.8 billion budget, 4,700 employees, and more than 14,700 adults in active custody and tens of thousands more on probation, parole and post-prison supervision.

Peters also is the chair of the National Institute of Corrections Advisory Board and a past vice president of the Association of State Correctional Administrators.

“Colette Peters has a proven track record as a visionary leader in the field of corrections and public safety,” Deputy Attorney General Lisa O. Monaco said. “With her experience and judgement, she is the right leader … I look forward to working with her.”

Peters, a native of Milbank, S.D., has six siblings, including five sisters. She and Snyder have three daughters.

“One of the best feminists I ever met was my father, who convinced us all that we could be whatever we wanted to be and do whatever we wanted to do,” Peters said in 2018, reflecting on her evolution through Saint Ben’s and adulthood. “At Saint Ben’s, I was surrounded by all these amazing women who wanted to be leaders, to be agents of change, and who wanted to support each other. The students, the faculty, the Sisters – there were all these incredibly strong feminists there.

“When I look at the core values that I took on from Saint Ben’s, so many of them resonate with our mission today: justice, needing to care for our neighbor, cultivating a sense of community and a sense of peace – it all fits in. One of my passions is teaching the world about corrections, because I think movies and television have created such misunderstanding. Research has shown us that if you treat these individuals like humans, like the Rule of Saint Benedict, they will come back to us and they will be good neighbors.” 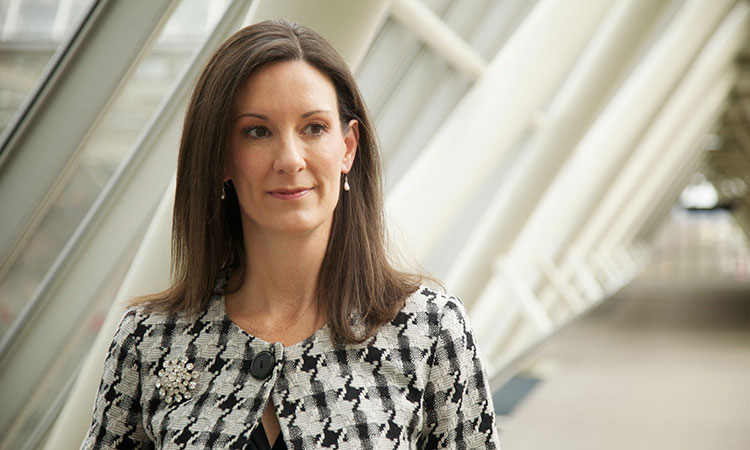