After graduating from Sartell High School in 1991, Alicia Peters was working as a waitress at the Sartell Golf Course and struggling to stay afloat as a first-year student at St. Cloud State University.

That’s when she happened to cross paths with Margy Retica Hughes, a longtime cornerstone of the physical education department at the College of Saint Benedict, and later the chair of the joint department at CSB and Saint John’s University.

“I was absolutely failing in my classes and working at the golf course waiting tables,” recalls Peters, a 1996 CSB graduate, who for the past decade has been an art pedagogy instructor at CSB+SJU. “One night, we were slammed and Margy was there sitting at the bar after playing a round of golf with her husband (Tom). She asked me what I was doing with my life and I told her I had no idea. College was hard and (waitressing) was looking pretty good to me with the types of tips I was getting.

“But she said ‘I watched the way you interact with people and I saw you do some amazing things during that rush just now. We need more women like you as leaders at Saint Ben’s.’ I told her I didn’t think I’d ever be able to get into school here. But she said she’d help me. And she wrote a letter and helped me with the financial aid process.

“If it wasn’t for her, I never would have been at Saint Ben’s or even finished college.”

Instead, Peters completed work on her art degree (BA at CSB), then eventually completed work on her BS degree in art education at St. Cloud State. That allowed her to pursue her goal of being an art instructor – first at the elementary level in the Rocori School District, then at her alma mater.

“It’s a funny story,” she said. “In high school, we were supposed to write a letter to ourselves to read however many years later. And when we came back for our five-year reunion, I opened mine. It said I’d be traveling and working as an art teacher. At the time, I had dropped out of the education program and was working at a framing shop in St. Augusta and as a merchandiser at Media Play (a now defunct music and video store in St. Cloud). But that letter reminded me of how much I loved teaching and it made me go back to school to pursue my passion.”

That passion has consistently shown through in her work, and it’s a big reason why Peters has been named the 2021-22 Minnesota Higher Education Art Educator of the Year by Art Educators of Minnesota, a professional nonprofit organization that promotes the work and addresses the concerns of art educators at all levels.

“I nominated Alicia (for the award) because since meeting her in about 2008, she has been an educator who has challenged me, supported me and inspired me,” Tiffany Erie, an art educator at Ben Franklin Elementary and Montessori at Franklin in Rochester, Minnesota, said via email.

Erie and Peters got to know one another when Peters was teaching at Rocori and Erie was teaching in the St. Cloud school district.

“She is always advocating for what is best for her students and she’s a fierce advocate for art educators.”

Peters was notified she had received the award this past fall. A presentation ceremony is expected to be held sometime this spring.

“It’s a huge honor,” she said. “It means a lot because I was selected by my peers. It lets me know I’m making a difference and having an impact that’s being noticed.”

But it’s an honor that might never have happened had Hughes not extended a helping hand to help lead Peters to CSB.

“Saint Ben’s has meant so much to me,” she said. “This place has changed my life as a student, as a leader and as a woman. It’s given me the confidence to feel like I can accomplish anything if I set my mind to it.”

Hughes – who in February will receive the Marie Berg Education Award in recognition for her contributions to women’s athletics as part of Minnesota’s celebration of National Girls and Women in Sports Day – is proud of all Peters has gone on to accomplish.

Not just in the classroom, but in the community where she is president of the Millstream Arts Festival in St. Joseph and has worked on behalf of a number of other causes.

That includes the Yes Network in St. Cloud which helps bring art experiences to children in 18 different neighborhoods.

“Somehow it just turned out that I was in the right place at the right time,” Hughes said. “And to watch her develop and explore her talents over the years has made me so happy.

“She’s gone on to do a lot of amazing things.”

Even decades later, Peters has not forgotten the impact of that conversation.

“There are moments when you may not be aware of the impact you are having on someone else’s life,” Peters said. “That’s something I’ve tried to remember as a teacher and I’ve tried to pass on to my students. You want to be really intentional about the conversations you have – what you’re sharing and the kind of influencing you’re doing.”

Peters has continued to write five-year letters to herself over the years, setting new goals and eyeing new frontiers to conquer.

“I was diagnosed with Parkinson’s three years ago and that’s made a lot of my goals present-day ones,” she said. “Things I might have put off for a few years, I’m trying to do now. One of my goals is pursuing my doctorate which I’m doing at Hamline (University in St. Paul).”

And through it all, her passion for sharing art with others has not diminished one bit.

“Why do we need art education,” she said. “It’s part of our humanity and who we are as people. It’s a part of what we leave behind for future generations. The majority of students I teach go on to be elementary educators and I try to stress the importance of art and thinking outside the box. We need that mindset to save the world.

“If we lose it, we’re doing a disservice to our communities.” 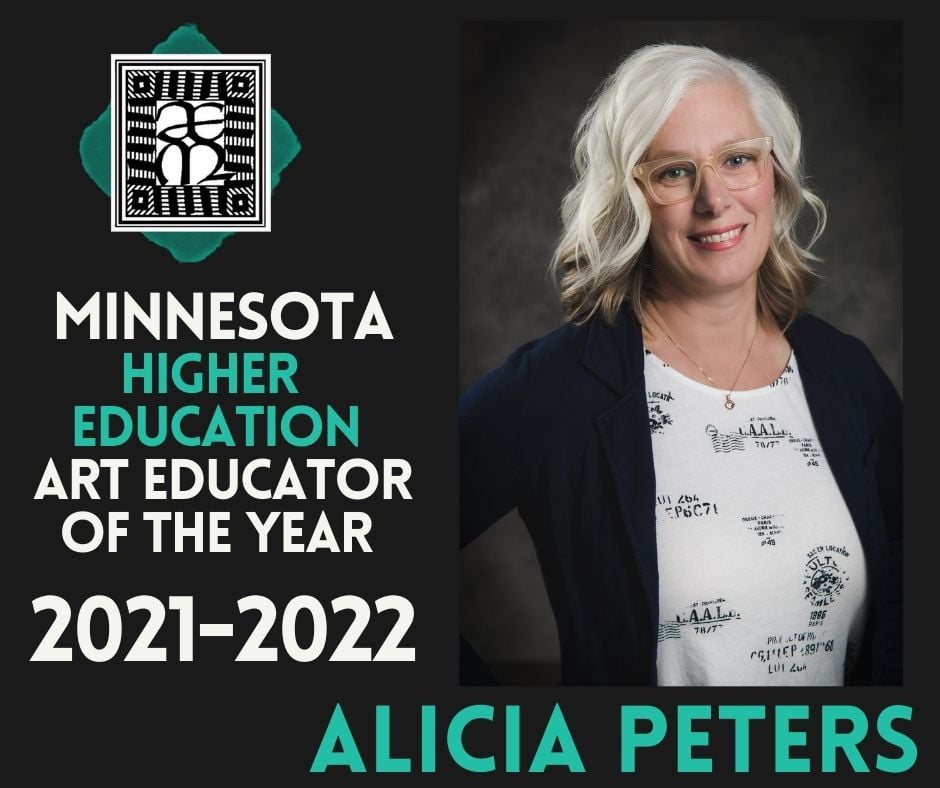