The Symphony Orchestra is one of CSB/SJU’s largest and most recognized performing ensembles. With 70 - 80 students involved, an incredible array of majors are represented; both music majors and non-majors are invited to play. This ensemble performs four to five concerts each year and tours regularly. The Orchestra meets weekly on Tuesdays and Thursdays from 1:05 p.m. - 2:25 p.m. and Wednesdays from 7:30 p.m. - 9:15 p.m. in A-135. Interested students may enroll in Orchestra by registering for MUSC 233 for 0 or 1 credit. 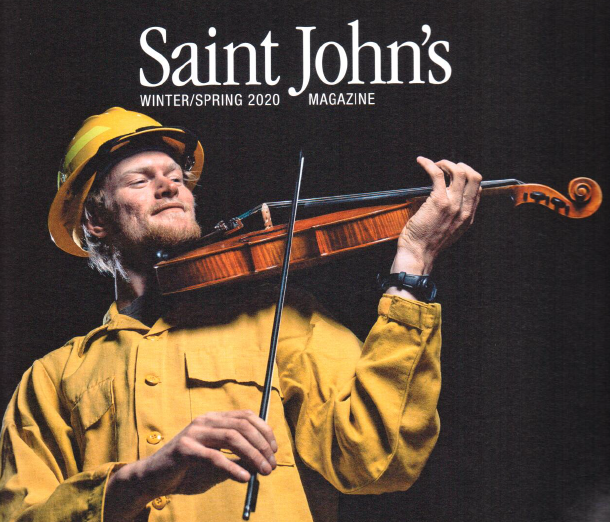 (Picture shown is from our SJU magazine featuring Carter and his passion for music and the outdoors.)

We are very proud of your outstanding work and dedication! 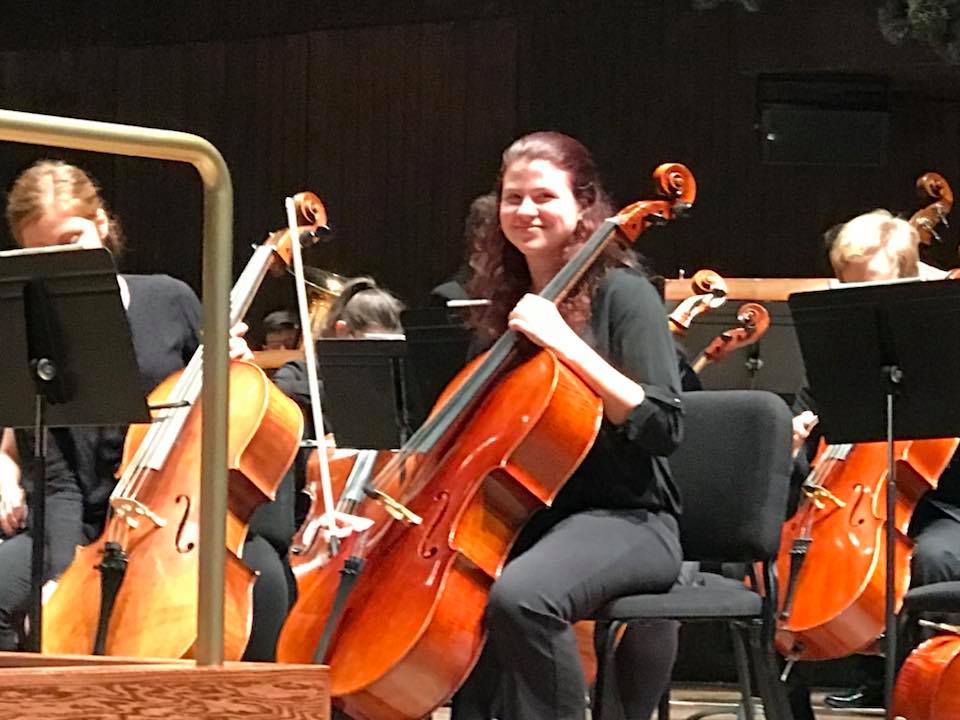 Congratulations to Emma Murphy, College of Saint Benedict class of ’21.  A French and Psychology major and a cellist in the CSB/SJU Orchestra.  She has been selected to be apart of Phi Beta Kappa; a well deserved nomination for her outstanding achievements! 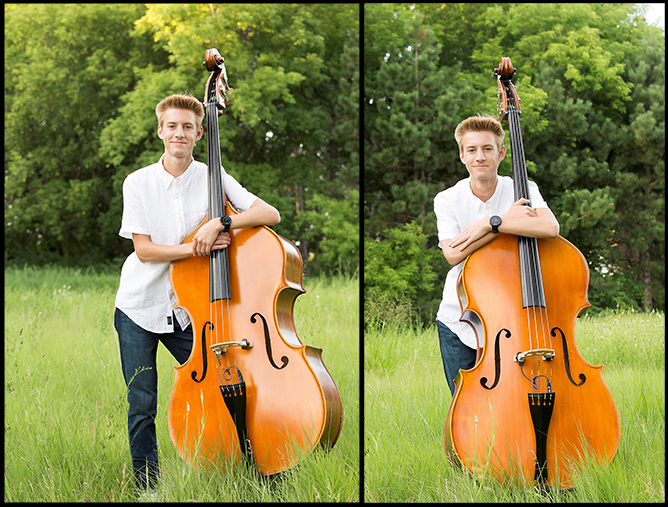 Maxwell Vogel, Saint John’s University Class of 2024.  Max is majoring in computer science and minoring in environmental studies.  He has been playing the bass for nine years.  Outside of orchestra, Max is a member of the Bonner leader program, and works as a Student Land Manager in the St. John’s Arboretum.  He runs on the St. John’s Cross Country team, and the Track and Field team. 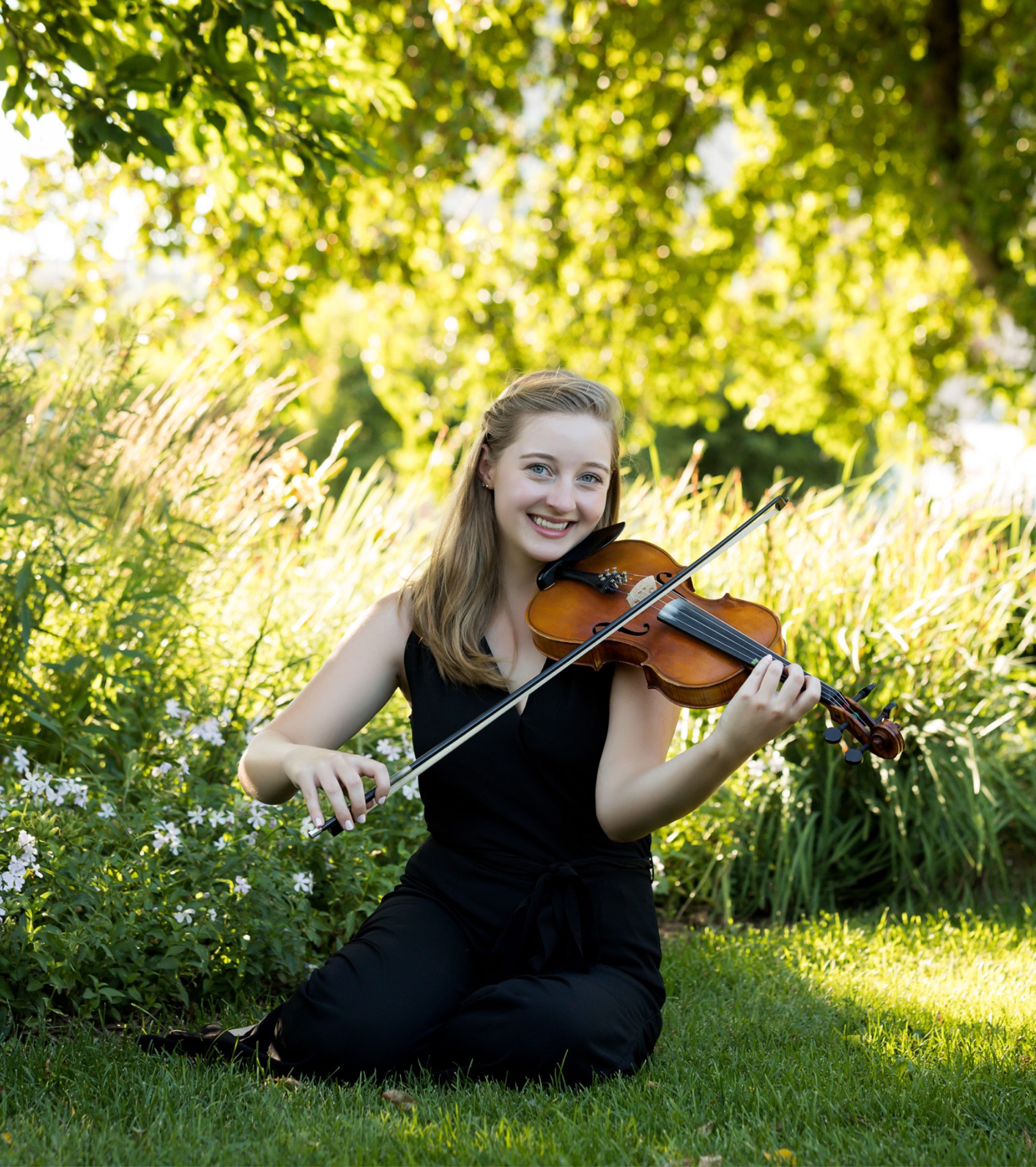 Lillian Brudwick, College of Saint Benedict class of 2023. Lillian is a political science and history majors. She has been playing the violin for nine years, and is also a member of CSB/SJU orchestra. Lillian is also a member of the Hynes Scholars program and works at Clemens Library.  She enjoys playing board games with her friends and hiking around campus.

Lauren Funke, College of Saint Benedict Class of 2024. Lauren is a physics major and is also very interested in musical performance. She has been playing the violin for thirteen years, and is now a member of the CSB/SJU orchestra! In addition to music, Lauren is also a member of the Bonner leader program, and she will be working at the Boys and Girls Club of Central MN in St. Joseph, MN this year. She enjoys the outdoors and is also an invested rock climber, and she is excited to spend time at the rock wall on the SJU campus. 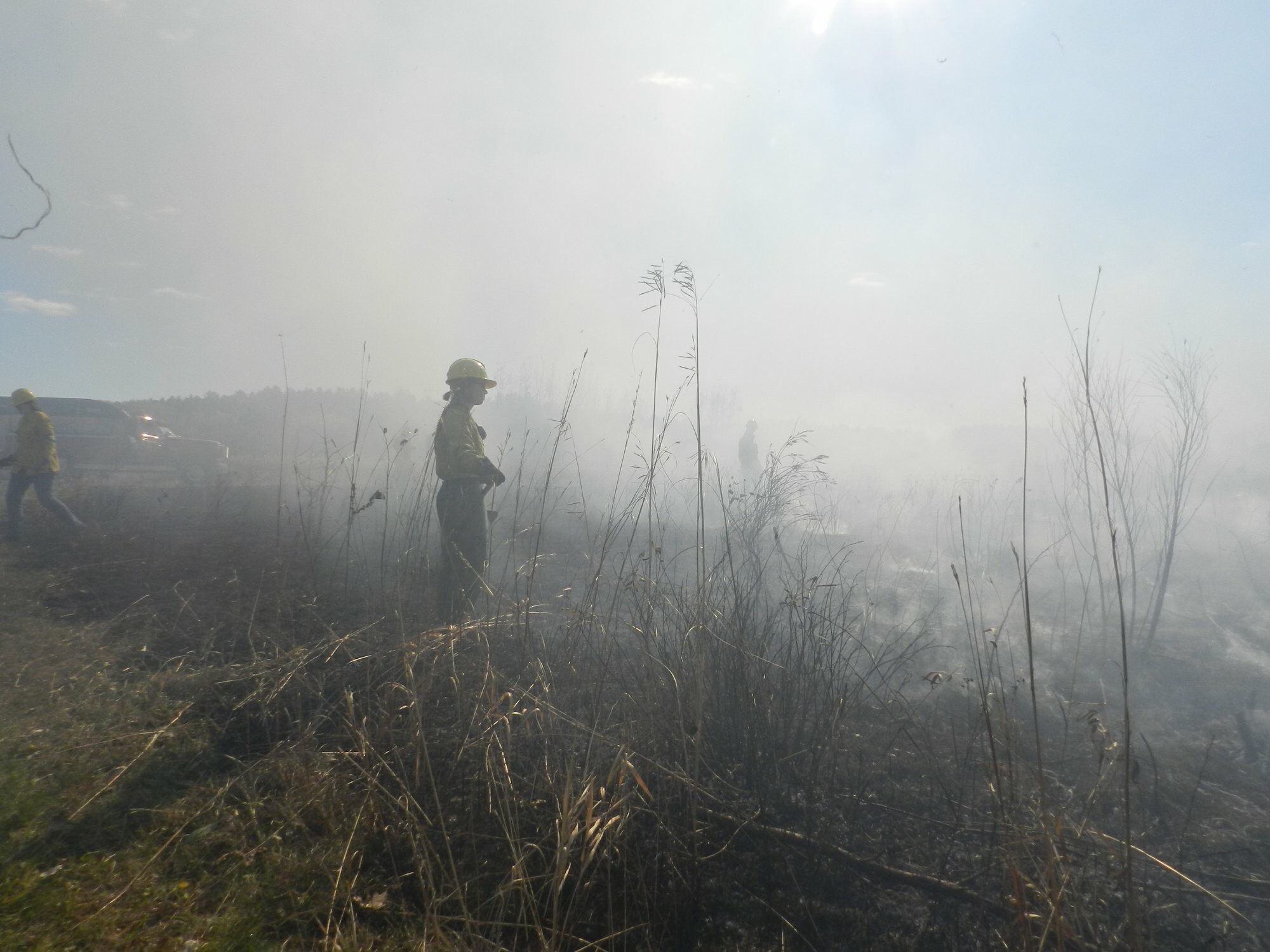 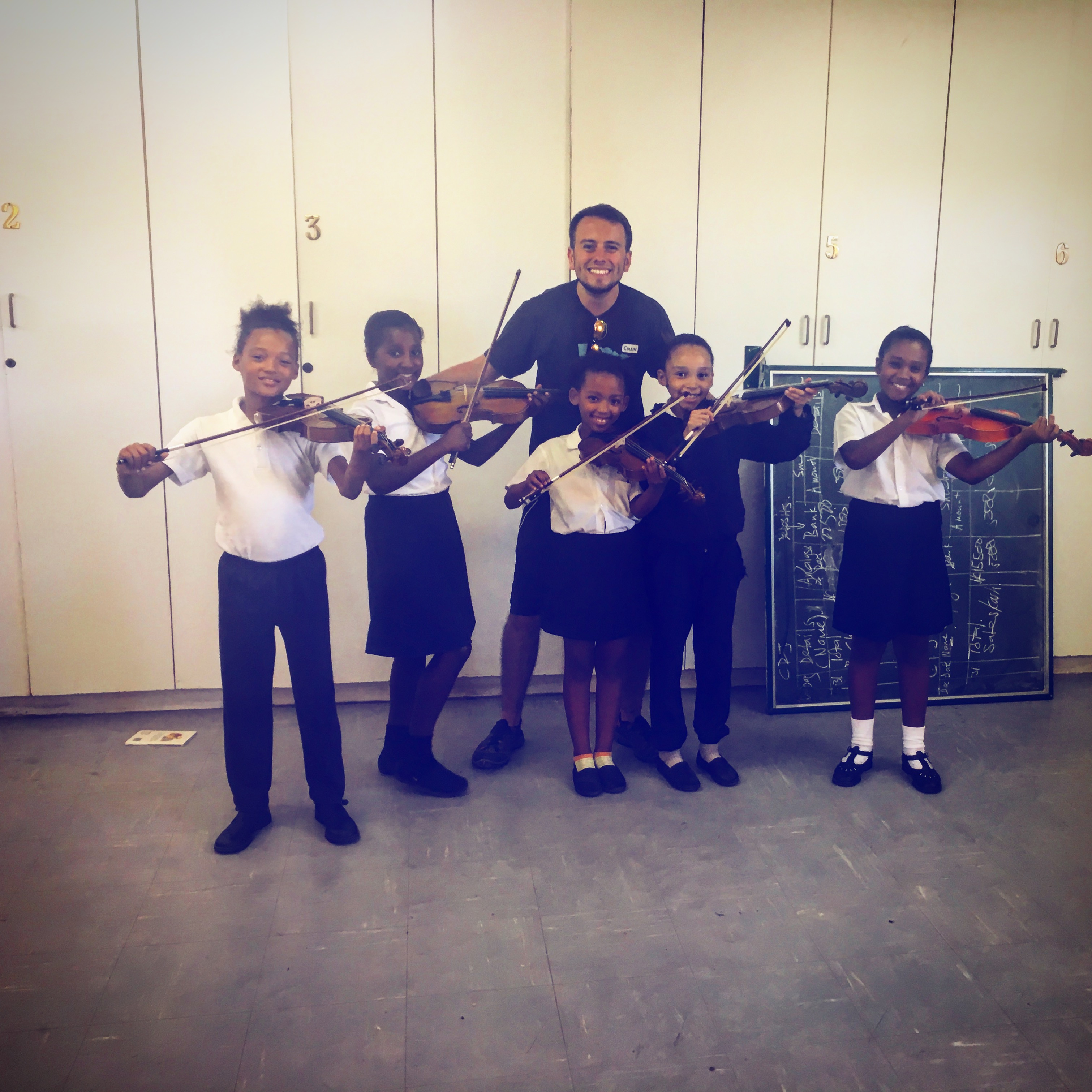 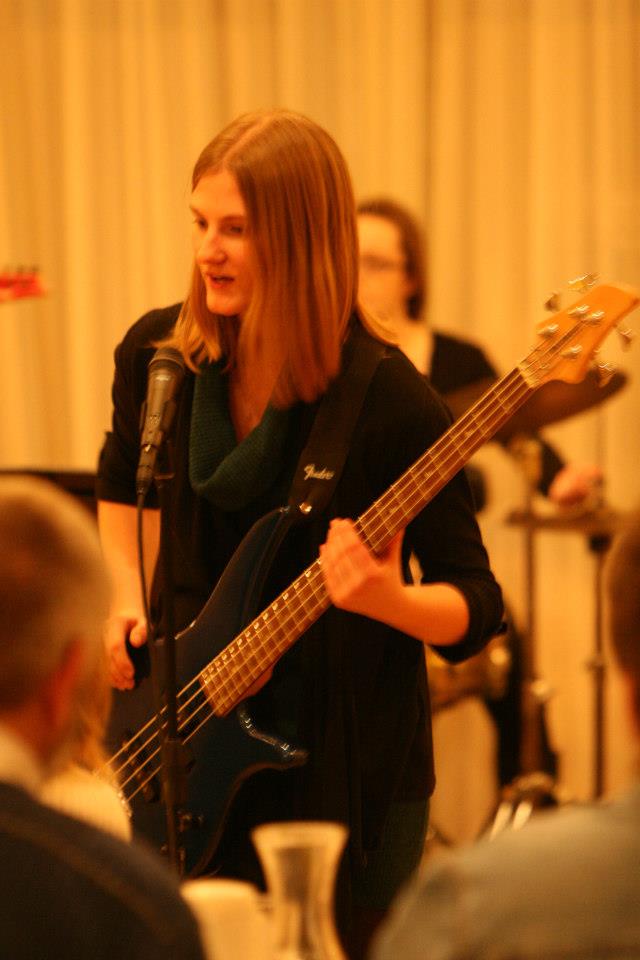 Catherine (CJ) Pettinger, College of Saint Benedict Class of 2017, is a biochemistry major and music minor. Although involved in many different volunteer and school activities, CJ has continued an active participation in a variety of ensembles, ranging from large ensembles Orchestra, Jazz, and Wind Ensemble to many different smaller groups. Upon graduation, she plans to volunteer with the Franciscan Community Volunteers for a year while applying to medical schools.

Tyler Bruinsma is a member of the class of 2017 and is an Integrated Health Science Major. He studied abroad in Chile during his junior year and is very interested in Spanish in addition to his other studies in the pre-medicine field. He is the principal horn of the CSB/SJU Wind Ensemble, Orchestra, Brass Choir, Brass Quintet, and Woodwind Quintet. He is the Past President of the Global Health Affairs Club and is an RA at Saint John’s. Following graduation, he will be working at Mayo Clinic in Rochester, MN as a Research Technologist while he applies for medical school.

Meg Anderson, College of Saint Benedict Class of 2017, is a Junior French Major with a Psychology minor. She has been playing the violin since she was five years old and has participated in Orchestra since the Seventh Grade. She is currently a member of the CSB/SJU Orchestra as well as a captain of the CSB club lacrosse and a member of the French Club Executive Board. She spent the fall semester of her Sophomore year studying abroad in Cannes, France, and hopes to return to France, to continue expanding her knowledge of the language and culture.

Rebecca Humbert, College of Saint Benedict Class of 2016, is a psychology major with a nutrition minor. After graduation, she will be attending St. Kate's to get her Masters in Occupational Therapy.

Anna Baumgartner, College of Saint Benedict Class of 2016, is a biology major and a German minor from Champlin, MN. She is very excited to be attending the University of Minnesota Medical School this fall! Anna had been playing for ten years and has loved being able to stay involved in music through symphony orchestra, lessons, and pit orchestra while pursuing other fields of study at CSB/SJU.

Paeton Larson, College of Saint Benedict Class of 2016, is from Rapid City, South Dakota. She is a biology major and psychology minor, as well as an honors student. Following graduation, Paeton will be attending University of Nebraska Medical Center in Omaha to receive her Masters of Science Physician Assistant Studies.

Emma Christensen, College of Saint Benedict Class of 2016, is from Blaine, MN.

CSB/SJU has been honored to be the host institution of the Minnesota Music Educators Association All-State Orchestra Festival: 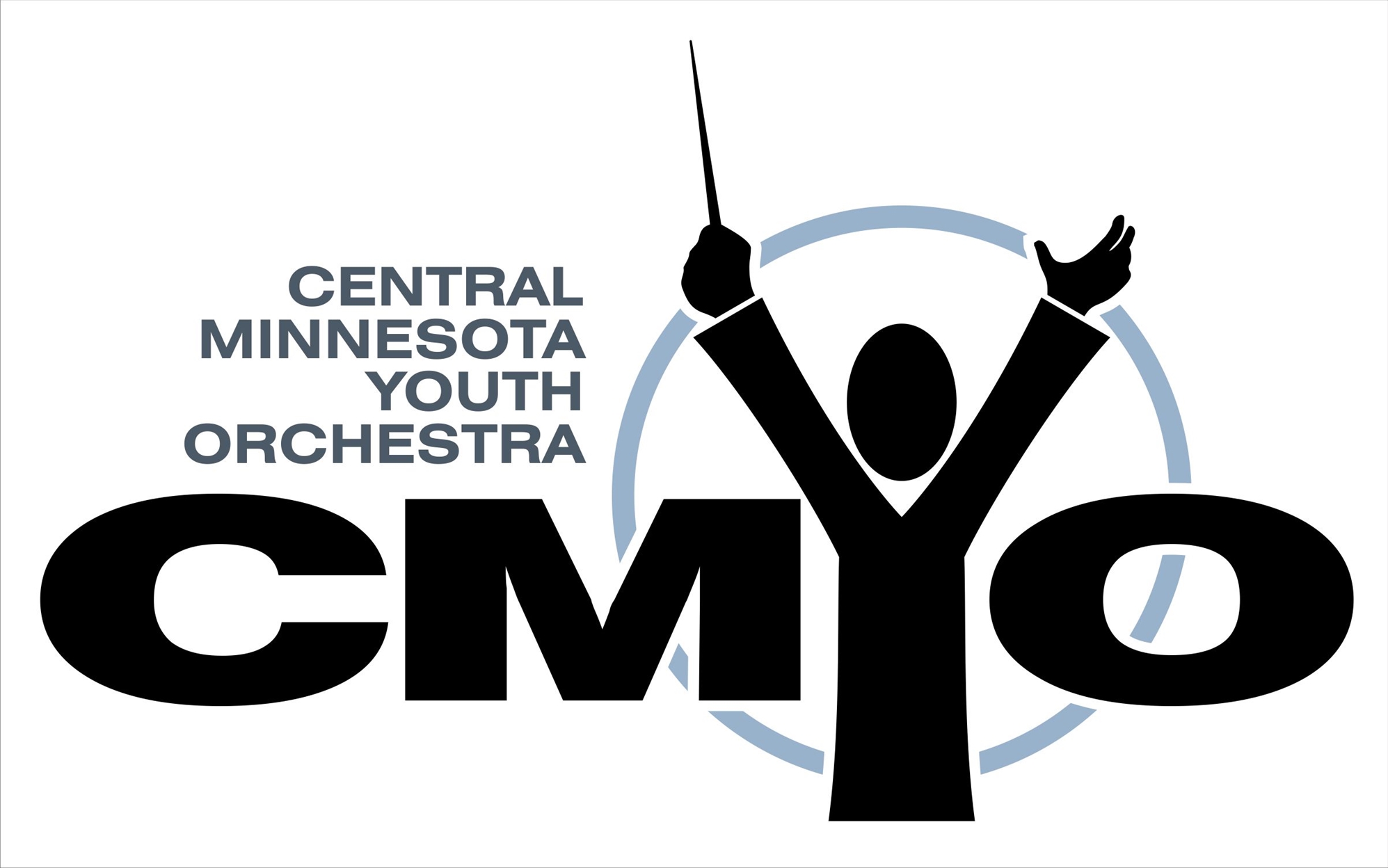 The CSB/SJU Symphony is a proud sponsor of "The Central Minnesota Youth Orchestra".