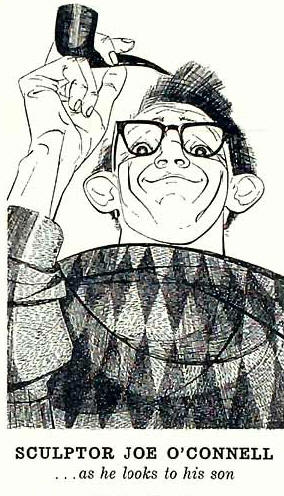 Joe O'Connell, creator of the metal sculpture "Our Lady Queen of Peace" at the link entrance to Regina Hall, has begun a semester as "artist-in-residence" in St. Benedict's art department. Besides teaching a sculpture course, O'Connell will work in the Fine Arts Center on another metal sculpture which will remain at the school.

A former instructor at St. John's University (1954-56) and at Sienna Heights Women's College in Adrian, Mich., O'Connell has also done a metal figure and crucifix for the St. Michael chapel in St. John's Abbey Church.

O'Connell lives with his wife, Jody, four children, Tommy, Lauren, Eric and Brian, a goose named Calpurnia and a dog named Charlie, in a frame house down the road opposite the entrance to SJU. Behind the house, past a pair of sheds and a rubbish burner with a face cut into the side, there is a small barn-like studio with peaked roof and high windows. Inside are stands holding white plaster models and limestone carvings, a wood stove and an array of tools.

Dressed in a plaid shirt, cut-off sweatshirt, ink-stained khakis and hunting boots, O'Connell leads friends upstairs to a corner loft as fascinating as the workroom below. With a pipe constantly in his mouth—even while talking— and glasses perched atop his head, O'Connell's face is a series of smile lines that crease each side of his mouth as he brings out photographs or a new etching for display.

O'Connell first became interested in sculpture after reading a passage about the love of tools in a book by Eric Gill, English sculptor and essayist. The idea appealed to him so much that, without training, he experimented with his first wood carving at 25. A year later he was commissioned to do an "Agony in the Garden" in wood, by a man who had seen an exhibit of his paintings in a Chicago theater. The next year he was asked to teach at St. John's.

O'Connell claims not to be satisfied with the pieces he finishes. "You can't ask an artist whether he likes something he's done," he said, "because the idea in his mind is always greater than the work actually turns out to be."

Though the sculptor is "wrapped up in his work'' he is also fond of good jazz, photography and fine movies.