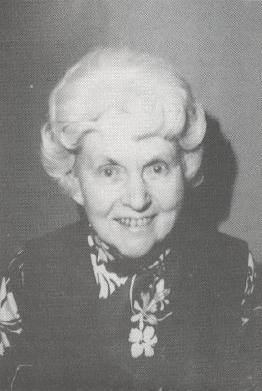 MAY THE ANGELS LEAD HER INTO PARADISE.

Mary was born in St. Croix Falls, WI, on December 15, 1898, the second of three children of Joseph and Mary (Marzolf) Gable. Two brothers preceded her in death. After attending public school in Marine On The St. Croix, she came to St. Benedict's Academy and entered the convent in her senior year, became a novice on July 10, 1916, made first vows on July 11, 1917, and celebrated her Golden Jubilee in 1967.

Sister Mariella began her lifelong ministry as English language and literature teacher in high schools in Bismarck, Melrose and St. Joseph. She received a B.A. in this field from the College of St. Benedict in 1924, an M.A. from the U. of M. in 1929, and a Ph.D. from Cornell University in 1934. She taught at CSB from 1928 to 1958 and from 1962 to 1973 when she retired as professor emeritus. From 1935 to 1958 she chaired the College's Division of English Language and Literature. The years from 1958 to 1962 were spent teaching at colleges in Oregon and Missouri.

Sister Mariella is also well known as a writer. She published a book of verse, BLIND MAN'S STICK, in 1938, and THIS IS CATHOLIC FICTION in 1948, edited three collections of short stories, and contributed verse, book reviews and essays to "Commonweal," "America," and other national publications. She wrote the script for the pageant on Benedictine history used for CSB freshman orientation for many years. She loved teaching Teilhard de Chardin and Dante's "Divine Comedy" and was still being asked to give courses on them in St. Cloud at age 80. She was elected to Phi Beta Kappa and other national honor societies and listed in many directories of eminent educators and writers including "Outstanding Educators of America in 1972" and the first edition of "The World's Who's Who of Women in Education."

Sister Mariella was faithful to these words of Jesus that she quoted to an alumnae group in 1975, "The gift you have received, give as a gift." She has used her gifts to spread His good news far and wide. We are confident God has received her into the fullness of His gifts of love and joy.