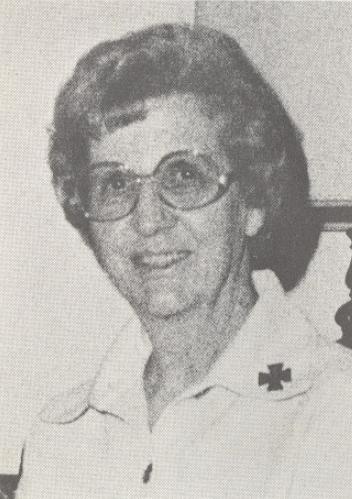 Sister Mary Grell died quietly at 11:30 p.m., April 9, 1981, at New Prague Convent, surrounded by her Sisters. In 1979, she was elected regional superior at Manchester Priory, New Hampshire. Cancer of the gallbladder was discovered at surgery there and she returned to St. Benedict's Convent in October,1980.

Born in Pierz, MN., she was the sixth of seven girls born to Mr. and Mrs. John Grell She entered St. Benedict's Convent in 1929 at age 17 and pronounced her perpetual vows in 1935.

During her 49 years of religious service Sister Mary was a teacher, administrator, scholar and researcher. Beginning in 1933 she taught biology at the College of St. Benedict for 30 years and continued in the cooperative program with St. John's University in 1970. She Received her B.S. degree in botany and chemistry room the College of St. Benedict, and her M.A. in biology from St. Louis University in 1937. She was awarded a doctorate in cytogenetics by Fordham University, N.Y., in 1945.

Sister Mary was President of the College of St. Benedict from 1963 to 1968. During her administration the Benedicta Arts Center was dedicated, the first lay board members were appointed, a budget system was established, and the early stages of the cooperative program with St. John's University were developed. An integration program in general education was also begun. She was Executive Secretary of St. Benedict's Alumnae Association for ten years and one of the first teachers at St. Benedict's to offer a credit course in genetics on Channel 2. She served as a member of community and college task, teams, boards, and committees all of her life.

She received seven grants for research in genetics, one of which was a Fulbright scholarship to study at the Max Planck Institute, Wilhelmshaven, Germany. She also traveled extensively under the Tri-College Great Issues Program, visiting biological research institutions, which specialized in genetics.

Sister Mary was a quiet, gentle woman. She was a dedicated teacher and scholar, who saw nature as a reflection of God's love, but her most outstanding characteristic was her great capacity to be a friend to so many, to listen and to love, to identify with the human condition. Her colleagues thought her a "great and gracious lady," and children loved the balloons and candy she stored in her desk drawer. Sisters who witnessed her last months remarked on her sensitivity and patience. When asked what to plan for her funeral, she said, "Just make it joyful and prayerful. I trust and hope there will be Sisters around who will pray and sing with me."

A Mass of Christian Burial was celebrated at St. Benedict's Convent Chapel on Monday, April 13. Burial was in the convent cemetery. We, her community, relatives, colleagues and friends rejoice.