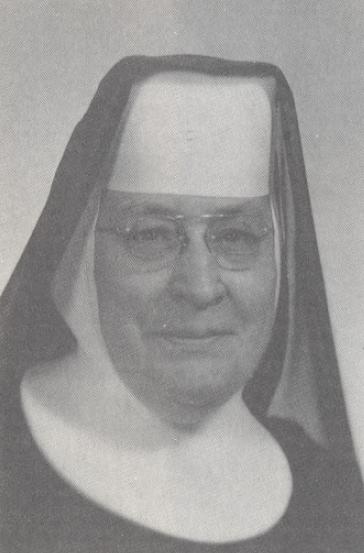 The life of Sister Inez Hilger, considered by many as one of the world's leading anthropologists, has come to its fulfillment in eternal glory. Sister Inez, 85, died quietly in her sleep May 18, 1977, during the early morning hours. When Sister Inez experienced a weak spell five days ago she received the Sacrament of the Sick. Her health was failing the next few days, but she still spoke to the night nurse attendant several hours before she died. Sister Inez was retired at St. Benedict's Convent since 1975.

Born in Roscoe, Minnesota, Sister Inez was the second oldest of the nine children born to Mr. and Mrs. Frederick Hilger. The Hilgers were the first settlers in Roscoe in 1889. Sister Inez entered St. Benedict's Convent in 1908 at age 17, pronounced her perpetual vows in 1914, and celebrated her diamond jubilee (60) of profession in 1971.

Sister Inez enjoyed a rich and fascinating career during her 64 years of active life as a Benedictine religious serving as teacher, administrator, scholar, author, lecturer, and researcher. It was only after 25 years of teaching on elementary, secondary and college levels that she embarked on her career in anthropology. She earned her B.A. degree at the University of Minnesota in American history and American literature and her M.A. from Catholic University of America, Washington, D.C., in 1925 in sociology and social work. When she matriculated at the Catholic University, she was the first woman student with full privileges. In 1936 she returned there and was awarded a doctorate in her major fields of sociology, anthropology and psychology.

While at the Catholic University Margaret Mead, world-renowned anthropologist and a close friend of Sister Inez, sparked her interest in the child life of various cultures. Her fieldwork began with comprehensive studies of 12 American Indian tribes. Then in 1946, she traveled to Chile to study the Araucanian Indians. Sister Inez' interest in the Indians did not remain on the intellectual level; she took a personal interest in bettering their lives.

Sister Inez received eight grants for research. She undertook her last project in 1965 at age 74 when she was asked by the National Geographic Society to study the vanishing culture of the Ainu people of Hokkaido, Japan. Sister Inez has authored 8 books and over 70 essays and articles during the course of her life. Three of her eight books were published by the Smithsonian Institution, Washington, D.C., as part of its research series in ethnology. She is a Research Associate of the Smithsonian. She was also awarded an honorary degree, Doctor of Humane Letters, by the College of St. Benedict in 1971 on the occasion of her diamond jubilee. The Sister M. Inez Hilger Room in the college library houses museum exhibits of her writing collections and artifacts.

Despite Sister Inez' extensive travels to and exploration of the cultures of more than 50 countries, she never lost appreciation for her Benedictine home and for community life. With her friendly and approachable personality, the sisters found Sister Inez an interesting conversationalist, one adept at entertaining with delightful anecdotes from her field experiences. We thank God for her example of dedication to God and humankind.

A Mass of Christian Burial was celebrated at St. Benedict's Convent Chapel at 4: 30 p.m., May 20, 1977. Burial was in the convent cemetery. We, her community, relatives, professional colleagues and many friends, rejoice that God has crowned Sister Inez' rich earthly life with a life of glory in His eternal kingdom. May she rest in peace!