Entrepreneur of the Year Awards

The SJU and CSB Entrepreneur of the Year Awards, sponsored by the McNeely Center for Entrepreneurship, recognize the achievements of a Johnnie and a Bennie who best exemplify the ideals of entrepreneurship by starting and successfully managing one or more businesses in a way that demonstrates notable entrepreneurial characteristics and achievements while practicing Benedictine values in the workplace and in their lives.

The CSB/SJU Social Entrepreneur of the Year Award recognizes the achievements and qualities of a Johnnie or Bennie who best exemplifies the ideals of social entrepreneurship by starting and successfully managing one or more ventures that enrich humanity or address a social issue in a way that demonstrates notable entrepreneurial characteristics and achievements while practicing Benedictine values in the workplace and in their lives.

Entrepreneur of the Year 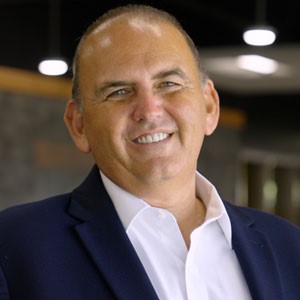 Pat Lynch has been involved with transportation and logistics throughout his career. After earning his degree in Management at SJU, he stumbled into the industry and served in two entry-level roles before co-founding Payne Lynch & Associates in 1996. What originally began with three tables, one computer and big dreams evolved over the course of a decade into one of the leading flatbed/specialized transportation brokerage companies in the nation. In 2006, Payne Lynch was acquired by a Fortune 500 leader in the industry.

After sitting out a non-compete, Pat reentered the industry in 2011 as the co-founder and president of Granite Logistics. Granite Logistics is a third party logistics business with offices in Sartell and Minneapolis with specialty in the big, wide and heavy haul markets. With a talented team, Granite Logistics has seen solid and consistent growth. In 2022, the firm will arrange for the movement of over 70,000 truckloads of freight and generate over $250 million in gross billings. From 2015-2020, Granite Logistics consistently appeared six straight times (including three Top 10s) on the Minneapolis/St. Paul Business Journal’s Fast 50 list of fastest growing private businesses.

In addition to his business ventures, Pat has been actively involved in the Central Minnesota community. He has served two terms on the Sartell City Council, and served on the boards of Junior Achievement, Catholic Charities, CentraCare, and Plaza Park Bank.