About the Diekmann Center 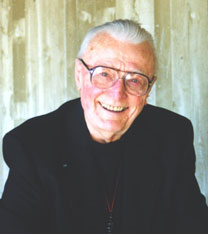 The Godfrey Diekmann, OSB Center for Patristics and Liturgical Studies was created to honor the life and work of Godfrey Diekmann, OSB (1908-2002), one of the 46 theologians chosen from around the world to prepare the schema on liturgy during Vatican II (1962-1965). A lifetime Minnesota resident, Father Diekmann entered Saint John's Abbey at the age of 17 in 1929. He taught theology at Saint John's University for 65 years before retiring in 1998.

He taught theology at Saint John's University for 65 years before retiring in 1998.  His contributions to the church and to the University have been exceptional. "With his immense scholarship and vision, his ample faith and generous heart, Father Godfrey has put Collegeville on the international map and made Saint John's synonymous with serious study of patristics and liturgy - conducted always in a faith-filled, prayerful and deeply personal way," stated Saint John's President, Br. Dietrich Reinhart, OSB, at the inauguration of the Diekmann Center in March 1997.

The Diekmann Center seeks to deepen contemporary understanding of the early Christian theologians of the first through seventh centuries and to promote the liturgical renewal called for by the Second Vatican Council. This is done through research and educational endeavors including a public lecture series and seminars for students, scholars and pastoral ministers. The Diekmann Center promotes theological learning that engages both the mind and the heart, bearing witness that the study of theology must be steeped in prayer and reflection within a community of learners.