What is Marijuana?
Effects of Marijuana
Risks

Marijuana is a green, brown, or gray mixture of dried, shredded leaves, stems, seeds, and flowers of the hemp plant (cannabis sativa). You may hear marijuana called by street names such as pot, herb, weed, grass, boom, Mary Jane, gangster, or chronic. There are more than 200 slang terms for marijuana. All forms of marijuana change how the brain works. They all contain THC (delta‐9‐ tetrahydrocannabinol), the main active chemical in marijuana. They also contain more than 400 other chemicals. People smoke, chew, or eat marijuana for its hallucinogenic and intoxicating effect. The strength of marijuana's effects on the user depends on the strength or potency of the THC it contains.

It is difficult to fully understand what the effects of marijuana might be because so many changes occur with use and there are even overlapping effects that involve different reactions in different body systems. The body systems are reacting to the THC, which triggers most of the mood and mind changes associated with the drug. THC is absorbed by fatty tissues in various organs.

Most effects from changes in perception to feelings of relaxation and euphoria usually peak within an hour and disappear altogether in 2‐3 hours. Other effects may last longer. Since products from THC breakdown can linger in the body for days or weeks after use, hazardous activities or occupations can be risky.

Negative effects of marijuana use can include confusion, acute panic reactions, anxiety attacks, fear, a sense of helplessness, and loss of self‐control. Chronic marijuana users may develop amotivational syndrome characterized by passivity, decreased motivation, and preoccupation with taking drugs. Individuals who regularly use the drug may experience the same problems as tobacco smokers including cough, phlegm, chronic bronchitis, and frequent chest colds. In addition, because marijuana contains toxins and carcinogens marijuana smokers increase their risk of cancer of the head, neck, lungs, and respiratory tract. Like alcohol intoxication, marijuana intoxication impairs judgment, comprehension, memory, speech, problem‐solving ability, reaction time, and driving skills. The effects of long‐term marijuana use on the intellect have not been established.

Risks of use depend on where you are, who you are with, and what you are doing. Consider the following:

Marijuana can make it harder to function in school‐, work‐, or job‐related activities by causing

Since marijuana cultivation is illegal and THC levels are not standardized, you will never really know what you are getting. You also will not know what pesticides and other chemicals could have been used in growing it. Marijuana poses potentially serious risks to children, pregnant women, and those with underlying emotional problems.

The amount of THC in marijuana has increased over the past few decades. Greater THC levels may  mean an increased risk of becoming addicted if exposed regularly in high doses. 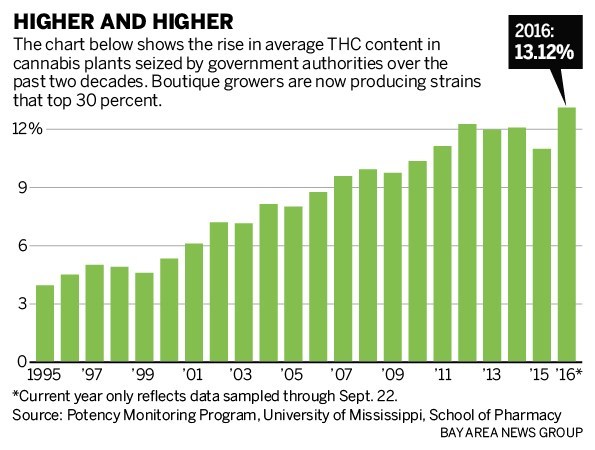 College GPA and Marijuana Use