In search of Central Minnesota entrepreneurs 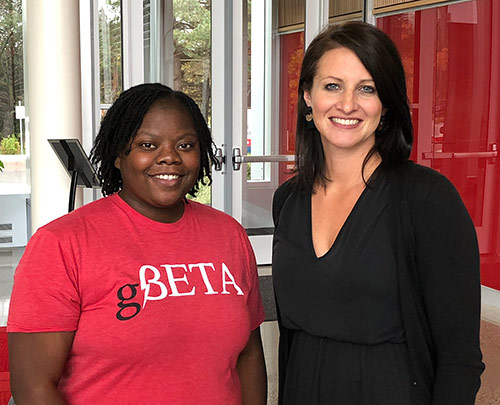 “I am the director of the new gBETA program in greater Minnesota and St. Cloud,” said Precious Drew. “And with that, it’s really on me to build the mentor teams, build the investor relationships and build the cohorts of entrepreneurs.”

There’s a lot to unpack in that statement, so you can be forgiven for feeling like it came at you quickly. It’s all come at Drew pretty quickly as well.

It wasn’t long ago (May 2018, in fact) that she was graduating from the College of Saint Benedict (CSB). Now she’s leading the development and implementation for this local chapter of a nationally ranked entrepreneurial pre-accelerator.

Let’s back up a bit to see how we arrived at this spot. Then we’ll get into how you can help.

How did Precious Drew get here?

“The summer after graduation I started a nine-month fellowship as a Finnovation Fellow,” said Drew. During her fellowship she worked on the startup she began as an Entrepreneur Scholar in the Donald McNeely Center for Entrepreneurship of the College of Saint Benedict and Saint John’s University (SJU).

“Then, this past summer, I took a step in a different direction to work in government again, which was something I had done for the four summers throughout college. I worked for the City of Minneapolis with our Urban Scholars program. And while I was there, Professor Paul Marsnik reached out to me with this opportunity.”

How did gBETA get here?

Shannon Verly Wiger is a 2004 graduate of the College of Saint Benedict. She is the Vice President of Spring Hill Capital and the Director of Business Development at the law firm of Moss & Barnett, and lives in the St. Cloud area.

“Through my work with emerging companies throughout the midwest, I have the opportunity to travel to a lot of different cities,” said Wiger. “And, without fail, communities that are truly thriving (and communities that are places where people want to live) are focused on cultivating an ecosystem that is a magnet for entrepreneurs, investors, creativity and talent.

“Those communities have an energy that is contagious, and they understand how to attract, elevate, retain and empower their young leaders and entrepreneurs. I’ve seen how powerful the ripple effect can be on nourishing a regional economy. I wanted more of that energy for my own community here in St. Cloud, and I knew we needed a few local champions to lead the charge.”

She began working with her friends and clients Rob and Ryan Weber at Great North Labs (where Wiger serves as an advisor) on launching an accelerator in St. Cloud to create a consistent hub for talent, entrepreneurs, investors and community partners. Together they settled on gener8tor, a nationally ranked accelerator with world-class partnerships and a proven track record of success in communities similar to Central Minnesota.

For help finding a local director to operate the gBETA and gALPHA programs that gener8tor will put in place, Wiger reached out to Paul Marsnik, a global business leadership professor at CSB/SJU. “Of course, as a proud Bennie alumna, I wanted a Bennie or Johnnie to lead this,” admitted Wiger. “I was confident in the abilities of CSB/SJU graduates, and I also knew that a direct connection between this accelerator and CSB/SJU would be beneficial for the faculty, students and alums of both institutions.”

After a competitive interview process, Drew’s name rose to the top and she was offered the director position. “She is exactly what I expected,” confirmed Wiger. “Polished, creative and brilliant. We are so fortunate to have Precious leading this important initiative.”

“gBETA is an accelerator program for early-stage startup companies,” explained Drew. “We give them access to mentors, individualized work plans, lunch-and-learn sessions and access to a community of different business leaders and entrepreneurs around the country.”

It is a highly selective seven-week program for a small cohort of companies. “We only select five companies per cohort,” said Drew. “So, yes, it’s pretty selective.”

The companies that are selected are at varying stages of the startup process. “We see people at the idea stage who have done their research and they’re ready to take the leap and actually do something,” said Drew. “And we’ll also see businesses that have been around for a few years but really need that extra push to the next level.”

During the seven-week lifecycle of a gBETA cohort, entrepreneurs will meet twice each week, one-on-one with Drew, to analyze and evaluate their business plan. gBETA will hold frequent lunch-and-learn sessions for the cohort that will also be open to the community. And each week, gBETA will bring together five different mentors in a “mentor swarm” for cohort companies. “That’s where organic mentorship opportunities come and our cohorts really connect with specific mentors and build long-term relationships,” said Drew.

How does this impact you?

Drew is currently recruiting her first gBETA cohort for St. Cloud and Greater Minnesota. The application deadline for interested entrepreneurs and startup companies is Friday, Oct. 18.

“When we’re selecting a cohort,” said Drew, “we’re looking at your idea, we’re looking at who and what you have around you, and we’re looking to see if there are real ways that we can benefit your company. We want to see companies with the drive and the passion to succeed. What have you done up to this point and what are you doing now to show you’re ready for an accelerator and you can keep up with the pace of the work that comes with it?”

Given her experiences with CSB, SJU and the McNeely Center, Drew is confident that there are Bennie and Johnnie alums in the area who fit that bill.

“Applications are open until Oct. 18 at gbetastartups.com,” confirmed Drew. “But if you’re on the edge about it or you’re really not sure and you just want to toss the idea around, I have office hours where anyone can come meet with me one-on-one and sit down for a quick chat over a nice cup of coffee. Let’s talk and find out how I can benefit you and this community. Even if people don’t get accepted to the program, I want to be a touch point and a resource to connect entrepreneurs with what they need.”