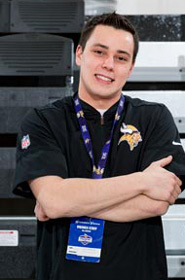 Thanks to connections he made during his internship with the Minnesota Vikings at their summer-2017 training camp, DeMorett secured a position volunteering at Super Bowl LII in February. As a volunteer, he helped lead the football operations exhibit at the Super Bowl Experience (SBX). It was there that DeMorett networked with essential contacts, one of whom eventually became his current boss – the Manager of Game Statistics Operations for the league.

As a student at SJU and the College of Saint Benedict (CSB), DeMorett majored in economics and double minored in global business leadership and exercise science & sport studies. But he also built a resume that includes student employment in the SJU Athletic Media Relations Office, performing tasks that included conducting statistical research, working on stat crews for Johnnie sports, and sports writing. That was key in helping him land a position in the NFL league office just a month after graduation.

In his role this season, DeMorett uses his CSB/SJU background in business and sports studies every day. His responsibilities range from ensuring accuracy of statistics during gameday to weekly statistic corrections. Additionally, he is working with a high-profile player health and safety project “tracking helmet contacts for every player on every play during NFL games,” he said.

He is also currently helping with the audit of player participation for each game and a seasonal project that combines play-by-play footage and final game statistics from all levels of college football for NFL teams’ scouting departments.

DeMorett’s position with the NFL is temporary and will end in January 2019. At that point, he plans to move back to Minnesota and hopefully work for a sports team more locally based, preferably with the Vikings, Twins or Timberwolves. While his experience working for the NFL has been life-changing, DeMorett said, “New York is a fun city to live in, but Minnesota is my home.”