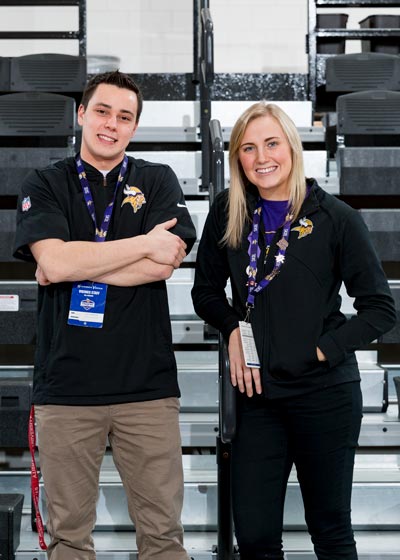 Not every internship at the College of Saint Benedict or Saint John’s University leads to an opportunity to work at the Super Bowl or the NFL Experience.

But for two students, internships did exactly that.

Megan Schroeder, a CSB junior from Lake Crystal, Minnesota, and Mason DeMorett, an SJU senior who graduated from Caledonia (Minnesota) High School and now lives in Waseca, Minnesota, parlayed internships working at the Minnesota Vikings’ training camp into opportunities to work at the game (Schroeder) or the NFL Experience (DeMorett).

“It will be a really good day in Minnesota,” said Schroeder of the Feb. 4 game, matching the New England Patriots and the Philadelphia Eagles. She will work in guest services for the game.

“The Super Bowl is the biggest event of the year in sports. Having it in our state is going to be fun,” said DeMorett, who will work four shifts at the NFL Experience Jan. 27-Feb. 3 at the Minneapolis Convention Center.

Both students served internships during the Vikings’ final training camp in Mankato.

“(The internship) came out of the blue,” Schroeder said. “I was studying abroad last summer for the Spain May term. I knew I was going to be gone in May and June, so I wanted to find an internship that would let me go abroad, so this opportunity (at training camp) was perfect for that because it didn’t conflict with Spain at all.

“I was considered a marketing intern (at the camp),” Schroeder said. “I really didn’t know what I was getting myself into when I started it.”

She helped set up activities during the practice sessions that children could participate in. Schroeder also helped serve fans who had rented hospitality and VIP tents.

One of the people Schroeder spoke to at camp was Jessica Joyce, who serves as the Vikings’ guest services manager. Through Schroeder’s connection with Joyce, she was able to work guest services at U.S. Bank Stadium during Vikings’ game days, working with the team’s app.

“I’m considered a ‘Purple Person.’ When people come into the stadium on game days, I help them if they have ticket problems,” Schroeder said. “You can watch replays on the app. You can order food from your seat. You can get directions to your seat, because it is a huge stadium,” Schroeder said. “There’s a part of the app where you can ask it a question.”

For Schroeder, that continued a project she did for her global business leadership class during spring semester 2017 on the Vikings’ app.

DeMorett used a slightly different tactic to intern at the training camp in team operations.

“The manager of team operations (Paul Martin) was one of my cousin’s best friends from high school. The two of us have been going to training camp since 2007,” DeMorett said. “I always told (Martin) that I wanted to work in the NFL, and I emailed him last year and said, ‘Do you have any advice for me?’

“He told me to send him some stuff, and I will definitely go over it. I got an interview, went down to Eden Prairie (where the Vikings’ headquarters are located), did the interview and got the call.”

As a team operations intern, DeMorett did “a lot of logistical stuff” in Mankato – moving in players’ beds, TVs, and refrigerators. Interns also manned the front desk at Minnesota State’s Julia Sears dorm, where the players’ stayed, and meal check-ins.

The hardest part for DeMorett was that he had to act as a team employee and not as a fan.

“That was one of the hardest things for me to do at camp because I’ve been such a big fan my whole life,” said DeMorett, who ate dinner with cornerback Terence Newman, chatted with quarterback Case Keenum and rode an elevator with wide receiver Stefon Diggs. “You still had those cool kind of fan moments, but you had to do it professionally.”

The Vikings then sent out an email looking for volunteers to work the NFL Experience. The event is an interactive theme park that includes games, youth football clinics, a merchandise shop and autograph sessions with NFL players.

“That will be a pretty amazing experience, and a good résumé booster for what I’m trying to get into,” said DeMorett, who hopes to someday work for an NFL team.

Both Schroeder and DeMorett appreciated what CSB and SJU has done for them.

“Saint Ben’s and the global business leadership department has done a great job of trying to individually set us up for success,” Schroeder said. “They try to get us different experiences that get us our foot in the door, and try to be different than everyone else.”

“I spoke to Ryan Monnens (the Vikings’ director of pro scouting and an SJU graduate) when I was at training camp. I introduced myself, and said I was a Johnnie. He’s a great guy, and he gave me some great advice.