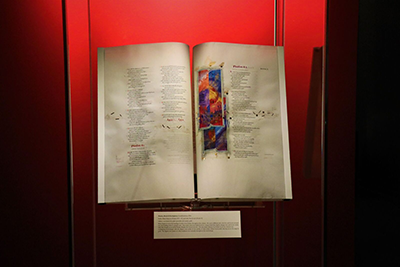 Walking into the new gallery for the Saint John’s Bible is an experience in itself. The large wooden doors lead into a room filled with glass cases containing folios from seven different volumes displaying the illuminations in a way that can keep a person interested throughout.

The Saint John’s Bible Gallery, which officially opened on October 6 2017, is a place to acknowledge the work that Donald Jackson and his team spent years creating. It comes at an exciting time in which the gallery is part of a newly renovated Alcuin Library and connects to a new addition, the Reinhart Learning Commons.

The gallery features background information about the Bible such as the team that created it and the way in which it was constructed from the process of planning the steps to the specific materials used. A full touch-screen electronic version of the Bible is available in the gallery as well, which gives guests the opportunity to see the illuminations in more detail.

The Bible’s illuminations incorporate parts of the school’s campus and beliefs. Currently in the gallery is a page called Life in Community an image that depicts unity and fellowship of Christianity; two important aspects of Saint John’s University. Amongst the faithful Christians, we see that the Stella Maris Chapel and the Saint John’s Abbey were added as symbols of where our community meets, connects, and prays with one another.

Different works of the Bible will be changed throughout the year to create different themed exhibitions as a way to continually show the dimensions of the work.

Bringing The Saint John’s Bible home to Collegeville, Minnesota is an opportunity for students to learn outside of the classroom about the history that leaders of their schools community and leaders in the field of calligraphy are making. The programming that will be incorporated into the schools events surrounding the multiple new additions will create more opportunity for millennials to learn about their faith in a way that connects to their school as well.