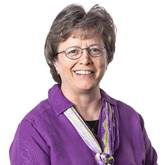 Saint John’s School of Theology and Seminary (SOT/Sem) alumnae Amie Schumacher is a leading proponent and educator within the Adverse Childhood Experience network. Recently named a 2019 Bush Fellowship recipient, she has been a leader of this movement locally and across the state for several years. Her own experiences during childhood and her program of study at the SOT/Sem were the catalysts that brought these ideas to her attention, and she was kind enough to tell me her story about how she found her way to the path she follows today.

The planting of a seed

Amie’s interest in the School of Theology and Seminary began while working at University of Iowa in the early 2000’s as a psychometrist, performing diagnostic evaluations focusing on neurological, psychiatric and forensic issues, and learning to differentiate between organic mental health problems and neurological issues. During her time at the University of Iowa, Amie had also been discerning religious life, and increasingly felt that she was called to something more.

Prior to her employment at the University of Iowa, Amie had started a Master’s in Counseling program in Texas in 1992. She was in her 2nd year of the program when the memories and pain of her past personal traumas, combined with a decade of alcoholic drinking, came to a head. In the process of learning to help others heal from trauma, Amie’s own issues were triggered and emerged full force, resulting in her resignation from the Counseling program. Her coping strategies of denial, minimization and numbing through alcohol no longer worked. After a period of nearly 10 years of being away from the church and feeling anger towards God largely due to her childhood traumas, Amie finally hit bottom, sought help and began her road to recovery.

Thankfully, her extended family in Ohio understood what was happening, and when Amie decided she needed help, they took her in, brought her to AA, and helped her find her way back. She is indescribably grateful for those who helped in her healing process. In 1994, Amie attained sobriety and began feeling a call to come back to God. It was in the course of a Lenten retreat where Amie experienced God’s love, mercy, and grace, enabling her to come back to the Catholic Church. She completed her Master’s in Counseling in Ohio and gradually became more involved with her faith during that time. Eventually, she was attracted to the University of Iowa because of the neuro-psychology research they were conducting, of which she ultimately became a part.

While at the University of Iowa, she began observing hospital chaplains and found herself very interested in the type of work they were doing. Amie explored the requirements for a chaplaincy and learned that one necessary item was a Master of Divinity. She looked at schools in Texas, but had also already heard of Saint John’s University. Taking a few days away from her job, she came to visit the School of Theology and Seminary. Upon arriving in Collegeville, she fell in love with this place. After her visit, Amie determined that Saint John’s was the place she wanted to pursue her Divinity degree, and she resigned her position at the University of Iowa with the intention of doing just that.

As life will have it, however, both of her parents fell ill simultaneously and needed care. Because of the decisions that Amie had already made, she was able to move back to Texas and provide the care that her parents required. Fortunately, she also discovered a Clinical Pastoral Education program near her parent’s farm and was able to complete that program in Texas while caring for her parents – all in preparation for her enrollment at the School of Theology in Summer of 2010.

Growing in the field

As expected, Amie found a challenging academic environment in her Master’s program. What she did not expect, and discovered that she needed, was the focus on sharing and community that she discovered within the School. This type of focus was difficult for Amie at the outset, as her normal coping strategies learned from childhood were to be a loner and to not rely on others. Coming to the SOT/Sem and encountering the hospitality and community that is so much a part of this Benedictine culture was an entirely different approach and one that Amie eventually embraced. While her CPE experience prior to coming to Saint John’s helped prepare her for life within the School, it was her immersion into the academics and community life here that brought her to a greater awareness of God and the Church, as well as how to understand the Bible and Scripture at a much deeper level.

During the pursuit of her graduate degree, Amie’s awareness of abuse and the impacts of trauma began to occupy more of her thoughts. Through her own trauma as a child, combined with the academic study she was engaged in, Amie discovered a strong interest in understanding the integration of trauma theory and theology. The conjunction of learning how to be a part of community, unpacking her own past traumas, and a new understanding of theology instilled in her a desire to apply her knowledge to help others with similar life experiences.

In 2011 and while still engaged in the Divinity program with the SOT/Sem, Amie began working part-time as a chaplain with the St. Cloud Hospital. Through her work there, she learned about the Adverse Childhood Experiences Study (ACE Study), a research study launched in the early 1990’s by Kaiser Permanente in conjunction with the Centers for Disease Control and Prevention. The study has demonstrated a causal relationship between adverse childhood experiences (ACEs - aka childhood trauma) and significant health and social problems across the lifespan. Upon first hearing about this study, Amie immediately felt this was something all chaplains needed to know more about. She created a presentation and shared it with her colleagues and supervisor at the hospital, leaving them stunned but fully aware that this information should be shared further. Amie’s supervisor recognized the impact the study could have on trauma recovery and health, and requested she create an additional presentation to show to hospital administrators and clinical care team leaders at the St. Cloud Hospital. Again, her audience perceived the relevance of this information and began to integrate these concepts into the hospital’s strategic plan.

The presentations Amie has created are designed to give insight into the research on this topic and what our faith communities can do. She acquired additional certification through an organization called ACE Interface, which has created an ACE curriculum giving communities the same tools and understanding that professionals have on Early Childhood Trauma, enabling them to not only identify and understand the root causes of many societal issues, but to create individual and community plans for addressing those concerns. Amie’s approach additionally incorporates pastoral care that is trauma-informed, which resonates strongly with every chaplains’ emphasis on the inherent dignity and value of each person.

Brightening the world around

The awareness of the ACE trauma recovery concept has expanded not only across the nation but internationally as well. As recently as January 2019, a public television series entitled Whole People was aired locally and is specifically related to Adverse Childhood Experiences (ACEs). This program is a five-part series spotlighting the impact of ACEs through personal and community stories. It explores the long-term costs to personal well-being and our society. While much work needs to be done, there are

many innovative developments to prevent and treat ACEs. Amie Schumacher is featured in the second of this five-episode series, which we encourage you to view via the TPT website (www.tpt.org/whole-people).

Amie completed her Master of Divinity program in 2015 and continues to present information regarding the Adverse Childhood Experiences Study to organizations and people in the community. Because of the material Amie was able to share with administrators, the St. Cloud Hospital was able to secure funding to employ a full-time ACE Coordinator. Additionally, with the grant of up to $100,000 that Amie has been awarded as a 2019 Bush Fellow, she will be able to pursue her education in trauma and pastoral care even more vigorously. As knowledge about the prevalence and consequences of adverse childhood experiences increases, trauma-informed and resilience-building practices based on the research are being implemented in more communities, social service and faith-based organizations, and criminal justice systems.

As Amie continues to bring light to those darkened by past trauma, she also continues to serve the School of Theology and Seminary community. Over the past year, Amie as contributed her time ceaselessly to the benefit of the SOT/Sem, spending time being interviewed for the quarterly newsletter, for this feature article, and most recently giving a spectacular Keynote Address at this summer's Reunion 2019 Alumni Award Banquet. You can read the full text of Amie's Keynote Address here.