The Calvin Institute of Christian Worship has awarded a $15,000 Vital Worship Grant to Saint John’s School of Theology and Seminary in order to promote vibrant musical expressions in worship by learning skills for leading liturgical music from a variety of diverse sources. The proposal by Father Anthony Ruff, O.S.B., Associate Professor of Theology at the SOT/Sem reads:

We believe that the practice of liturgical music in our graduate school, undergraduate campus ministry, and surrounding parishes – all predominantly Anglo, Catholic communities – would benefit by being enlivened and diversified. We hope to draw on ecumenical and multicultural resources in order to unleash latent creativity, musicality, and expressiveness in our communities and their music ministers. 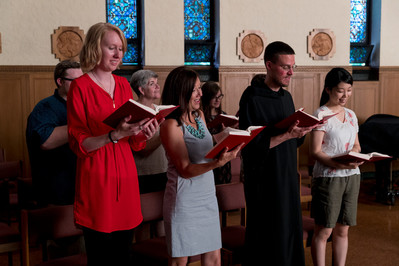 The grant will fund a year-long project beginning in June 2017, joining 32 other worship renewal projects. These projects have a variety of emphases – visual arts, storytelling, music, preaching, contemplation and more – but have as a common purpose a desire both to deepen people’s understanding of worship and to strengthen practices of public worship and faith formation. The awards range from $6,000 to $18,000 per project.

Saint John’s SOT/Sem seeks to enliven congregational participation in the school’s chapel worship by drawing on ecumenical and multicultural resources, in relationship to the school’s historic strength in chant and organ-based traditional repertoire. The grant proposal highlights:

We are especially interested in cross-fertilization: How can the free, improvisatory style of Gregorian chant as witnessed in recent semiological interpretations and the improvisation of so-called black spirituals inform each other? How can the dance-like character of Latin American and African repertoires and that of so much Baroque music and chorales such as GENEVA 42 inform each other?

Other recipients are from around North America and include 20 congregations, one high school, four colleges and universities, three seminaries, and five other organizations, including a retirement community, a military ministry, a hospital ministry, a denominational worship committee and a regional synod. They also represent congregations and schools from 18 denominations, 19 states and two Canadian provinces.

Since it began in the year 2000, the Vital Worship Grants Program has now awarded 784 grants to churches, schools and organizations across North America for projects that generate thoughtfulness and energy for public worship and faith formation at the local, grass-roots level. An advisory board of pastors and teachers from a variety of backgrounds assisted in the grant selections.

A full listing of the 33 grants awarded is found here. This program is made possible through a Vital Worship Grant from Calvin Institute of Christian Worship, Grand Rapids, Michigan, with funds provided by Lilly Endowment Inc.