Let the Spirit do the Work

"One of the best gifts the SOT/Sem gave me was the ability to pay attention to how God is calling me." 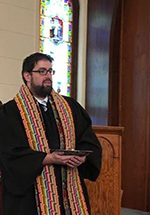 Reverend Tony Romaine, M.A.’13, used to have big plans for what he would do with his education from Saint John’s School of Theology and Seminary (SOT/Sem). He pictured a life as a military chaplain and contemplated becoming a professor.

It wasn’t until the Holy Spirit reached him with what he describes as his “when” moment that Tony realized something—God would make clear his path when he was ready to get out of the way and let God be God. Today, he’s an ordained reverend in the United Church of Christ (UCC) in Staples, Minnesota.

It’s certainly been a transition for Tony. “People look to me for their spiritual needs,” he explains. “That’s a daunting responsibility.”

At first it seemed “odd.” It was amazing and a little surprising to see people turning to him as a spiritual leader. Quickly though, Tony came to recognize the Spirit at work in this as well. “I feel so blessed that God would choose me,” he says about helping members of his congregation access Holy Scripture and discover its meaning in their lives.

According to Tony, the SOT/Sem prepared him in important ways. He grew spiritually with courses like Intro to Christian Traditions. And, while he grew academically with New Testament Greek and Preparing Homilies, sermons were still a challenge for him at first.

“I used to get hung up on delivering a good sermon or a bad sermon,” he recalls. “Eventually I learned, it’s not about you. People need access to the Word and our job is to share that with them, and then let the Spirit do the work.”

He explains, “One of the best gifts the SOT/Sem gave me was the ability to pay attention to how God is calling me.” Some weeks Tony will plan a scripted message, carefully writing it out word-for-word, only to realize on his drive to the church that God is asking him to talk about something completely different. “It takes trust and belief in God, and those only come from a deep exploration of spirituality.”

Tony went on to the ordination track after completing his master of divinity and a two-year period of prayer, discernment and conversations. In the UCC, there’s a process through which one comes forward as a “member in discernment,” and goes through an extensive series of interviews, councils, questions and considerations, including psychological examinations, before being considered for this important role.

On Nov. 19, 2016, Tony was ordained. He credits his SOT/Sem experience for being transformative. “Every Christian should go to seminary,” he believes, “to make God’s Word known to oneself and, thus, others.”