Fr. Mark’s poetic final gift: Thamert shares his reflections on the end of a rich life 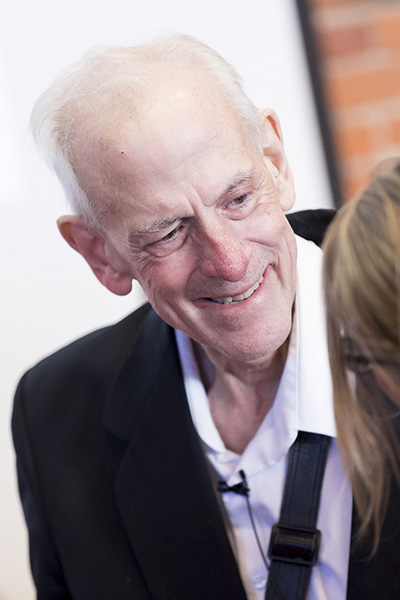 This was one last lesson, taught by a masterful instructor who made teaching his life’s mission.

This was a final reflection on life itself, offered with perspective and humility and humor by a man viewing it all through the lens of his own mortality.

This was quintessential Fr. Mark Thamert, OSB, doing what he has done best throughout a rich life that’s about to end.

“I want you guys to be the send-off party for me,” said Fr. Mark ’73, SOT ’79, a beloved Saint John’s University institution who is in the final stage of a three-year battle with stomach cancer.

“I can picture it like a football stadium or something,” he said with a smile, “running through and handing me off to the Divine.”

“I think a lot of people are inspired by his terminal illness and because he’s been so brave in coming forward and talking so openly and elegantly,” said Matt Beirne ’94, CSB/SJU’s director of admissions. “This is an absolute gift. I wasn’t sure he would make it this long.”

“There are many words that can be used to describe Fr. Mark by those of us who have come to know and love him,” added George Maurer ’88, who introduced Fr. Mark to Wednesday’s overflow Lunch and Learn audience at SJU’s Centenary Room and to those watching a live-stream broadcast. This event was hosted by the Benedictine Institute of Saint John's.

Fr. Mark has been all that and more to countless people during a Saint John’s career that spans five decades.

Most of all, he’s still a teacher. Wednesday’s session began as a virtual classroom presentation, complete with history and poetry, visuals and a laser pointer, literature and music and bilingual references to Rilke and Tolstoy and Rodin.

“Beautiful music, isn’t it?” Fr. Mark said while reading poetry and switching seamlessly between English and German. “That’s also a picture of my life, going from fullness and strength and then there’s a turn and a needing to deal with the turn.

Another poem turned into a food metaphor, apropos for someone who’s a gourmet chef.

“His ‘Monk Three-Pepper Soup’ is the best thing I’ve ever had in my life,” said Beirne, who as an SJU student was introduced to Fr. Mark’s culinary skills. “That’s what makes this so amazingly tragic – the guy who loves food and can make the best food you’ve ever tasted gets stomach cancer and can’t really eat.”

“I love to cook. I love preparing things,” Fr. Mark said. “I’m seeing myself going on just a little ahead of you guys in order to get things ready.

“The Lord said, ‘I’m creating a place for you. I’m going on ahead of you. Don’t be afraid.’ That’s the most important message – don’t be afraid.”

He spoke without trepidation, without hesitance, without fear. If anything, Fr. Mark was energized by Wednesday’s gathering.

“I have my narcotics,” he said, patting the black bag hanging beneath a sport coat that 50 pounds ago wasn’t several sizes too big. “This is the best I’ve felt in three years right now. I’m glad that you’re a part of it.”

But he’s also realistic. His cancer is in its final stage, as is his life.

“As I’ve told some friends, this time isn’t so much fear of dying,” Fr. Mark said, voice cracking. “It’s just sadness … at losing you folks.”

And yet, he discovered a gift during the process.

“This last chamber, this last room I’ve entered, was every bit as much a mystery as dying itself,” Fr. Mark said. “You have no idea what these last days, these last weeks are going to be – and they’ve been amazing.

“My relationships have all changed. Almost all of them have intensified, and have become beautiful beyond all expectation.”

Fr. Mark looked out over the room, over the poetry, over his life. It has come full circle.

“I circle around God, the ancient tower,” he said, quoting from a Rainer Maria Rilke poem. “Lord, it is time.

“And we’re all in this together, aren’t we? But there’s some beauty in it.”