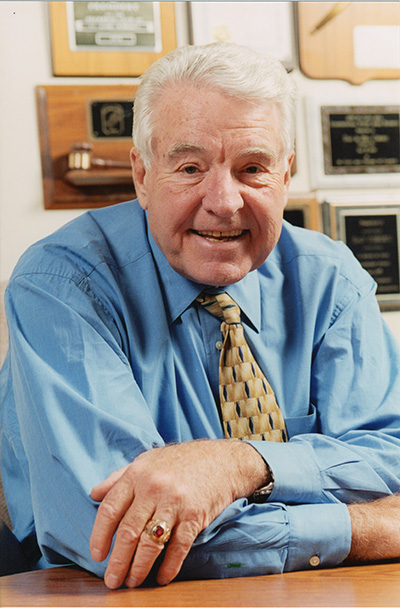 A 1952 graduate of Saint John’s University, Dan Coborn and his family and business have been exceptionally generous to Saint John’s in current and past SJU capital campaigns, including donations to the Art Center, science building and athletic facilities (including Haws Field, the soccer field). They also established the Coborn Family Scholarship Fund at Saint John’s University and the College of Saint Benedict, which has supported 60 students since it was begun in 2005.

He was a well-known name among Midwest consumers as owner/director and chairman of the board of Coborn’s, Inc., a successful chain of more than 120 retail locations with annual revenues of $1.2 billion.

Coborn received the Fr. Walter Reger Distinguished Alumnus Award in 2002 from Saint John’s for his tireless work on behalf of SJU. Tom McKeown '52, who nominated him, said in the nomination letter, “Dan has built a very successful business whose principles embody what we have all learned from the Benedictines. I am sure you know him as I do, as a modest, good humored and effective human being who, while enjoying considerable success, has not changed in 50 years.”

An advocate for both private and public higher education and health care institutions in Central Minnesota, Coborn served as a past Trustee at CSB, on the Minnesota State Colleges and Universities Board and on the board of St. Cloud Hospital.

Coborn’s business leadership and philanthropic efforts have been recognized locally and nationally. In May 1999, Dan, along with his now deceased brother, Bill '56, received the St. Cloud Chamber’s Entrepreneurial Success Award. The award recognized individuals who owned or operated a business that was launched as a small business but developed into a large business. Because of his philanthropic spirit, Coborn’s, Inc., was one of 10 companies honored for its corporate giving program by the Newman’s Own/George Award, which was sponsored by the late actor Paul Newman and the late George Magazine editor John F. Kennedy, Jr.

“Saint John’s and the entire central Minnesota community will always be indebted to Dan for his record of service and community engagement,” commented Rob Culligan, SJU vice president for institutional advancement. “Saint John’s is especially grateful for his and his family’s support for athletics and student scholarships. Through his great generosity, Dan has touched the lives of hundreds of students and they, in turn, have helped transform the communities in which they live.”