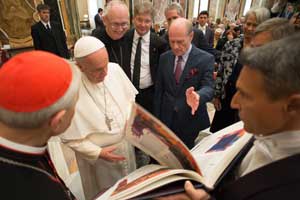 The final volume of the limited, full-sized fine art edition of The Saint John's Bible was presented to His Holiness Pope Francis by the Papal Foundation and Saint John's University. As Pope Francis saw the illumination portraying the heavenly Jerusalem, he raised his hands motioning in praise, blessing and thanksgiving.