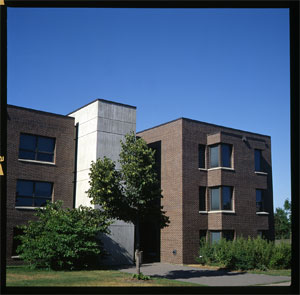 Virgil Michel House was designed by Lee Tollefson of the Rafferty Rafferty Tollefson Lindeke firm in Saint Paul, Minnesota. Constructed in 1987, the building consists of suites and apartments.

All floors have large lounges, which include communal kitchens.

Virgil Michel House was named after Father Virgil Michel, O.S.B., founder of the Liturgical Press at Saint John's and one of the founders of the liturgical movement in America - promoting social justice as a natural outgrowth of Christian faith and worship. He was also involved in the Catholic Worker Movement with Dorthy Day.