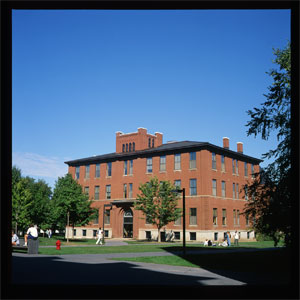 Simons Hall was the first natural science building at Saint John's. Designed by Father Raphael Knapp, O.S.B., it was constructed in 1910 and featured tiered lecture halls and hands-on laboratories. It also boasted one of the first ham radio operations in the state.

When the natural sciences moved to the new Peter Engel Science Center in 1966, Simons Hall began to serve the art department, the English and philosophy departments, and the US Army ROTC Program.

Whereas the main Quadrangle revealed red bricks when the plaster was removed on the interior, Simons Hall revealed yellow brick, making for a lighter and brighter interior.