Zach Vertin ’05 has spent almost 16 years since his graduation from Saint John’s University building his foreign policy credentials across the globe.

Now, the Breckenridge, Minnesota native is about to take on his most high-profile assignment yet.

In January, Vertin was appointed a senior advisor to Linda Thomas-Greenfield, President Joe Biden’s nominee as U.S. Ambassador to the United Nations – meaning he will play a key role in shaping the new administration’s efforts and policy at the U.N.

“I’ve been incredibly fortunate to have opportunities to work as a diplomat, foreign policy nerd and writer in Washington and New York, but it's the time on the road – from the Persian Gulf to China to the Horn of Africa – that has been most formative,” Vertin said.

“I’ve spent a lot of the last 15 years abroad, learning from Americans and foreigners alike about the hard work of international diplomacy, conflict resolution, mediation and political transitions. I'm honored to join the team now representing the United States in New York, and hope to put this experience to work in helping rebuild American diplomacy at the U.N.”

He worked as a senior analyst for the International Crisis Group in New York and in the Horn of Africa. During the Obama Administration, he became a senior advisor to the U.S. Special Envoy to Sudan and South Sudan.

That put him front and center when the nation of South Sudan was established in 2011 – events he wrote about in his book “A Rope from the Sky: The Making and Unmaking of the World’s Newest State.”

Most recently, he served as a Fellow at the Brookings Institution and Brookings Doha Center and a Lecturer of Public and International Affairs at Princeton University.

“There is so much work ahead,” he said of his new role. “A global pandemic, a growing climate crisis, violent conflict and a fraying international order – the new administration faces no shortage of challenges on the world stage.”

But, he added, he is confident in the “top-shelf” team President Biden has assembled to meet those challenges.

That team certainly includes his new boss. Vertin has had the chance to get to know Thomas-Greenfield over the years, and said he is looking forward to being part of her team.

“I first met Ambassador Thomas-Greenfield when she was our lead diplomat in Liberia, and was then lucky to work with her during the Obama years when she served as Assistant Secretary of State for Africa,” he said. “We have stayed in touch since, and she generously invited me to speak to her classes while she was teaching at Georgetown University.

“Linda is a committed public servant, is revered by her fellow diplomats and has great ideas about reinvigorating our foreign policy institutions.”

Vertin also credits fellow SJU graduate Denis McDonough ’92 with providing valuable assistance early on in his career. McDonough, the former White House Chief of Staff in the Obama Administration, is now serving as Secretary of Veterans Affairs in the Biden Administration.

“Denis is a friend, a role model to anyone working in public service and, most importantly, a good guy,” Vertin said. “(He) and his wife Kari took me in when I first came to Washington in search of a career, and they were extraordinarily generous – both personally and professionally.

“It’s no secret that Denis is hugely talented and hard-working, but what’s more remarkable is the way that he has carried himself while navigating the highest echelons of government. You’d be surprised to hear how many young and mid-career professionals across the government have stories of Denis showing interest in them, lifting them up and supporting their work.”

For his part, McDonough said he is pleased Vertin will be a key part of the U.S. delegation at the U.N.

“I know him well,” McDonough said. “He spent a good amount of time with my family and I when he first moved to (Washington, D.C.) and we have stayed in touch as his career has progressed (and progressed so well).

“He is a talented guy and I was thrilled to see the news that he is going to work for USUN, as we say.”

Vertin said the liberal arts education he received at CSB/SJU helped prepare him for the challenges he has taken on since his graduation.

“I remain incredibly grateful for my years at SJU,” he said. “It was a time of great intellectual stimulation, much of which I spent arguing with the philosophy faculty (and losing). Rather than any specific tool or trade, it was the critical thinking skills they imparted that I've found most valuable in confronting the hard choices and tradeoffs of politics and policy-making.

“And as a philosophy major who has mostly been able to hold down a job, I remain a firm believer in liberal arts education.” 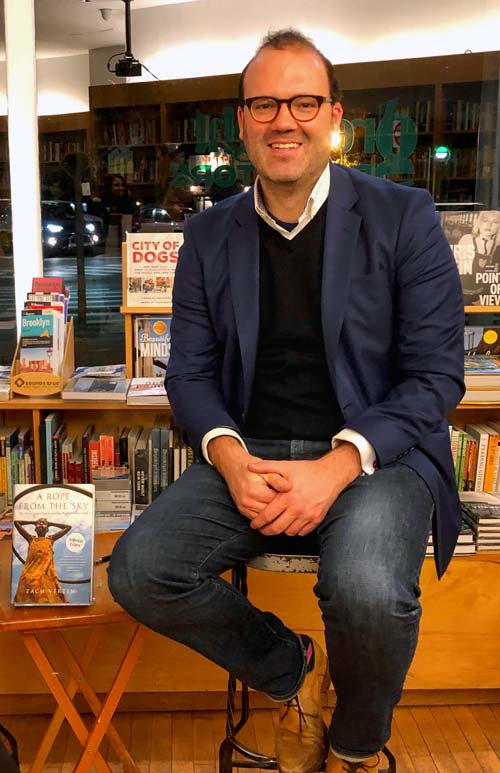