“I am confident that Dan will diligently tend to the mission of Saint John’s with particular focus on the priorities the Board of Regents has outlined for his term,” said Frey. “I am certain that Dan’s leadership will inspire the trust and confidence of everyone in the Saint John’s community.”

“Dan is a remarkably kind and generous man,” said Reinhart. “His willingness to serve as interim president of Saint John’s University reflects a deep love and gratitude for the educational community that has nurtured his heart and fired his desire to make a difference in the world. The leadership of Saint John’s could not be in better hands!”

“I cannot fill Br. Dietrich's shoes. No one can,” said Whalen. “But thanks to Br. Dietrich's remarkable leadership, Saint John's is a strong and resilient institution. I am excited about joining the first class leadership team that he put together. And I am pleased to join the partnership with Dr. MaryAnn Baenninger and the College of Saint Benedict.”

“Dan Whalen is an excellent choice for interim president of Saint John’s,” said MaryAnn Baenninger, president of the College of Saint Benedict. “I’ve had the pleasure of working with Dan during his time as chair of the Board of Regents, and I look forward to working with him again as interim president. Dan is a man of character, creativity and compassion. He has a great wit, and a warm, welcoming sense of humor. He understands and supports Br. Dietrich’s vision. I look forward to having Dan as a partner in the coordinate relationship between College of Saint Benedict and Saint John’s University.”

Whalen grew up in Argyle, Minn. and East Grand Forks, Minn., where he, after attending Saint John’s Preparatory School for one year, graduated from Sacred Heart High School. In the mid-1960s, Whalen, his mother and his siblings moved to St. Cloud, Minn. Whalen attended Saint John's University and majored in government.

After Whalen graduated from Saint John's in 1970, he worked on a factory assembly line, attended the University of Minnesota's School of Public Affairs, served as a policy analyst at the federal government's Administration on Aging, managed George McGovern's presidential campaign in Minnesota's sixth congressional district, was a policy analyst with the Institute of Medicine of the National Academy of Sciences, worked as a management consultant in Washington, D.C., was director of health planning for New York state and served as a health policy specialist for Governor Jay Rockefeller of West Virginia.

After Whalen earned MBA and MA (food research) degrees from Stanford University in 1980, he worked at AT&T as a business marketing manager and as the first director of cellular telephone operations in New York state and New England, served as vice president of operations of Cellular One in Washington, D.C. and Baltimore and was executive vice president and member of the board of directors of Tetra Tech, a publicly traded engineering company. Whalen founded or co-founded five telecommunication industry companies including Whalen & Company, an international cellular telephone development company that he headed for 10 years. Whalen is presently principal investor and executive chairman of Vello, Inc., a startup teleconferencing company.

In addition to Whalen's academic and professional achievements, he is a philanthropist who truly embodies the spirit of giving. Whalen has extended his generosity to Saint John's Abbey; the College of Saint Benedict; Saint Benedict's Monastery; Laketrails, a summer camp in northern Minnesota; The Humphrey Institute at the University of Minnesota; Anna Marie's, a shelter for battered women in Saint Cloud, Minn., named for his mother; a number of projects in Bosnia and Herzegovina; Saint-Martin-in-the-Fields in London; Boys and Girls Clubs of Oakland, Calif.; Girls Inc. of northern California, the Diocese of Oakland, Calif.; Redwood Day School in Oakland, Calif.; Lick-Wilmerding High School in San Francisco; Tulane University; Center for Early Intervention on Deafness in Berkeley, Calif.; the University of California at Berkeley; the Positive Coaching Alliance; and Stanford University Graduate School of Business.

Much to the benefit of Saint John’s University, Whalen and his wife, Katharine, have looked upon the school with an extraordinary degree of generosity. Over the years, the Whalens have supported numerous projects, including the Annual Fund, the Eugene J. McCarthy Center for Public Policy & Civic Engagement, faculty development, land acquisition and conservation, a dean’s fund, The Saint John’s Bible and scholarships for Bosnian students to attend Saint John’s University and its educational partner, the College of Saint Benedict.

Whalen’s financial generosity is matched only by his willingness to share his time and talents. Whalen has been a member of the Saint John’s Board of Regents since 1997, serving as its chair from 2004-07, and was campaign chair for the just completed capital campaign One Generation to the Next: The Campaign for Saint John’s, which secured $168 million against a goal of $150 million and has been the largest and most successful capital campaign in the University’s history to date.

Whalen lives in Oakland, Calif. with Katharine, and their three children, Matthew, Anna and Michael.

The Board of Regents will now initiate a search for the 12th president of Saint John’s University. 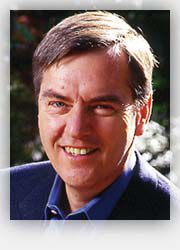