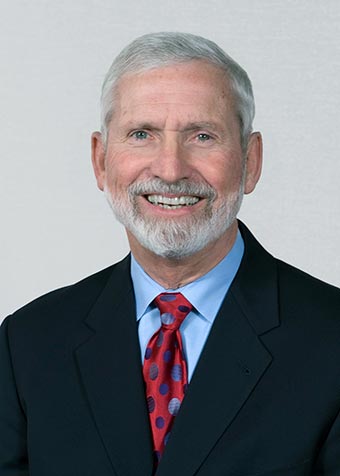 Roering will receive the award during the SJU Reunion kickoff program that begins at 10:30 a.m. Saturday, June 22, in the Stephen B. Humphrey Auditorium, SJU.

“I’m so indebted to Saint John’s that I don’t feel like I need to be recognized in any fashion,” Roering said. “I owe a great debt for what they’ve done for me.”

Roering graduated from SJU with a degree in English. He went on to earn a Ph.D. in business administration and had a highly successful career in academia. Roering is professor emeritus in the Carlson School of Management of the University of Minnesota. He occupied the prestigious Pillsbury Company-Paul S. Gerot Chair in Marketing from 1982-2004. He served as visiting professor or distinguished guest lecturer at a number of universities.

Roering’s professional achievements include numerous honors as a consultant and board member for prominent national companies, non-profit and charitable organizations.

He served on SJU’s Alumni Board in 2004, Board of Regents/Trustees from 2006-13 and as a volunteer for his graduating class. Roering chaired the Saint John’s Presidential Search Committee that identified, recruited and successfully hired Michael Hemesath in 2012.

“As Walter Reger recipients are always recognized for their exceptional service to the Saint John’s community, it is most appropriate that Saint John’s now recognize Ken Roering’s tremendous contributions to Saint John’s, with the Walter Reger Award,” said J. Michael Dady, SJU class of 1971, in his nomination letter.

Roering distinguished himself on the gridiron at Saint John's as a two-time All-American football player and key member of the 1963 NAIA national championship team. Over 50 years later, Roering still ranks in the top 10 all-time in yards per reception.

“John Gagliardi was immensely significant in my life,” Roering said. “I made a lot of good friends who I still stay in touch with.

“It reinforced some of the fundamental lessons of life – try hard, do your best, get up when you get knocked down, do good and play by the rules. That really served me well in my academic career.”

His Saint John’s awards include the Alumni Achievement Award in 2009, the Bob Basten Excellence in Leadership Award in 2012 and the Notable Alumnus Award in Education.

He befriended hundreds of Saint John’s students and maintained personal correspondence with them after they graduated. Reger died in 1971, and the Alumni Association Board of Directors Launched the award program later that year.

Launched in 1983, the Alumni Achievement Awards recognize SJU alumni who have been successful in their careers and/or active in church and community service. The awards are presented annually by the SJU Alumni Association Board of Directors and the university.

Each 20- through 50-year reunion class recognizes an individual classmate for his accomplishments. An awards presentation is part of each class reunion dinner.