So how did Minnesota Sen. Tina Smith face two elections in two years?

After Minnesota Sen. Al Franken resigned in early 2018, she was appointed to the seat by Governor Mark Dayton after serving as Dayton’s Lieutenant Governor for three years.  Smith then ran (and won) Senate elections in both 2018 and 2020 to hold her seat. She was sworn in for the third time - and for a full six-year term - in January of 2021.

Smith will discuss her path to the Senate and her work when she presents the 2021 Eugene J. McCarthy Lecture at 7:30 p.m. Thursday, Oct. 14 at the Stephen B. Humphrey Theater, Saint John’s University.

The lecture, sponsored by the Eugene J. McCarthy Center for Public Policy and Civic Engagement, is free and open to the public. Following her presentation, Smith will take questions from the audience.

“I am honored to have the opportunity to deliver the 2021 Eugene J. McCarthy Lecture, and to share this celebration of his life and legacy,” Smith said.

“As a Minnesotan, I’ve been inspired by his storied service to our state and our nation. As a senator, I’ve tried to emulate his commitment to new ideas, his willingness to take on hard issues, and his insistence on giving all people a voice in our government. And as an American, I’ve admired his courage to challenge the status quo and to stand up for the ideals and principles of democratic self-government that have helped forge our nation’s character for more than two centuries,” Smith said.

An unusual path to the U.S. Senate

Smith is a native of New Mexico who graduated from Stanford University in 1980. Four years later, she earned an MBA from the Tuck School of Business at Dartmouth College.

Following a move to Minnesota in 1984, she worked at General Mills in marketing. Later, Smith started her own marketing firm for businesses and nonprofits.

In 2006, Smith left her job as vice president of external affairs at Planned Parenthood to serve as chief of staff to then-Minneapolis Mayor R.T. Rybak. In 2010, Smith joined Mark Dayton’s successful campaign for governor, and served as co-chair of his transition team.  When he took office, Dayton named her chief of staff.

She served in that role until 2014, when Dayton tapped Smith to be his running mate during his successful campaign for a second term.  She was sworn in as Dayton’s lieutenant governor in early 2015 and held that position until being appointed to the U.S. Senate.

Since coming to the Senate in 2018, Smith has traveled the state and worked to be a fierce advocate for the people and communities across Minnesota. In just over three years, she has built a successful bipartisan record, with more than 50 bills and provisions signed into law to benefit the state’s working families, farmers, veterans, businesses and Tribal communities.

The annual McCarthy Lecture carries McCarthy’s deep commitment to the ideals and principles of democratic self-government. It seeks to inspire a new generation of young people to pursue fresh ideas, to challenge the status quo, to effect positive change in their communities and, like McCarthy himself, to lead with honesty, integrity and courage.

Past lecturers in the series have included two SJU graduates – Minnesota Sen. Dave Durenberger, a 1955 graduate who presented the 2014 lecture, and former White House Chief of Staff Denis McDonough, a 1992 graduate who delivered the 2018 lecture (he currently heads Veterans Affairs). 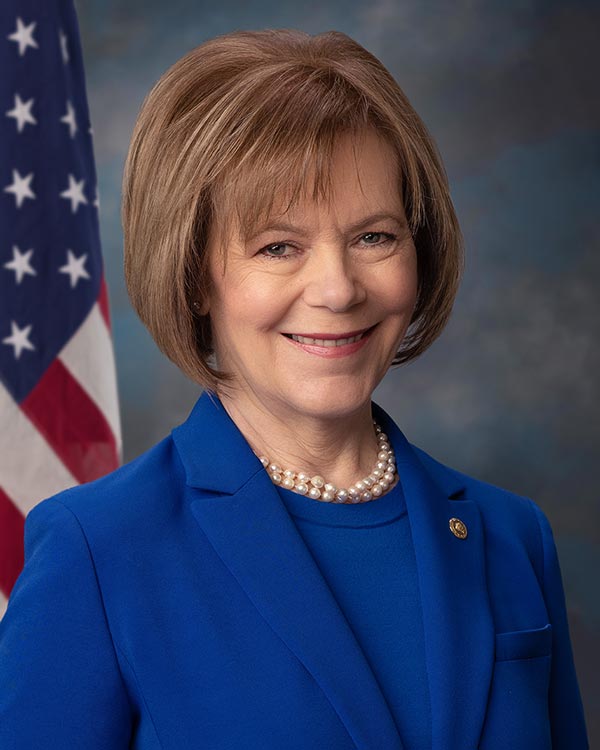