In a summer where emotions in urban areas ran hot, a few Saint John's University students sought to cool tempers and bring a community together through the spirit of giving. 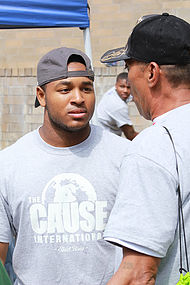 This team of five SJU students flew in from all over the country to host a $6,000 giveaway of customized and donated clothes and bags, food, health kits and haircuts in downtown Los Angeles' most impoverished neighborhoods — Skid Row.

Also involved in the process was Jehnna Benall of Minneapolis, Alex Kuene of St. Cloud and Abdi Musse from Kenya.

A "skid row" was an area, in days past, in which loggers would idle about waiting for transportation back home after moving their goods to their final destination. Thus, the term has been used for places where the indigent and unemployed gather with seemingly nothing to do.

The Skid Row in downtown L.A. contains one of the largest homeless populations in the United States — estimated between 3,000 and 6,000 people.

Having grown up near this area, Taylor thought this would be the perfect place to make the next move of his company, The Cause, International. The Cause is a brand that creates opportunities for individuals and assists those that are in need. It also allows young individuals to come together and have a strong impact on present day society.

After walking around two weeks before the event and asking what these disadvantaged people needed to be more comfortable, the SJU students set about making this event happen. Starting in January, money was raised, materials were donated and permission was granted by the Los Angeles Police Department for a space outside its building for the July giveaway.

"In the beginning, I had a lot of doubt because I didn't know how it would go; I was a bit scared about whether people would actually show up. But we're there setting up tents and people are already lining up and seeing how many people were coming, it was an adrenaline rush," Lucas said.

It certainly was a risk. One danger was the prominent gang presence in the area. No one was sure if anyone would even attend an event in front of an L.A.P.D. station.

"One of the biggest difficulties we faced was the security of our team. Obviously, we are out there to help those who need it but there is also a gang presence in the Skid Row community that we had to interact with. We held the event in front of the police station but they did not give us security," Oliver said. 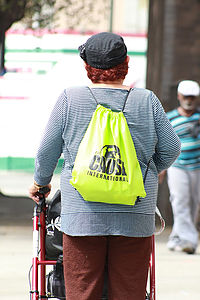 The proceedings went smoothly, however, and the SJU team was enthusiastic about the results, having delivered aid to over 200 citizens.

"We didn't know how it was going to go, we'd never done anything like this before. And I was really surprised. I knew we would make an impact but I had no idea of the magnitude of that impact. It was something words cannot explain," Taylor said.

Far from being a mere cold exchange of goods, the beneficiaries showed an immense gratitude that animated all involved into a joyous mood.

"I saw a lot of laughter, they would come around and make jokes; one of the guys was having a heart to heart with one of our teammates. They wanted somebody there to talk to and care, not just somebody who hands you something and walks away," Lucas said.

"Most of the emotion from those who we were helping was just awe. They were just so happy to see someone showing that they care for them. Especially since it was young people who organized the event. A moment that really humbled me was when one man hugged me after receiving clothes, water and cleaning kits. He broke down crying tears of joy that someone was willing to help him out," Oliver said.

Making up this team of philanthropists are SJU students who are no strangers to the pangs of hardship, carrying their own personal tales of tragedy and struggle. Being closely acquainted with such misfortune, their hearts were moved that much more in seeing it alleviated in others, even for a brief moment.

"In my own life, I was blessed to be able to go to SJU and play football, God placed different things in my future. Things could have easily gone differently. It makes you humble for the things you have. It felt amazing to help people. It's a feeling I've always longed for," Taylor said.