Home / Newsroom / Back to the future: CSB graduate continuing to learn importance of bilingualism

Back to the future: CSB graduate continuing to learn importance of bilingualism

Editor’s note: This feature story on Kelsey Tatarek ’18 is the sixth of seven feature stories that will appear this summer on the College of Saint Benedict and Saint John’s University website featuring graduates who received awards from the Fulbright U.S. Student Program. 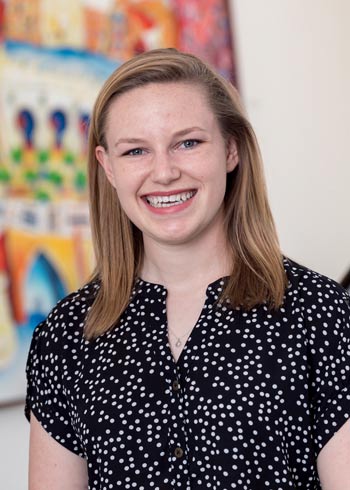 Long ago, Kelsey Tatarek realized the importance of bilingualism.

This came early in her life, when she attended Park Spanish Immersion School in St. Louis Park, Minnesota, which is dedicated toward bilingual immersion for students in grades K-5.

“Students at Park Spanish Immersion formally learn Spanish across all subject materials and do not attend a formal English class until the third grade,” said Tatarek, a 2018 graduate of the College of Saint Benedict. “I was instructed by primarily native teachers as well as teacher’s assistants from Spanish-speaking countries.”

Flash ahead a few years, and Tatarek is hoping to do the same thing, only in reverse.

She has received an award from the Fulbright U.S. Student Program, sponsored by the Department of State and the J. William Fulbright Foreign Scholarship Board, to serve as an English Teaching Assistant (ETA) in Spain. Tatarek will begin her program Sept. 10, teaching elementary school students in Logroño, La Rioja, Spain.

“Bilingualism is important to me because it is a way to directly connect with people from other cultures. Bilingualism, I believe, is an essential element necessary for individuals to gain a global perspective of the world,” Tatarek said.

This year, seven CSB and SJU graduates received Fulbright awards. In the last five years, 30 students or graduates from CSB and SJU have earned Fulbright ETA awards. John Beckius ’18 was a late addition to the group, and will serve as an ETA in South Korea.

“One of the reasons I was drawn to the Fulbright program was because of my previous experiences of learning from native teacher’s aides,” Tatarek said. “Through the Fulbright, I am now able to provide a similar experience to other students in Spain.

“Bilingualism connects individuals and allows people to better understand one another, hopefully lessening the divides that separate people from differing cultures and societies,” she said.

Tatarek, a Hispanic studies and natural science double-major at CSB, is returning to Spain for a second time.

“While studying abroad (during spring semester 2016), I was able to travel to multiple regions and cities throughout Spain and was enamored with the Spanish culture wherever I went,” Tatarek said.

“I am a huge soccer fan and love that the sport is deeply rooted in the culture. Everywhere you go, the sport has cultural relevance and is an integral part of the Spanish lifestyle, whether it be playing the sport or cheering on your favorite team,” said Tatarek, who was named CSB’s midfielder of the year in 2017.

She said she was looking forward for her upcoming experience.

“I am excited to experience a new region in Spain and to connect with the local children and residents,” Tatarek said. “La Rioja is the smallest region in Spain, but still filled with a vibrant culture and atmosphere. Logroño is the capital of La Rioja, and I am excited to explore the scenery of Logroño, as the Ebro (River) and part of the Camino de Santiago (pilgrimage trail) pass through Logroño.”