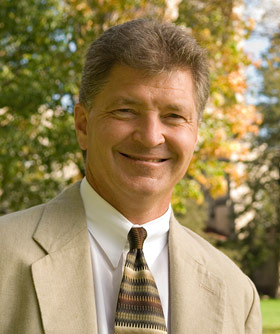 Michael Hemesath, professor of economics at Carleton College, has been appointed the 13th president of Saint John's University by the university's Board of Regents. He will begin his official duties on July 1, 2012. A 1981 SJU graduate, Hemesath is the first lay president in the 155-year history of the institution.

"The selection of a lay president represents a new era in the long history of Saint John's University, yet I want to emphasize the continuity that will be at the heart of this transition," Hemesath said. "A Saint John's education has been transformative for generations of young men precisely because of the Catholic Benedictine heritage that makes this institution a rare and wonderful gift to higher education. The privilege of serving as Saint John's 13th president is both tremendously exciting and humbling. The Saint John's community both shaped and shapes me, and it is a rare gift to be able to lead my alma mater through this important transition in the relationship between the monastery and the university."

"I was reminded throughout the search process of the many groups who care deeply about this place, this institution, from the members of the monastic community, to the many alumni around the world, to the staff and faculty and the student body," Hemesath said. "It is clear that I will have exceptional support from the community as we build a strong and vibrant future for Saint John's."

"The Board selected Dr. Hemesath because he is passionate about Saint John's University's ability to transform young men's lives through its commitment to the liberal arts and its embodiment of Benedictine values, and because of his outstanding background as a scholar and faculty leader at Carleton College," said Ann Huntrods, chair of Saint John's Board of Regents. "Dr. Hemesath is uniquely qualified to lead Saint John's at this historic time. It is apparent that Dr. Hemesath understands the importance of the ties between the university and the abbey even as their relationship evolves."

In addition to teaching micro and macroeconomics, Hemesath teaches courses on international economics, Soviet and post-Soviet economics and health economics. His research interests focus on the challenges facing the former communist countries as they reform their political and economic systems. This research has taken him to Russia and given him the opportunity to teach in the master's degree program at Kiev-Mohyla Academy in Ukraine. Hemesath participated in the Pew Fellowship in International Affairs at Harvard in 1990-91, and has been using cases in his courses ever since. Hemesath is currently the director of EthIC, the Ethical Inquiry at Carleton program. The program is designed to develop curricular and co-curricular activities that encourage the exploration of ethical issues throughout the Carleton community.

Hemesath is also deeply committed to off-campus studies programs. He has directed three Associated Colleges of the Midwest programs in Krasnodar, Russia, and has been faculty director for Carleton's Economics Seminar at Cambridge University five times, most recently in summer of 2007.

"On behalf of the Saint John's community, I extend a warm welcome to Dr. Hemesath," said the Rev. Robert Koopmann, OSB, 12th president of Saint John's University. "I am confident he possesses the personal skills and professional experience needed to lead this great institution. He brings with him a thorough understanding of contemporary higher education and a deep appreciation for the Benedictine values that are so important to our community."

"I am delighted that Saint John's University has chosen Dr. Hemesath as its next president, and I am eager to begin our partnership in leading these two great institutions," said MaryAnn Baenninger, president of the College of Saint Benedict. "His background and qualifications are stellar. More importantly, he has high aspirations for SJU, as I do for CSB. I believe that together our leadership will guarantee a bright future for CSB/SJU."

Hemesath is the first layperson to be appointed to a full presidential term at Saint John's University. Daniel Whalen '70 served as interim president from 2008-09.

"Dr. Hemesath cares deeply about the Catholic and Benedictine character of Saint John's University and will be able to continue to guide efforts to enhance these dimensions of our educational work. At this time of transition in the structure of university governance, Michael understands the significance of this moment for Saint John's. Because of his experience at Harvard and Carleton, he appreciates the unique character of our spiritual tradition and what it means for students, indeed, everybody on our campuses. Furthermore, when he speaks about the importance of a liberal arts education, he appropriately roots it in the Catholic intellectual tradition. Finally, he has first-hand experience of the integrating character of community life in our residential programs." Abbot John Klassen, OSB, Saint John's Abbey

"In a sense everybody at a college like Saint John's speaks for the place, often proudly, sometimes critically. There's a strong sense of place here. Students quickly pick it up. Veteran profs, coaches, staff members treasure it. One of the president's major functions is to be the voice of this place, speaking sometimes to, sometimes for all of these people. Saint John's is at a turning point in its history as a lay president becomes this voice, guiding and directing internal affairs, representing and speaking for Saint John's to the rest of the world starting with alumni and friends. I wish Dr. Hemesath every success in carrying out this vital role with distinction." The Rev. Hilary Thimmesh, OSB, 10th president of Saint John's University

"Dr. Hemesath's role as Faculty President at Carleton has positioned him to be a strong leader for faculty and Saint John's University as a whole. His love for Saint John's is palpable. As an economist, he brings many skills that will strengthen Saint John's and position the university for the future. I find him to be a thoughtful listener and someone that consistently acts with integrity. During his time on campus, he quickly gained the respect of faculty and staff. We are very excited to bring him on board. I have a high level of confidence in his ability to lead the university and work collaboratively with Saint Ben's to further the academic mission." Carie Braun, SJU Faculty Regent