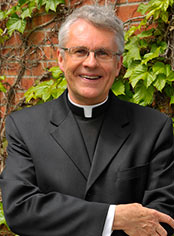 “I’m honored and excited to be selected president,” said Koopmann. “Saint John’s has wonderful students, a first-rate faculty, a dedicated and highly competent staff, very committed board members, alumni, benefactors and friends, an amazing and creative partnership with the College of Saint Benedict, and a mission, together with Saint John’s Abbey, to serve the church and the world. I am eager to lead this institution which I love so much.”

He succeeds Dan Whalen, who has served as interim president of the university since Oct. 21, 2008, after the resignation of the late Br. Dietrich Reinhart, OSB, president emeritus of Saint John’s University.

Koopmann has been a professor of music at the College of Saint Benedict and Saint John’s University since 1975, and served as fine arts division head from 2006-09. For the past four years, he has served on the Saint John’s Board of Regents, and served nine years in a previous term (1994-2003) on the board.

“I am truly excited about Fr. Bob’s selection as our next president,” said Jim Frey, chair of the Saint John’s Board of Regents. “He is an extraordinary man who understands keenly and lives fully the mission, vision and values of Saint John’s. He has demonstrated genuine leadership in the several roles he has played at Saint John’s and Saint Ben’s. I fully expect that this demonstrated leadership will be a hallmark of his tenure as president.”

“I rejoice in Fr. Bob's selection because I know him to be a solid, energetic and creative member of the monastic community, a monk and priest with deep pastoral sensitivity and a seasoned administrator,” wrote Abbot John Klassen, OSB, chancellor of Saint John’s University, in the nomination letter to the Saint John’s Board of Regents.

A native of Waterloo, Iowa, Koopmann professed as a monk of Saint John’s Abbey on Sept. 21, 1971 and was ordained a priest on June 6, 1981. He has advanced degrees from the University of Wisconsin-Milwaukee (master of music), the University of Iowa (doctor of musical arts) and a master of divinity degree from Saint John's School of Theology•Seminary. Koopmann did post-doctoral study with faculty of the Royal Academy of Music in London and the Juilliard School of Music in New York City. Koopmann is active as a concert pianist both in the U.S. and abroad, and has released a number of recordings since 1994. He is the director of music for Saint John’s Abbey.

He was chair of the CSB/SJU music department from 1977-83 and 1985-86. He has served as a faculty resident in the student residence halls at Saint John’s since 1981, most recently at Saint Benet Hall since 2002. Since 1998, he has served as a men’s spirituality group leader, and since 2000 has worked with the Saint John’s Benedictine Volunteer Corps. Koopmann also served as director of international studies programs to Salzburg, Austria and South Africa.

“Fr. Bob is a quiet, humble and effective leader,” said Whalen. “He has a knack of getting difficult things done without drawing attention to himself. He is a true Benedictine.”

“I enthusiastically congratulate Fr. Bob Koopmann on his appointment as president of Saint John's University,” said MaryAnn Baenninger, president of the College of Saint Benedict. “He is a wonderful man who loves both Saint John's and Saint Ben's. His long experience as a faculty member and mentor in the music department and his more recent success as division head in the fine arts will give him a firm foundation upon which to begin a successful presidency. As president of College of Saint Benedict, I look forward to working with him as a partner to secure the future of these great institutions.”