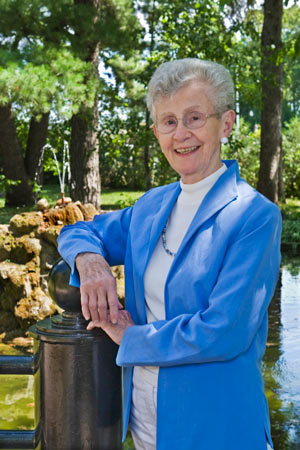 S. Colman was the 11th president of the college, serving from 1986 through 1996 — immediately succeeding her dear friend and CSB classmate S. Emmanuel Renner ’49. She was an educator, an administrator, a visionary leader and a tireless advocate for the college.

After graduating from CSB with her degree in English and communication, she taught briefly at Pierz Memorial and Cathedral High Schools. In 1954, S. Colman received her master’s degree in English and theater from the Catholic University of America. At that point she returned to CSB where she taught in the Theater and Dance Department, serving as department chair from 1954-74. In 1979, Colman earned her doctoral degree in higher education from the University of Michigan.

Two milestones highlighted her tenure in the Theater Department: the construction of the Benedicta Arts Center (BAC) and the collaboration (and eventual coordination) with the Theater Department at Saint John’s University (SJU). The BAC was a bold endeavor and remains a remarkable facility. The year it was finished, 1964, there were nine students at CSB majoring in the fine arts. By 1974 there were over 200 fine arts majors. As chair of the Theater and Dance Department, and a member of the building committee at the time, S. Colman was a leading champion of this campus facility icon.

As a professor, S. Colman was strong, dynamic and demanding. “She had zero tolerance for indolence and a very high expectation that each student would bring their very best into her classroom,” recalled former student Teresa Mazzitelli ’72. “Colman encouraged her students to think critically, be engaged and, quite frankly, she did not suffer fools gladly. But by fostering creative, independent thought, she prepared us to live self-sufficient and purposeful lives. These lessons have stayed with me all these years.”

S. Colman’s term as president was definitely marked with physical progress on the campus. The Clemens Library opened during her first year. Three residence halls, a science center, a campus center and a new southern entrance to the campus soon followed.

But her most significant achievements, in her own words, came in defining and advancing the coordinate relationship with SJU. “I hope that 20 years from now,” she noted at the time, “people will say ‘The colleges made a bold step 20 years ago in creating the coordinate relationship to promote the education of men and women.’ Education for men and for women in this coordinate, gender-conscious environment is the best way to educate students. It is not only superior to coeducation, but also to single sex education.”

“S. Colman’s leadership in creating, developing and sustaining the coordinate relationship between CSB and SJU was foundational and transformational for academics and scholarship at CSB/SJU,” said CSB/SJU Provost Richard Ice – a professor in the Communication Department during S. Colman’s administration. “Our current and future academic successes can be attributed to her determination and leadership in creating and molding the coordinate relationship.”

S. Colman’s service as president ended in 1996, but her passion for the College of Saint Benedict continued. After a few years she stepped in to serve as Vice President of Institutional Advancement, leading the college’s fundraising efforts. In 2005 she transitioned out of the vice president’s office but remained in Institutional Advancement as a Senior Development Officer – where she would continue to serve until she died.

As a development officer she was, perhaps, the most beloved and successful representative of the college, thanks to her earnest appeals and her persistent efforts.

“Any woman who would make a 600-mile round trip to extreme northern Minnesota to bring exciting news about the College of Saint Benedict deserves high praise for her commitment, her perseverance and dedication,” said Frank Marvin, friend of the college. “S. Colman did this for many years, all after turning 70 years of age. Colman was committed to the brick and mortar of Saint Ben’s. But equal to that was her concern for the hearts and minds of her students and her community of sisters. These three priorities were evident in each and every task she undertook, of which there were so many. Colman’s contributions will be an ongoing influence, blessing and empowerment for people, present and future.”

“One of my favorite stories that Colman used to tell was when she would recount her early days on campus and the moment she established her friendship with S. Emmanuel Renner – a friendship for the ages,” said CSB President Mary Dana Hinton. “Even in those early days (Colman was trying to convince Emmanuel to vote for her to be class president) it was clear Colman was going to be a leader on this campus. For more than seven decades she did, indeed, lead. Whether as student body president, a tenured faculty member and chair in the Theater Department, college president or as an extraordinary fundraising professional, S. Colman led with passion, with intellect and with heart. She nurtured generations of Bennies and leaders. She had an equally prominent presence on the national stage in higher education, as a fierce advocate for Delta Epsilon Sigma, Catholic colleges and universities, and all the organizations on whose boards she served. S. Colman leaves a legacy of compassion, of strength and of courage. We will miss her greatly.”

To share your memories of S. Colman and leave words of sympathy for her family and community, visit our online remembrance book.