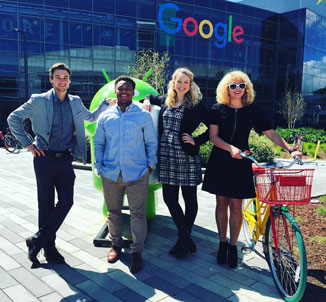 It's an area students from the College of Saint Benedict and Saint John's University know quite well, thanks to the Entrepreneur Scholars program.

Each spring, Entrepreneur Scholars fly to Silicon Valley to visit companies and pick the brains of some of America's top business leaders. Students set up their own visits and managed to secure meetings at Google, Facebook, Uber, Square and Netflix, among others. It marked the 12th consecutive year that CSB and SJU students have visited the technology hub of America.

"The biggest thing (about the trip)? Holy smokes, we went to Silicon Valley," said Roman Derevyanco, a junior economics major from Eden Prairie, Minnesota. "We talked to people at Google, Facebook, Dropbox, some people you would have never imagined. That puts hair on your chest, because I'm not afraid to talk to C.H. Robinson or 3M or anything."

"The trip was very inspiring," said Claudia Eisenhuth, a junior economics major from Mendota Heights, Minnesota. "We got to see some of the most revolutionary companies from around the world. We got to see the innovations, and everything that was going on there. It really gave us a field experience of entrepreneurship."

That's exactly what the trip was designed to do, said Paul Marsnik, professor of global business leadership at CSB and SJU.

Some background: Marsnik and Terri Barriero, the former director of the McNeely Center for Entrepreneurship, created the forerunner of the Entrepreneur Scholars, known then as E-Scholars. Students would take three entrepreneur classes over a two-year period, with the expectation of launching a business venture before they graduated. That's how Clemens Perk, Johnnie Java and T Spot, among others, got started on campus.

"Then I thought in this three-course sequence over two years, what do we want to do besides telling them to try and launch a venture that will help them to build skills and make them more resilient and more able to embrace ambiguity?" Marsnik said. "And I thought, even 12 or 15 years ago, Silicon Valley is all the rage, right? That's sort of the mecca of entrepreneurship.

"So, we'll travel to Silicon Valley and we'll visit companies out there, so they can get a feel for what it is like. They'll get a peek at the best," Marsnik said.

Marsnik didn't know any entrepreneurs in Silicon Valley, so he looked for a CSB/SJU connection. He found Mark Flynn, who had started a venture capital firm in Silicon Valley, Trilogy Capital. Flynn, who graduated from SJU in 1978 and served on the Board of Regents from 2001-10, connected Marsnik with Ron Johnson, a Minnesota native and former executive with Apple and J.C. Penney who is now CEO of a startup named Enjoy.

Initially, Marsnik and Barriero set up all the visits with companies. But that changed about six years ago.

"For probably six or seven years, the model was sort of like a giant field trip," Marsnik said. "Along about the E-6s or E-7s, it occurred to me that these students are very resourceful. Why are Terri and I setting up all the visits? What if we told students we expect you to set up your own visits?

"The students really do a great job of setting up their own visits. Now, I'll set up at most two full-group visits. This year we had the full group meet with Mark Flynn at his current company, GSV Labs, and Ron Johnson at Enjoy," Marsnik said.

"It was awesome to see how the alumnae/i welcomed us there," Eisenhuth said. "We were given some amazing opportunities to learn."

"It was just incredible to see how the culture worked," Derevyanco said.