Sara Hoppe had a late start on an essay she planned to enter in a contest sponsored by the Delta Phi Alpha German Honor Society.

“I could have used more time, personally,” said Hoppe, a first-year student at the College of Saint Benedict.

But things worked out just fine for Hoppe. Her paper on critical social justice – written entirely in German – placed second in the nation in the competition.

That followed a second-place finish in a separate essay contest – also in German – for an 11-state Midwest region sponsored by the Swiss Consulate in Chicago.

That paper, on Swiss author and dramatist Friedrich Dürrenmatt and the environmental destruction going on in the world today, was tied to “Hyenas,” a film by Djibril Diop Mambéty that was based on Dürrenmatt’s story “The Visit of the Old Lady.”

“I was definitely very surprised (by the honors),” said Hoppe, an English major and German minor from Freeport, Minnesota who graduated from Melrose Area High School. “My main goal was to write two papers in German and improve my writing skills. But I was very grateful for the awards.”

“Writing a persuasive essay in any language is difficult, but writing convincingly in a second language takes extra diligence,” said Kurt Hollender, visiting assistant professor of German at CSB and Saint John’s University who alerted Hoppe to both contests.

“It’s our pleasure in the CSB/SJU German section to work closely with students on these valuable and challenging liberal arts skills,” Hollender added.

Hoppe followed an interesting path in writing her two essays.

“I kind of had to flush out the ideas of the papers in English, just because my German skills aren’t phenomenal enough to think completely in German off the bat yet,” Hoppe said. “But once I started writing, I definitely had to make the transition to thinking in German so that I could get the grammar down, since the sentence structuring is not the same in German and English.

“I’m definitely not fluent yet (in German), although my hope is to be fluent. This is my fifth year that I’ve been studying German, and I would definitely say my reading and writing capabilities are a bit stronger than my speaking ability at the moment. I definitely have room to improve,” Hoppe said.

That’s not too surprising, considering her background.

“My mom (Mary, who works at the Hill Museum and Manuscript Library at SJU as a digital projects manager who is also a CSB graduate) was an exchange student to Germany and hosted an exchange student. They are still lifelong friends. I’ve met her various times, and she’s basically like my family now,” Sara Hoppe said.

“When I got to high school in Melrose, there was a German program, and so I got involved in that. I’ve hosted four students, and I was also an exchange student myself for about five weeks (in summer 2019),” Hoppe added.

Attending CSB and SJU has been a great move for Hoppe.

“I’ve kind of grown up coming here for various things and sports camps,” Hoppe said. “I did a tour here, and I loved it. I heard the English and German programs were amazing – which they are, they’re phenomenal.

“I definitely thought I’d try my hand here, and I have fallen in love with both of these programs I’m studying right now,” Hoppe said.

“In the CSB/SJU German section, we pride ourselves on matching students with opportunities like joining the Delta Phi Alpha German Honor Society and applying for Fulbright scholarships, but these distinctions usually arrive in junior or senior years,” Hollender said.

“Sara’s feats as a first-year student, in which she competed against upper class students from across the Midwest and country, is remarkable,” Hollender said. “It is not usual for a first-year student to take part in, let alone win prizes in such contests.”

Hoppe, who noted Hollender’s help in both contests, said that was typical of the German section.

“They’re wonderful. They really care about you, and they will do anything to help a student. I’m really grateful for their help,” Hoppe said. 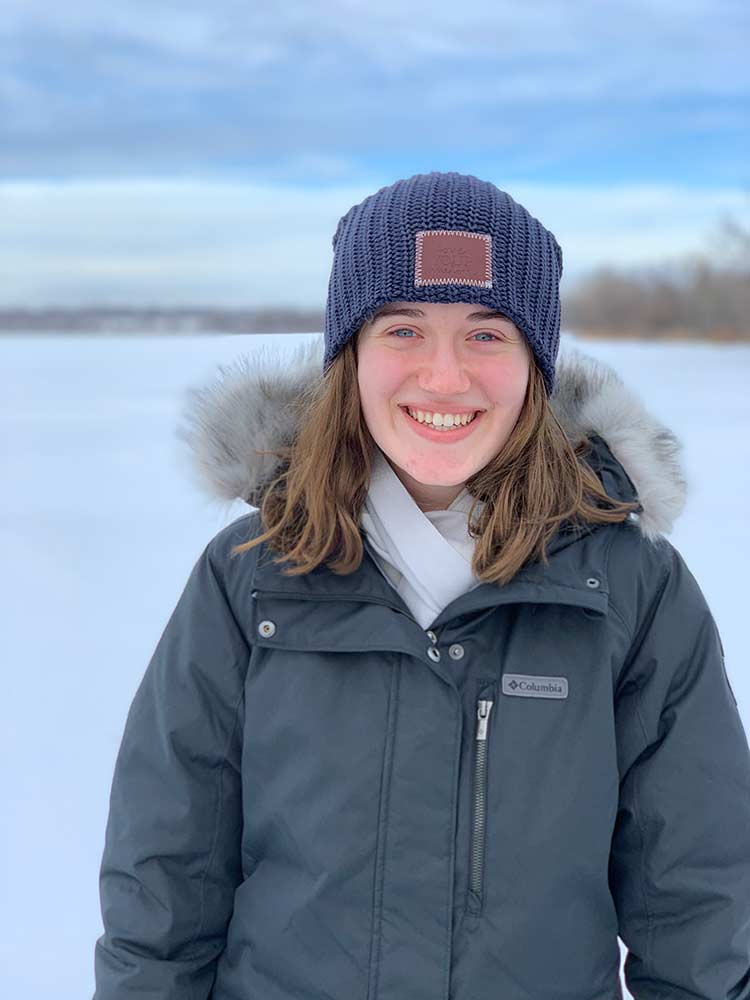 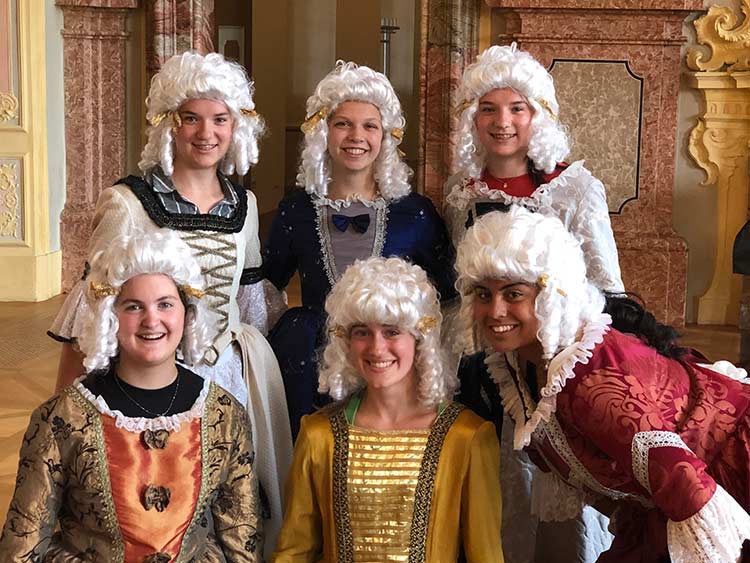 Sara Hoppe (middle of the first row) and her classmates from Melrose (Minnesota) Area High School were on a tour of Schloss Rastatt in Rastatt, Germany, and their tour guide gave them the opportunity to dress up and act out a royal dressing ceremony.