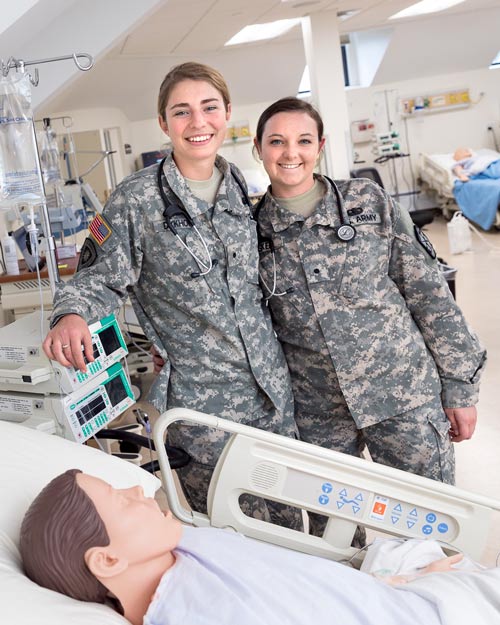 This spring, approximately 170 ROTC nursing cadets will receive their commission in the Army and report to active duty at hospitals across the world.

At the top of that list will be two College of Saint Benedict students and cadets.

“I didn’t expect it,” said Dykhoff of the ranking. “It’s really cool, you know? Just to see all the hard work you’ve put in, it paid off, and there’s something validating about that.

“There are those moments where you’re like, ‘I kind of wish I could be a normal college student,’ but I’ve enjoyed it,” Dykhoff said.

“Honestly, I was pretty surprised and humbled, and obviously excited,” Esker said. “I’m just an ordinary girl doing some everyday things. There’s nothing special about me."

“You see those high rankings and you think, “(She) must be intense or so awesome and so smart,’ but I’m really just another girl. I was really humbled, honestly. I have to give all the glory back to God. Everything I do comes from Him.”

How did the cadets achieve this ranking? Sachariason said their rankings were a combination of several factors, including their grade-point average, physical training scores and leadership abilities, plus several smaller items including if they completed a study abroad trip or have skills in another language.

The biggest part of their ranking, however, came from attending an advanced camp at Fort Knox, Kentucky, during the summer. Most ROTC cadets – male or female – attend the advanced camp, and then receive an Order of Merit Listing (OML) based on these factors.

“It’s 31 days long, and it’s very rigorous,” Sachariason said. “They’re being constantly evaluated on their leadership abilities. They take a physical fitness test, they do multiple road marches, they do obstacle courses and they do a bunch of time in the field.”

“It (the advanced camp) had its physical tests, but I thought it was mostly a mental challenge,” Dykhoff said. “I kind of had to remind myself a few times why I was really there. What am I doing? Why is this what I’m doing with my summer?

“But for me, it was an overall good experience because the people I had with me in my platoon from ROTC programs across the country were just fantastic people. They brought a lot of humor and fun to the day.”

“It was a pretty tough deal,” Esker said. “Not necessarily how I wanted to spend my summer, but it was something I had to do and wanted to do.

“It’s not bad. It’s bearable. You just kind of embrace the stuff. You meet some of the best people and you make some of the best memories of your life, even though there were a lot of times were I questioned why I did ROTC. The people you were with and their attitudes about it really makes you able to get through it,” Esker said.

The rankings mean that both Dykhoff and Esker will likely get their choice of where they will start their military careers. Dykhoff has requested to start at Fort Lewis near Seattle, while Esker hopes to go to Fort Sam Houston near San Antonio, Texas.

Both remain uncertain of what the future holds after their four-year commitment is up. They could opt to make the Army a career, join the National Guard or Army Reserve, or simply become citizens again. But both would recommend ROTC for any student interested in a possible military career.

“It takes a lot to jump into it at first and it’s a little overwhelming, but once you get into it and you start making connections – at least from my personal experience – it has been probably the best thing for me about college,” Dykhoff said.

“I’ve really enjoyed ROTC and the Army and the opportunities it has provided me so far,” Esker said. “If it continues to do that and provide opportunities that will push me toward my own goals ultimately, then I will obviously continue on,” Esker added.